As birds winter in Sri Lanka, one enthusiast makes sure their memory stays

by Dilrukshi Handunnetti on 25 October 2019

COLOMBO — His eye was trained from a young age to observe details, be it about a plant, an animal, or a legal document.

Jagath Gunawardena, a veteran lawyer and an authority on domestic environmental law, has nurtured multiple interests, taken on some of the most contentious environmental issues in Sri Lanka’s courts, and offered expertise to drive national conservation needs. But his truest passion is making field ornithological records through observations and sketching.

A serious birder and environmental educator, Gunawardena is happiest when his feathered friends make their annual winter migration to the Indian Ocean island off the southern tip of India, offering him the opportunity to observe them in Sri Lanka’s many bird-watching locations — sometimes even from his own garden.

He also takes time off with his sketchpad, to both draw and record his scientific observations of birds.

“There are many and diverse birdwatching locations in Sri Lanka. But I find newer, lesser-known places too, ideal for observing birds. There are many worthy urban spots as well,” he tells Mongabay.

His deep interest in nature protection led him to join the Young Zoologists’ Association of Sri Lanka (YZA) in 1978, the Ceylon Bird Club in 1986, and the Field Ornithology Group of Sri Lanka (FOGSL) a year later.

In October 2016, Gunawardena was conferred the title of Harithabhimani, the presidential lifetime award for his dedicated service to wildlife conservation and nature protection. He was also honored by having a newly described frog species from the country’s central highlands named after him Pseudophilautus jagathgunawardanai, or Jagath Gunawardena’s shrub frog.

Sri Lanka is home to 439 bird species, 33 of them found nowhere else on Earth, including breeding residents and migratory species.  The island offers varying microclimates and habitats that provide a temporary refuge for the visiting species, though over the years, declining forest cover has impacted the distribution pattern of both resident and migratory species.

At around this time of the year, the latter can be sighted in various locations, ranging from rainforests, home gardens and reservoirs, to lagoons, marshes, plains and riversides.

This is also the time when Gunawardena steps outdoors with his sketchpad.

In the winter months, this completely arboreal bird is found mostly in the low-country wet zone, perched on the highest branches of a tree: “A vantage point to identify and assess prey,” Gunawardena says.

A sophisticated marker of territory, these long winged, short-tailed, short-beaked birds generally make loud chirps in the morning and evening; if they cry excitedly during the day, that’s often an indicator of rain to come. 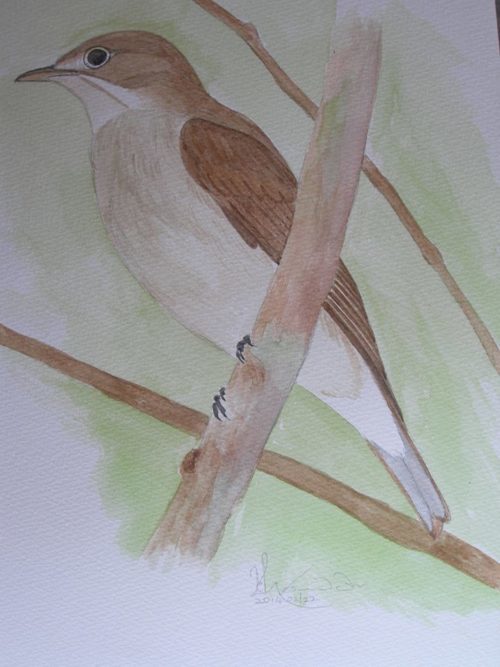 A similar migratory species, Layard’s flycatcher (Muscicapa muttui), also known as the brown-breasted flycatcher, is a small bird that breeds in northeastern India. Fluffy-breasted and olive brown in color, this bird was formally described by a British administrator, E.L. Layard, who was serving the British crown from Point Pedro, in the island’s north.

The bird was first brought to Layard’s notice by his native cook, Muttu, who presented a dead specimen for a closer look. The cook’s name was retained in the bird’s scientific name.

Initially considered a local species, it was much later discovered to be migratory.

Often found in forest habitats or well-shaded home gardens perched on lower branches of a tree, its preying behavior is to swiftly descend to the ground to catch prey, which include insects and the occasional lizard and earthworm. 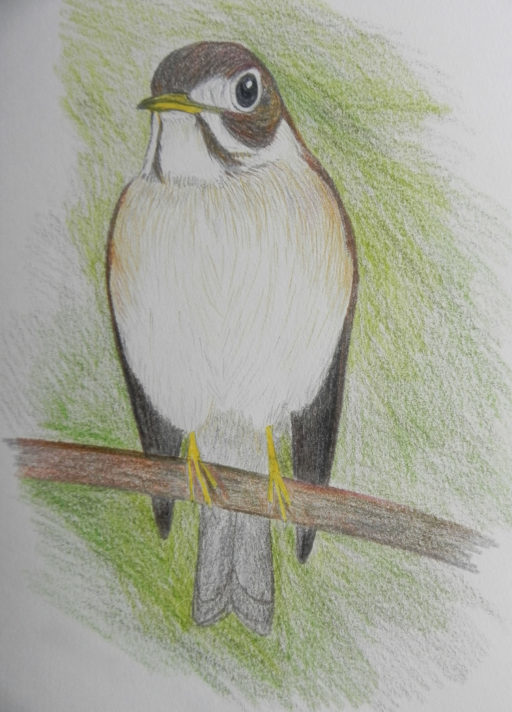 Gunawardena saw a few during the 2018 winter migration, sighting several of them even in the south of Colombo, the commercial capital.

Though sometimes widespread and found in large numbers in the cold months, in some years the flocks are rather small, he observes.

It’s a much-photographed bird, but Gunawardena’s is likely to be the only local painting of it. 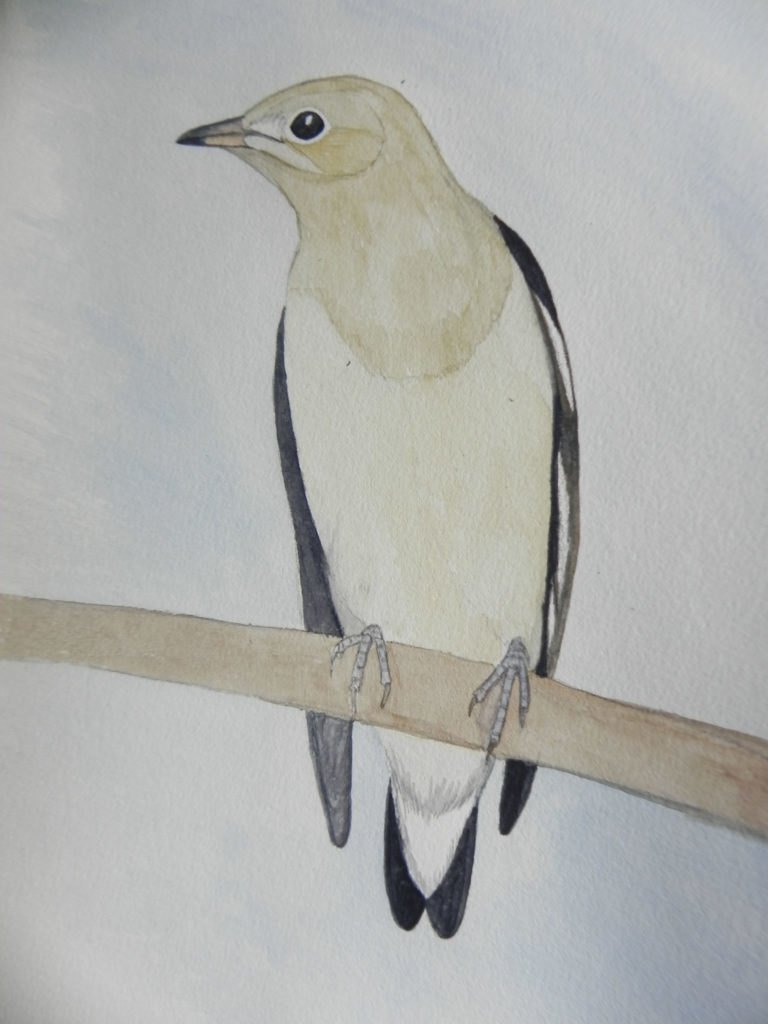 A beautiful migratory songbird, the blue and white flycatcher (Cyanoptila cyanomelana) was first sighted by Gunawardena at the entrance to the Sinharaja forest reserve.

While there are many photographs of this eye-catching bird, Gunawardena’s watercolor work is considered the only local drawing of the bird. 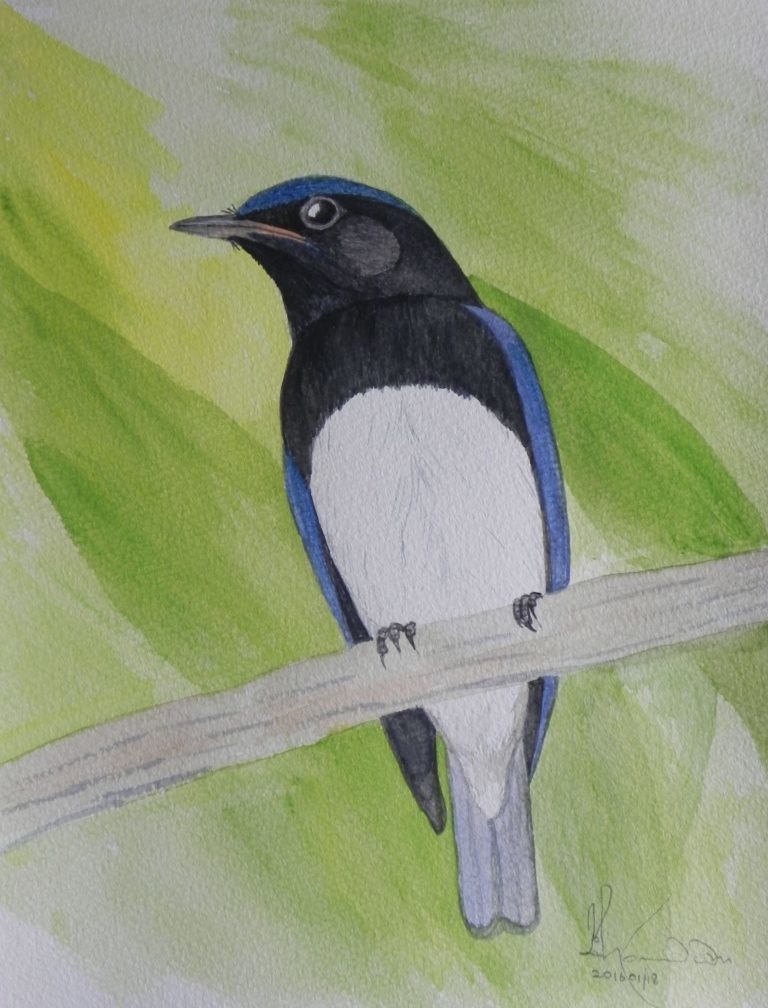 This bird, known also as rose-colored starling or rose-colored pastor (Pastor roseus), shows a stark contrast in its winter and breeding plumage, more visible in the males. The adult male is quite dull in appearance in winter months, but during breeding develops a black head, neck and throat, with an erectile crest of elongated feathers on its head.

Very conspicuous is its bill turning total pink with a black base during breeding season. It’s quite irregular as migratory species go, with large flocks in some years but very rare in others. It shows an unusual attraction toward garbage piles for feeding. 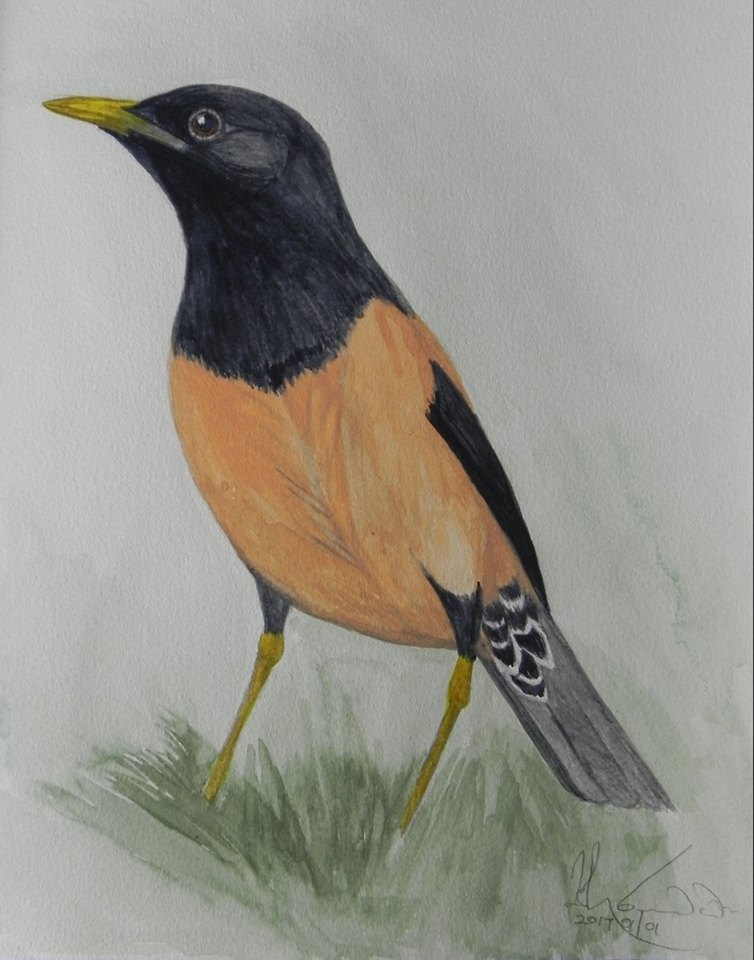 A bird found mainly in Asia, the brown shrike (Lanius cristatus) is sometimes referred to as a “butcher bird” due to its preying habits.

A regular late arrival, reaching the island in early to mid-October, these are fiercely territorial birds, feeding on a variety of insects. They often drive other bird species away, once they mark their territory, by adopting aggressive behavior.

It is able to eat hard-bodied insects like beetles due to a specialability to crush the insect’s body with its strong beak.

After arrival, they make shrill morning calls to announce the marking of territory. As the bird settles in its winter habitat, the calls grow soft and infrequent. 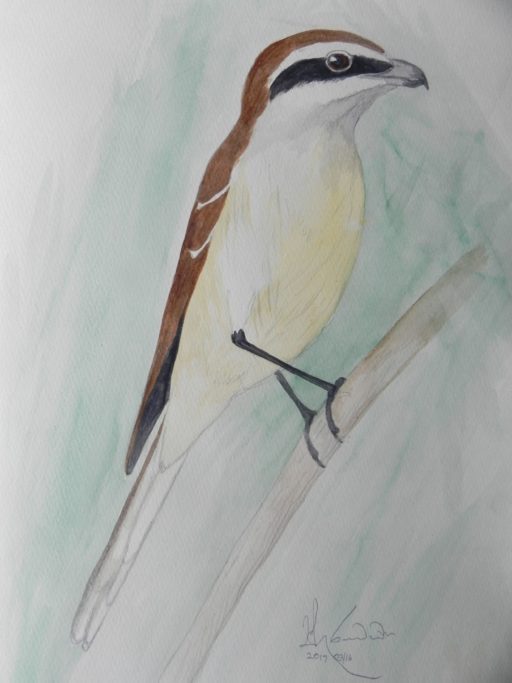 These birds, closely associated with the barn swallow that travels in large numbers, can be easily identified by the brown band across the breast, deep-forked tail, and brown back. They are active during the day and are often perched high. 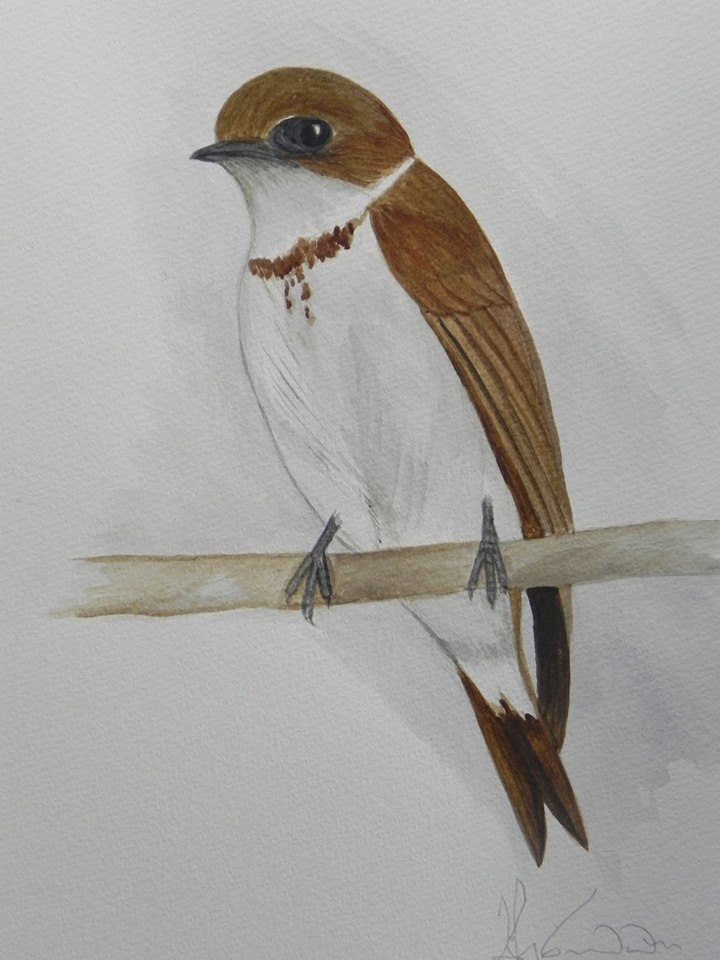 This medium-sized heron, also named the Malayan night heron (Gorsachius melanolophus), makes its winter arrival in September and leaves by March or April. It heads inland, and after a short rest, makes for the island’s forested hills.

One of the most aggressive migrants, it can launch vicious attacks with a strange neck movement and by using its strong beak as a powerful weapon. It attacks bright objects or, in the case of humans, generally the eyes.

When Gunawardena once tried to photograph the bird with a colleague, it tried to attack the camera lens, displaying several attacking positions before drawing near. “Here’s a bird to watch against,” Gunawardena says. 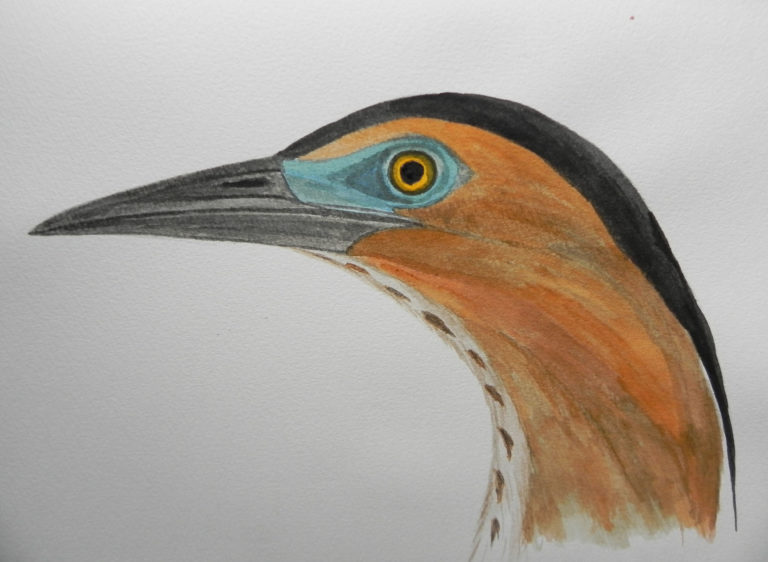 A small bird species found close to water bodies or in them, the white-winged black tern (Chlidonias leucopterus) shows a stark difference between its summer and winter plumage. Non-breeding birds and juveniles are white with gray patches and pretty black earmuffs.

They arrive in mid-September and stay on until the end of April. By then, they display their breeding plumage and sport short red legs and black bill.

These birds can be easily observed during winter months in the near the Bellanwila and Kotte marshes in Sri Lanka’s Western province, where they prey on fish and other aquatic creatures by darting into the water. 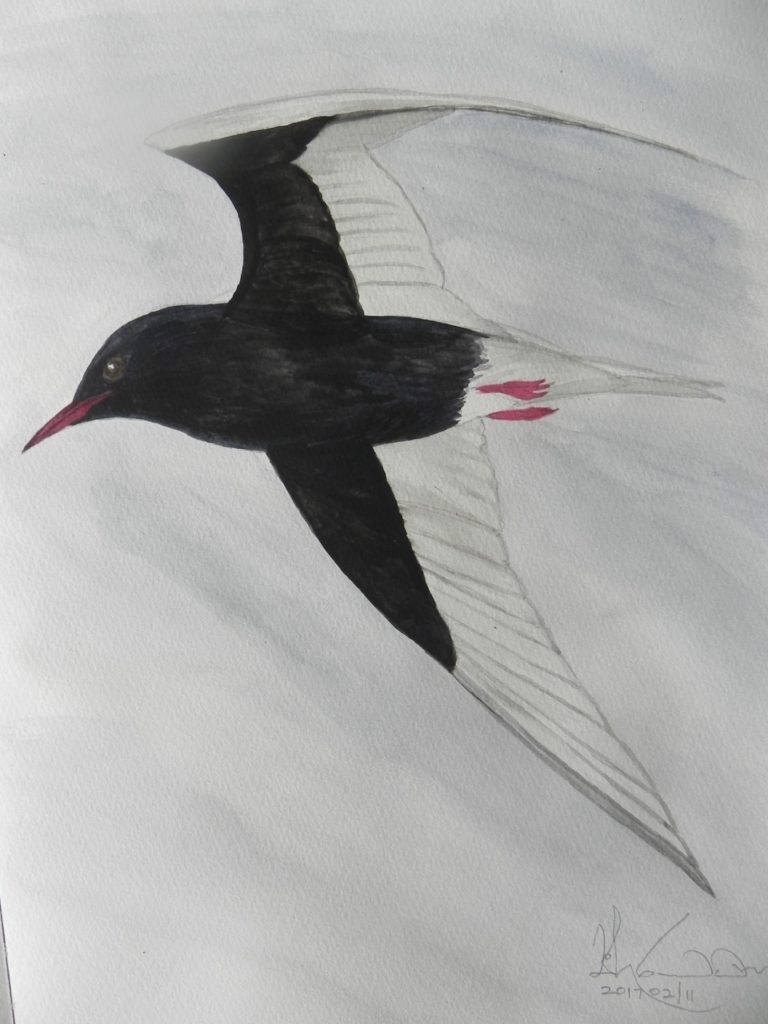 The Kashmir red-breasted flycatcher (Ficedula parva) spends its breeding summer months in the northwestern Himalayas in India’s Kashmir region, and travels to Sri Lanka for a six-month winter stay.

From the time it arrives in September, it makes a home in the highest peaks of Sri Lanka, the cold hilly regions of this tropical island.

Gunawardena says there should be more studies as well as habitat conservation efforts for this beautiful winter visitor.

“This bird spends exactly half a year in Sri Lanka and should be given equal significance as to an endemic species. In winter, these birds migrate only to Sri Lanka and ideally, there should be joint conservation efforts with India,” he says.

Controlling the high use of pesticides and general conservation of its habitat are key to ensure the survival of this unique migratory species. 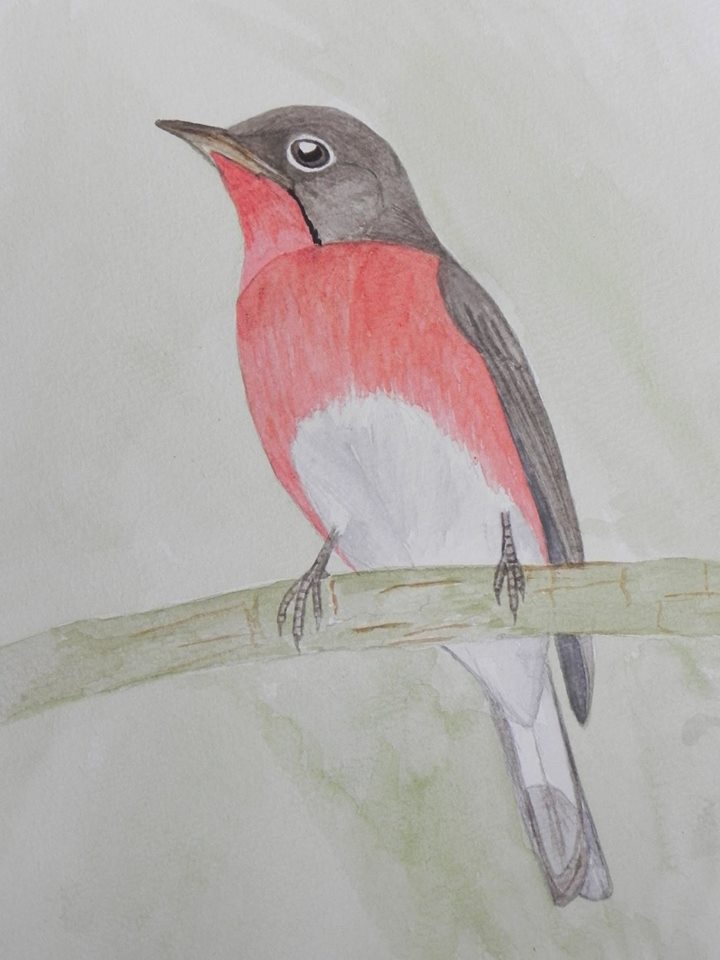 The golden or Eurasian oriole (Oriolus oriolus) is a shy arboreal bids, often found hiding behind leaves. The male has striking black and golden plumage, while the female is a drab green hue.  “The Eurasian oriole is slightly bigger than the resident cousin (the black-hooded oriole, Oriolus xanthornus) and its golden yellow sheen is brighter. It is also the most well-known of orioles out of the two migrants and one resident species,” Gunawardena says. 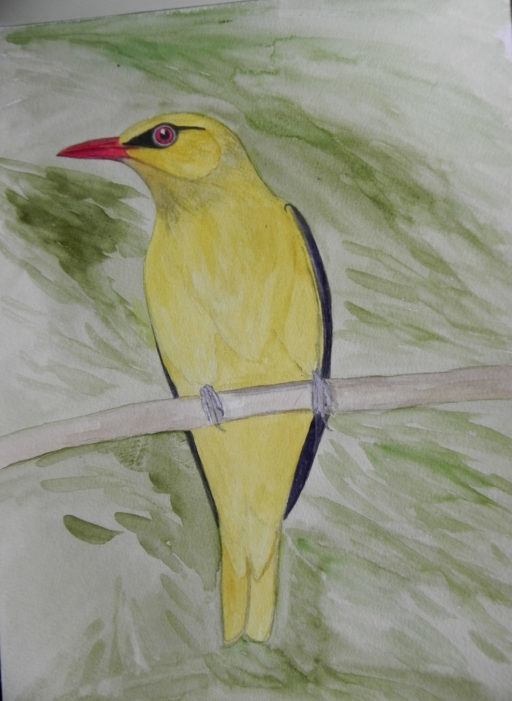 Gunawardena’s water-color painting of the male show an unusually shaded beak, meant to catch insects — or quickly shovel in, hence the name. The female shoveller is completely brown and rather dull in comparison.

During breeding, the male’s head turns to a dark black and a glossy green sheen develops. A regular migratory species in small numbers to Sri Lanka, it’s found in the lagoons and coastal habitats of Sri Lanka’s dry zone.