JAKARTA — A severely injured and malnourished orangutan has been rescued from a plantation near a Sumatra forest where a hydropower project threatens the only known habitat of this particular species of great ape.

Locals spotted the male Tapanuli orangutan (Pongo tapanuliensis), believed to be about 30 years old, inside a plantation in Aek Batang Paya village, South Tapanuli district, on the edge of the Batang Toru forest. They reported it to the local conservation department, known as the BKSDA, which then enlisted the Orangutan Information Center (OIC), a conservation NGO, to help confirm the finding.

Officials from the BKSDA and OIC traveled to the site on the night of Sept. 18 and found the badly injured orangutan in the plantation the next morning.

“Our medical team found injuries that are very critical because there is a gash on his head,” OIC head Panut Hadisiswoyo told Mongabay. “There is also a big stab wound under his left armpit.

“Our team suspects that the wounds were caused by sharp weapons. If the injuries were a result of the orangutan fighting with other animals, then there should be scratch wounds, not stab wounds,” he said, emphasizing that the orangutan had most likely been attacked by humans.

The attack appears to have occurred several days earlier, given the condition of the wounds, Panut said.

“His wounds were already infested with maggots,” he said.

The BKSDA and OIC officials immediately evacuated the orangutan to a quarantine center managed by the Sumatran Orangutan Conservation Programme (SOCP) for medical treatment.

It’s not immediately clear who could have attacked the orangutan, although it’s common for the animals to be shot at and hacked by farmers who consider them a pest. 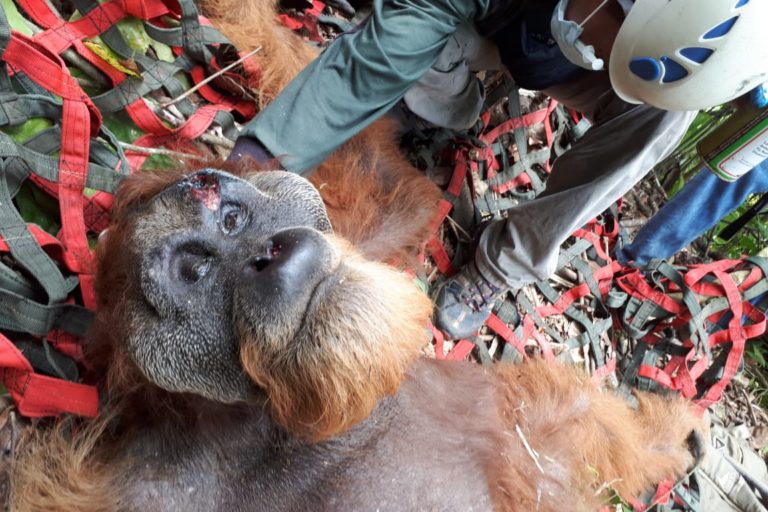 A deep gash is clearly visible above the left eye of the male Tapanuli orangutan found in a plantation in northern Sumatra, Indonesia.

This isn’t the first time a Tapanuli orangutan has been found outside the Batang Toru ecosystem, the only known habitat of the critically endangered species but also the site of a controversial hydroelectric power plant project.

A year ago, Indonesia’s Ministry of Environment and Forestry reported that preconstruction activity for the dam and power plant had driven a group of Tapanuli orangutans out of their habitat and into nearby plantations.

“So it’s already proven that the project has already dealt an impact,” Wiratno, the ministry’s director general for conservation, told Mongabay at the time. “While there’s no casualty yet, it’s an indication that the project must have had an impact [on the orangutans].”

Panut said this latest discovery — in a plantation just 2.5 kilometers (1.55 miles) from the hydropower project site — should serve as a wake-up call for the government to protect the ape’s habitat by designating the Batang Toru ecosystem a protected forest. The Tapanuli orangutan, described in 2017 and already teetering on the brink of extinction, lives in pockets of the 1,338-square-kilometer (516-square-mile) Batang Toru ecosystem. The habitat has been fragmented by infrastructure projects such as roads, causing the population of the orangutans to plummet by 83 percent over the course of three generations.

Fewer than 800 individuals are believed to survive in a tiny tract of forest less than one-fifth the size of the metropolitan area that comprises Indonesia’s capital, Jakarta.

Due to this APL designation, these areas aren’t protected and thus are at risk of encroachment or being cleared for industrial purposes, including the $1.6 billion hydroelectric plant and dam. The 510-megawatt plant was announced in 2012 and will be the largest in Sumatra if completed as planned by 2022.

The Indonesian government considers it a priority project under President Joko Widodo’s wider infrastructure-building push. The government argues that the plant is needed to provide electricity from renewable sources in the region and to mitigate climate change. The project’s developer, PT North Sumatera Hydro Energy (NSHE) says the plant will prevent the release of up to 1.6 million tons of CO2 every year from Indonesia’s coal-reliant grid.

Panut said it was possible that the injured ape had been fleeing from forest-clearing activity around the project site.

“Maybe there’s a connection with forest clearing, whether it’s because of agriculture or because of the hydropower plant,” he said.

That gives added urgency to designate the area as protected, he added.

“Even though the area has an APL designation, it’s still the habitat of the orangutan,” Panut said. “More and more forests are being cleared in the area because of the APL designation, when it should be a protected forest area.”

In response to the discovery of the injured orangutan, PT NSHE spokesman Firman Taufick said it wasn’t unusual for the apes to wander into nearby plantations in search of foods. He added that such behavior was known even before construction of the dam began.

“Based on observations by locals since decades ago, when it is fruit season, like the current durian season, orangutans always come to locals’ plantations,” he told Mongabay. “So it’s not only this time an orangutan enters a local’s plantation.”

Firman added that the company condemned the injuries to the animal and would continue its conservation program to protect the orangutans.

“We see that the locals of South Tapanuli have local wisdoms in protecting the environment and wildlife,” he said. “In this case, we have empowered the locals with a conservation program, including wildlife, by conducting training and by forming conservation groups based on local wisdoms. The efforts to protect wildlife in the Batang Toru ecosystem are the responsibility of all parties, not only the government and the private sector.”

Earlier this year, the International Union for Conservation of Nature (IUCN) called for a halt to all projects that threaten the Tapanuli orangutan.

“IUCN is deeply concerned about ongoing and new threats to the Critically Endangered Tapanuli orangutan in Sumatra, Indonesia,” the organization said on its website.

While the IUCN didn’t specifically mention the hydropower project in its statement, it recommended that all projects affecting the apes should be halted to allow time to formulate a plan to save the Tapanuli orangutan. Such a plan, the IUCN added, should be based on an independent and objective population- and habitat-viability assessment.

Primatologist Serge Wich of Liverpool John Moores University, who discussed the dam project with the IUCN before the latter issued its statement, urged PT NSHE to follow the IUCN’s recommendation.

“But the company never agreed to that,” Wich, who is also the co-vice chair of the section on great apes of the IUCN/SSC Primate Specialist Group, told Mongabay. “For me, the fact that the company doesn’t want that is a clear indication that they’re not interested in mitigation. They just want to go ahead with the project and secure financing.”

Clarification 9/23/2019: This article originally ran with the headline ‘Orangutan found injured in apparent escape from site of hydropower project’. It has been changed to reflect that injury during escape from the hydropower project site is just one possible explanation for the ape’s injuries.

Banner image of an injured Tapanuli orangutan being rescued from a plantation in northern Sumatra, Indonesia. Image courtesy of the Orangutan Information Center (OIC).