The music of the Chilean band Newen Afrobeat is a vibrant mix of musical cultures, an energetic take on the Afrobeat musical style made famous by Nigerian star Fela Kuti with a Chilean sensibility that’s supported by a large horn section and an array of percussionists.

The group has collaborated with members of Kuti’s extended family and toured around the Americas, with a recent highlight being a “stunning” set at this summer’s Montreal International Jazz Festival, as noted in a wide ranging interview with award-winning National Public Radio show Afropop Worldwide.

Their three albums released to date celebrate the environment, indigenous rights, women’s empowerment, and multiculturalism with incredible energy, soaring vocals, and tight musical direction, which piqued the interest of Mongabay, so we reached out to percussionist Tomás Pavez to learn more.

Pavez was born in Santiago, Chile, in 1987. A self-taught musician, he plays clave (jam blocks, wood blocks, and cowbell), Kpalongo-style Nigerian drums, and shekere. A co-founder of the band with Chilean composer/singer Nicolas Urbina in 2009, he has seen the band develop into the inspired unit we see today.

Mongabay: You combine influences like Fela Kuti and Afrobeat with your Chilean sound and style, why is that cultural celebration important?

Tomás Pavez: It is so important because of the times we are currently living in, where everything merges. We have to carefully embrace culture as a whole rather than creating separation. Things happening in Chile are not in reality apart from what essentially goes on in the rest of the world.

Indigenous peoples and their struggle for rights are referenced in songs like Chaltumay, whose video was made at a historic conflict zone between the Mapuche people and the Chilean government. Why?

Yes indeed, it is an ongoing struggle since colonial times. Back then it was about Spaniards conquering the land, nowadays it’s about territorial and cultural respect, so traditions aren’t lost because of private interests overtaking beautiful landscapes, as featured in the Chaltumay video.

Chileufú eternal river land of poets / this land breathes ancestral wisdom / by force of hand and rifle / they snatch these territories / According to supposed favorable agreements / For whom? we asked / And why? / When did ambition devour the root?

How has the Chilean State treated the Mapuche?

They don’t recognize limits, and sacred lands where families have lived through centuries are taken away to make way for hydroelectric dams or logging companies.

Why does Newen Afrobeat talk about ecology in its music?

We see nature as a getaway from the fast city life, we really need it as a connection to our roots and as a reminder that we have to be awake to make changes for a better quality of life.

Why did you personally become interested in the environment?

When I was little I always liked to go hiking with my father, and as I grew up I got to appreciate nature more by learning how to grow food, learning about plants and their needs as living beings.

The song Cántaros is a celebration of feminine energy and water as a life-giving element. Why was the video recorded by the dry Copiapó River?

There is an environmental issue with the Copiapó River. The mining business is a big thing throughout Chile, mostly in the north, but it needs too much water. So this river is starting to dry up.

We are pitchers that sing / we are crock pitchers that dazzle / mammalian fireflies, biological nature / Little ivory light that dances with the moon / magic goldfish of fresh and pure water / fertile garden rose / seed that gives life / Blood delirious with passion / trace of rebellion

Other themes in your music are equality, migration, and women’s empowerment. Are your fans supportive of these issues?

Yes they are, it’s the reality around the world. Everyone has a right to live without feeling discriminated against, and women have always fought for better and equal conditions. Sharing knowledge of this is [about] revolution. 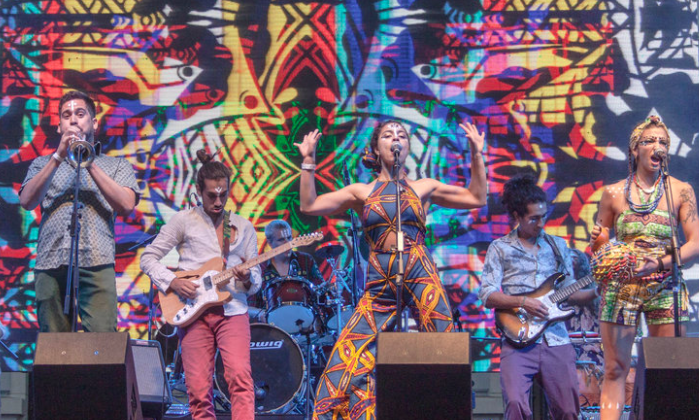 Do activists use your music to raise awareness?

Some do give recognition to certain song lyrics, and most people like very much our first album’s opening audio track, where José ‘Pepe’ Mujica, the former president of Uruguay, talks about having a futurist outlook on our actual human conditions.

What are other important themes of your music?

Taking a good look at us as human race, recognizing what the past has taught us, so we do not keep doing the same things over and over.

Banner image: the band during shooting of the Chaltumay video, image by Alejandro Espinoza and Marcela Toledo.