FREETOWN, Sierra Leone — The Sierra Leone government closed the country’s waters to fishing during the entire month of April to give flagging fish stocks a chance to rebuild. During that period industrial fishing companies were not allowed to fish, but artisanal fishers were.

Both industrial and artisanal fishers appeared to support the closure, the first of its kind, amid declining catches and an influx of virtually unregulated foreign fishing vessels that locals complain are wiping out fish stocks and putting them out of business. Officials declared the closure a success, as part of Sierra Leone’s broader effort to formalize and gain regulatory control of its fisheries. However, outside experts have expressed doubt that the move would do much to improve the country’s fisheries.

The fisheries minister, Emma Kowa Jalloh, said at a March 28 press conference that the main reason for the closure was to give the fish an opportunity to breed. She expressed concern over the numerous challenges the country is facing as a result of illegal, unreported and unregulated (often called IUU) fishing.

Kowa Jalloh said the government is taking a suite of measures beyond the one-month closure to ensure the country’s enormous fisheries potential is fully harnessed. Among them, she said, will be pushing for co-management of the country’s fisheries by stakeholders from industry, government and civil society; improving the reliability of data to enhance marine resource management; registering artisanal fishing boats; and appointing a national master fisherman to handle the affairs of fisherfolk. She pointed to a newly built fish-landing facility in the town of Tombo as an example of progress.

In addition to the closed season Jalloh described the ministry’s restriction of industrial trawlers from working within 6 nautical miles (11 kilometers) of shore and the designation in 2012 of four marine protected areas closed to certain kinds of fishing. Seven years on, however, these protected areas have yet to be implemented. She also pointed to efforts to make artisanal fishing more sustainable by training local fishermen to report crimes to the authorities.

Despite the difficulties, the fishing sector is growing: according to Jalloh, in 2012 a comprehensive canoe registration effort recorded 10,700 canoes; in 2018 the number had grown to 12,000. “Everybody sees fishing as a lucrative business; you go in the morning, by the time you come back in the evening you have something to sell and make money,” Jalloh said.

Despite taking a hit to their bottom lines, the country’s industrial fishing sector cheered the recent closure. “The close season affected our business; certain overheads have to be covered by our own reserve,” Bassem Mohamed, president of Sierra Leone’s industrial fishing association and managing director of Freetown-based Sierra Fishing Company, one of the country’s top seafood suppliers, told Mongabay. “But in the end we support the idea because it is a big step the government took to tackle the challenge of fish depletion.”

An artisanal fisherman from Tombo, Mohamed Suma, said he and his colleagues were elated about the closure. For the first time, he said, locals felt the government was concerned about them and had taken a step to protect their interests. “The closed season is relevant for the restoration of the fish stock; however, the period is too short,” he told Mongabay.

According to Suma, things have gotten so bad that fishermen now spend days at sea, only to return with smaller catches than before. He outlined a number of grievances against the industrial fishing vessels: encroachment into the coastal zones meant for exclusive use by artisanal fishers, accidental yet costly destruction of artisanal fishers’ gear, and tragically, collisions at sea that have injured and killed artisanal fishers. He called on the government to take immediate action to protect artisanal fishers’ interests and safety.

Officials were likewise positive about the effect of the closure. A public notice from the ministry declaring the end of the closed season states that the navy, Joint Maritime Committee, Maritime Police and Artisanal Fishermen Consortium monitored the waters during the closure, and a specially formed task force monitored the supply chain to ensure no illegally caught fish entered.

“I consider the closed season a success; for the first time in the history of Sierra Leone there is a breathing space for fish,” said Salieu Sankoh, director of the World Bank’s West African Regional Fisheries Program (WARFP) in Sierra Leone, which funded two seven-day surveillance boat patrols during the closure. “You will liken it to every day 10 thousand boats are in the sea running after these fish stocks and about 100 industrial fishing boats rove those waters 24 hours, chasing the same fish stocks.”

Since 2010 the World Bank has been attempting to assist Sierra Leone and other West African countries improve governance and sustainable management of their fisheries and reduce illegal fishing. This has included helping artisanal fisherman develop local bylaws that restrict fishing using certain kinds of gear and during certain days, according to Sankoh.

A key principle of the overall effort has been controlling access to fish stocks, he said. “In Sierra Leone people don’t need to obtain permission to engage in fishing activities, so one can build a canoe in the morning and go fishing the evening,” he said. 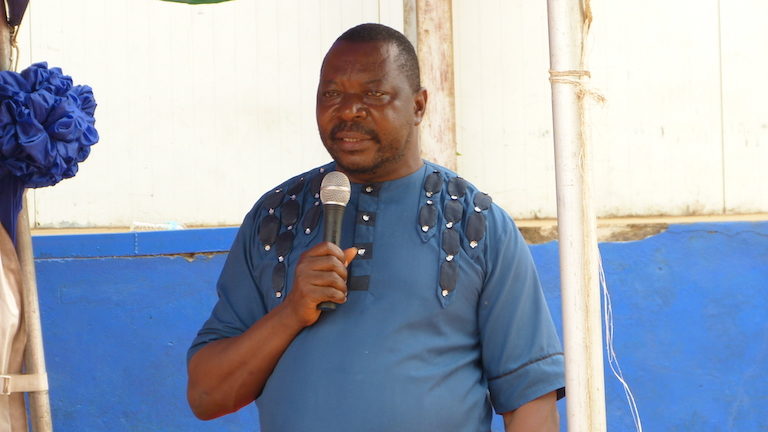 However, not everyone was so optimistic about the effect of the closure. “A fishery closure is always welcome, but it has to make sure that it is long enough, and that backdoor fishing (illegal fishing) is controlled,” Dyhia Belhabib, a fisheries researcher at the NGO Ecotrust Canada, with expertise in the fisheries of West Africa, including Sierra Leone, told Mongabay in an email. “If we look at the case of Sierra Leone, and how rampant illegal fishing is, there is no way a one-month ban of industrial fishing achieves much.

“Even if it did, and even if there was effective control of all fishing (legal and illegal), the moment the fishery opens again, the fishing frenzy by industrial vessels will start again,” Belhabib added.

She said about 20 percent of the industrial vessels licensed to fish in Sierra Leone have been involved in criminal activity and nearly 80 percent of fishing companies operating in the country have vessels involved in IUU fishing — and that’s not counting unlicensed vessels. “We are talking about banning high risk vessels from fishing in a country where MCS [monitoring, control and surveillance] is relatively weak,” she said, adding that satellite tracking of automatic identification system signals from fishing vessels indicated there was plenty of fishing taking place in Sierra Leone’s waters during the April closure.

“While I think that a fishing ban for industrial vessels is urgent, if this ban is not accompanied with a strong monitoring control and surveillance strategy, it may only increase illegal fishing and mask its effects,” Belhabib said.

Weak enforcement of fisheries laws is an acknowledged problem in Sierra Leone. According to a fisheries ministry official who requested anonymity to avoid putting their job at risk, even when illegal fishing vessels are detained, no sooner they are brought to shore than they are released again. “Our efforts seem futile, and there is not much we can do, as the orders from above upturn our good work,” the source told Mongabay. “Mostly, we are caught between the lines; they see us as the bad people,” the source said, referring to upper-level ministry officials.

Uzman Unis Bah’s work has been featured in print and online in Pan African Visions Magazine. He holds a bachelor’s degree in mass communication from the University of Sierra Leone and a certificate in media campaigns for development and social change from the Radio Netherlands Training Center. In 2018, he represented Sierra Leone at the forum for Internet Freedom Conference in Accra, Ghana.