All that glitters: Cameras spot Asian golden cat in more than one shade

When Sahil Nijhawan and his colleagues placed cameras across the Dibang Valley in the northeastern Indian state of Arunachal Pradesh in 2014 and 2015, they hoped to learn about the many different species of wild animals that live there. What they found among the downloaded images was a bit more unexpected.

The cameras, placed throughout protected forests as well as community forests governed by the Idu Mishmi people of the Dibang Valley, captured what appeared at first to be several different types of similar-sized cats. The dilemma with the cats was that Nijhawan’s team wasn’t sure what they were looking at.

“We had no idea whether they were the same or different species,” Nijhawan, a conservation anthropologist and a British Academy fellow at University College London and the Zoological Society of London, told Mongabay.

The team was confused in particular by two kinds of cats in their photos: one that was spotted, also referred to as ocelot, and one with tightly rosetted patterns on its coat. These patterns resembled those of species like the leopard cat (Prionailurus bengalensis) and clouded leopard (Neofelis nebulosa), Nijhawan said, but the sizes of the cats didn’t quite match up.

So the researchers scanned through every cat photograph their cameras had captured, analyzed the cats’ physical features, and researched about the natural history of all species of wild cats previously known from the Dibang Valley region. In the end, they concluded that many of the different-looking mid-sized cats in the images were, in fact, all from the same species: the Asiatic golden cat (Catopuma temminckii).

In all, the cameras yielded 75 independent photographic records of the golden cats, with six different coat colors, the researchers report in a new study. Five of the colors — golden, gray, cinnamon, melanistic (black) and ocelot (spotted) — have previously been described from different parts of the species’ distribution across Asia. In the Dibang Valley, Nijhawan and his colleagues captured all five forms, plus a previously unrecorded dark pattern of tightly spaced rosettes.

“Although it has long been known that the golden cat has various morphs, that the Eastern Himalayas, especially Arunachal Pradesh holds the highest variation (so far) is great news,” Shomita Mukherjee, a small-cat expert and principal scientist at the Sálim Ali Centre for Ornithology and Natural History, who was not involved in the study, told Mongabay. “The cinnamon and patterned forms have been photographed from Eaglenest Wildlife Sanctuary in West Kameng district of Arunachal Pradesh too.”

The Idu Mishmi people, some of whom were part of Nijhawan’s research team and co-authored the paper, know of the cat’s golden form and refer to it as Apongo in the Idu language, Nijhawan said in an email. “But there was confusion regarding some other morphs. For instance, they made no distinction between the melanistic morph (called aamraa-ma) of the golden cat and the melanistic leopard. [For] the Idu, the melanistic morphs in particular are carriers of great powers and they observe a strict taboo on hunting all felines.” 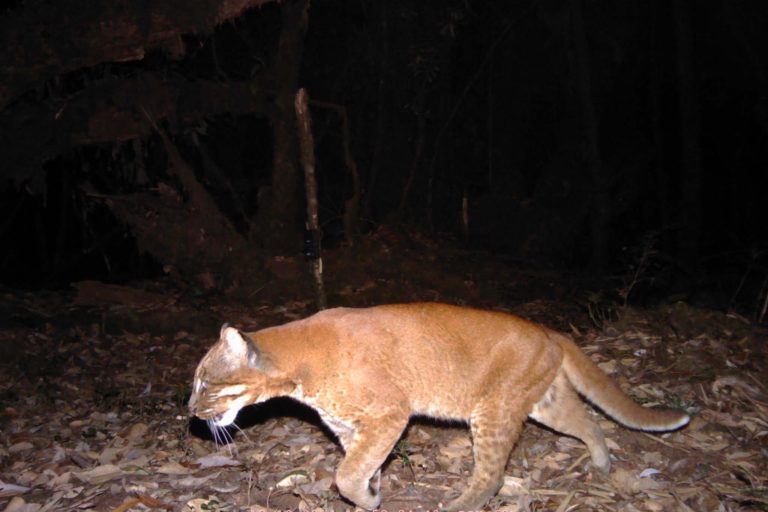 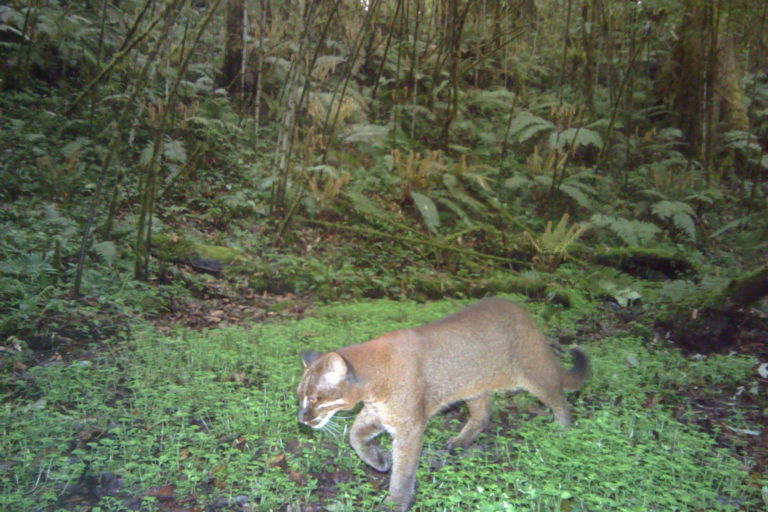 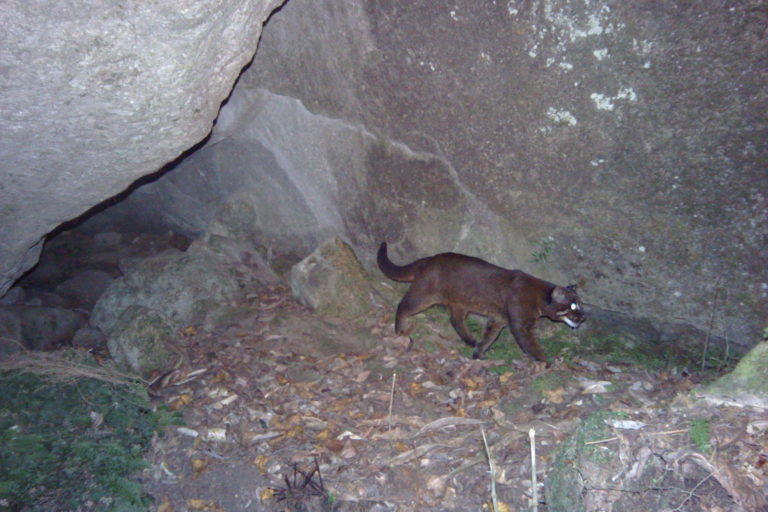 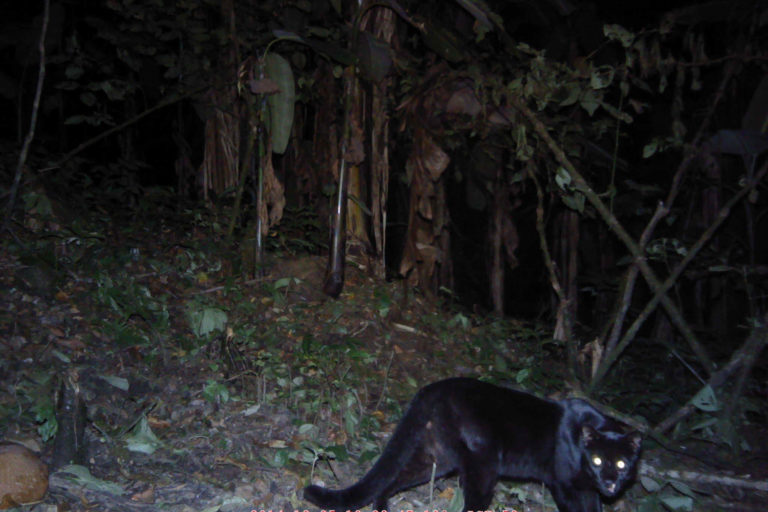 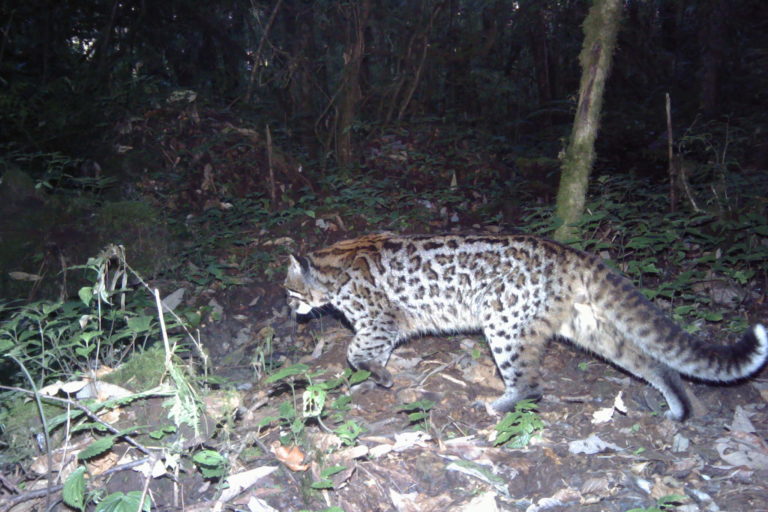 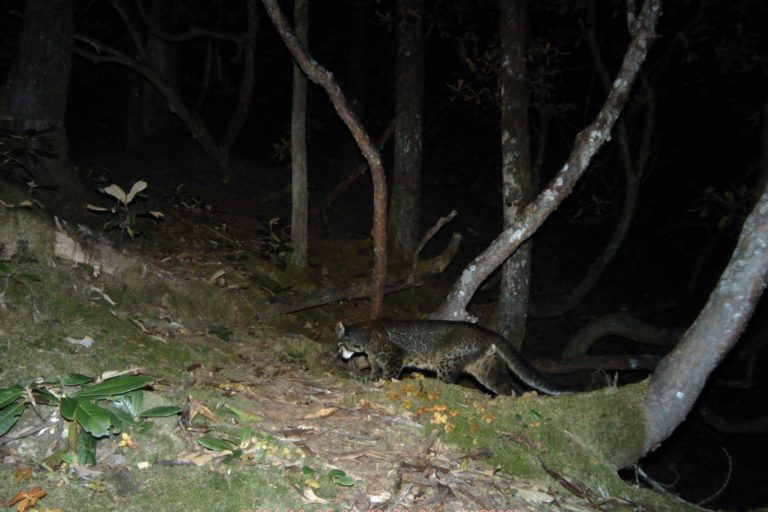 Mukherjee said the cat’s colorations show more of a continuum rather than clear-cut distinct forms. “One golden cat seemed to have bits of all colors and the pattern — so the morphs seem to be in a continuum of colors and pattern which is expected if the trait is plastic, that is, it changes with environment,” she said.

If that’s the case, Mukherjee said, then that could complicate how researchers define each color and pattern. For example, when does golden become gray or cinnamon? “There are several shades in between and each study has its own definition,” she said.

Similarly, what about golden cats with golden coats but markings on legs? “Perhaps a standard chart of colors and patterns is required,” Mukherjee said.

Different brands of camera traps may capture colors differently too. “Added to that would be the ambient light conditions which would also add to the complexity,” Mukherjee said. “Some cameras that operate on the infra-red option in the night do not capture color and if certain color morphs are more active in the night as shown in this study, the information will be lost.”

What is clear, though, is that the Asiatic golden cat shows quite a bit of variation in its coat color, especially in Arunachal Pradesh. Why?

Nijhawan and his colleagues set out to answer this by analyzing their data further. They found that while the golden form seems to be the most widely distributed, as previously thought, there was a broad overall pattern to where all the other different forms occurred.

The Dibang Valley has a wide range of habitats, from wet tropical forest at lower elevations to montane forest in mid-latitudes and rhododendron forest, alpine scrub and pasture at high elevations. The more patterned forms like the tightly rosetted and ocelot tended to occur in higher elevations of more than 3,000 meters (9,800 feet), the researchers found. By contrast, golden cats at elevations below 1,700 meters (5,600 feet) displayed more of the solid forms: golden, cinammon and melanistic. These cats also appeared to be active at different times of the day. While the two patterned forms and the gray-colored golden cats seem to be only active at night, the other solid forms are active throughout the day.

These patterns suggest that “each color morph was specializing in the habitat where it was most successful in terms of hunting, avoiding competition with other co-predators and overall success of survival,” Nijhawan said. In short, the different forms allow the golden cat to be extremely adaptable. And this adaptability, the researchers say, could have something to do with both the diverse habitats and competition with bigger cats such as tigers (Panthera tigris) and clouded leopards.

“In this study we speculate that polymorphism makes the golden cat very adaptable,” Nijhawan said. “In an environment as competitive as the Eastern Himalayas, the golden cat has shown that adaptability is what you need in order to thrive.”

Mukherjee said this hypothesis would need to be tested against other possible explanations. Could climatic factors like temperature or light conditions be determining the cat’s range of coat colors, for instance? “This could be at the developmental or growth stage of the cat — from kitten to adulthood — that determines what the coat color or pattern would be depending on the temperature or light conditions in the habitat. This can be a neutral process with no adaptive value or benefit, or it may carry a benefit,” she said. Individual cats could also be changing hues over their lifetime — this would need to be studied too.

Whether the different coat colors and patterns give the Asian golden cat a competitive edge or access to different prey can be tested in parts of Arunachal Pradesh where they don’t share a habitat with tigers and leopards, Mukherjee said. One such site is the Eaglenest Wildlife Sanctuary. Similarly, the time of day during which the different-hued cats are active could be linked to when their prey are active, and not necessarily to the presence of competitors or predators, Mukherjee added.

Many questions remain. And answering them will require more research and collaboration. The golden cat’s range in northeast India is poorly studied, Nijhawan said, and “further research might reveal more information about how color morphs are adapting in response to habitat variation and co-predator competition.”

“Perhaps a larger study across its global range, not just the Himalayan region, would reveal further insights,” Mukherjee said. “This would require a large collaborative effort but can begin with a compilation of existing literature on the species.”