Can rice husk briquettes stem the tide of mangrove deforestation in Myanmar?

The importance of mangroves in mitigating disaster was emphasized after Cyclone Nargis struck Myanmar in 2008, when communities were shielded by the swamp-like forests. by Wudan Yan on 23 April 2019

IRRAWADDY DELTA, Myanmar — For many in Myanmar, Cyclone Nargis was a wake-up call. When it made landfall in May 2008, it devastated the Irrawaddy Delta, a rural and low-lying region of the country. It became the country’s deadliest natural disaster: more than 100,000 people died, and many more were displaced.

After Nargis, villagers living on the coast were reminded of how mangroves protect them: those located behind mangrove forests remained relatively unscathed. Villages with less protection had greater fatalities.

Mangroves, an ecosystem of strong-rooted trees that grow in swampy, intertidal regions, would serve as an important bulwark in the case of another natural disaster like Nargis.

But over the years, mangrove coverage in Myanmar has plummeted. By the early 1990s, Myanmar had lost up to 75 percent of its original mangrove cover, much of this land converted to aquaculture and rice fields, and the mangrove trees themselves burned as firewood or to make charcoal.

The Myanmar government recognized this rapid rate of deforestation and, in 2016, enacted a nationwide ban on logging. Some locals know that if the mangroves are left alone, they will regenerate in a matter of years.

But there’s an issue of supply and demand: because the majority of coastal villages in the Irrawaddy Delta lack electricity, the demand for firewood — and, by extension, the illegal logging of mangroves — persists. Over the years, people have attempted to make more fuel-efficient stoves, but their distribution in villages is arbitrary at best.

Then came U Zayar Myo, an entrepreneur who, after Nargis, was inspired to create an alternative fuel that could reduce people’s reliance on mangroves.

When the cyclone struck, U Zayar Myo was running his family business, a rice mill located in Kyaiklat, a town in the Irrawaddy Delta approximately 120 kilometers (77 miles) southwest of Yangon, the commercial capital. All of his family members survived, but his business suffered. The machines in his mill were destroyed by the flooding, and some of the farmers he bought rice from were killed.

“It was a stressful time,” U Zayar Myo recalled recently over tea and fruit; he added he had to scramble to get his factory running again and fulfill orders.

But Nargis also got him thinking about how to help conserve mangroves. He believed that producing an alternative to mangrove wood or charcoal could help.

From managing his mill, U Zayar Myo could see how much waste was being generated. The first step in milling rice is to separate the grain from its tough, golden husk. Rice husks are traditionally seen as waste and dumped in a river. And although they’re organic waste, these husks affect water quality, said U Zayar Myo: “Fish would eat it, and it’s indigestible for them, so it shortens their life cycle.”

Waste not, want not

In 2012, U Zayar Myo started toying with the idea of taking the husks and compacting them into briquettes that can be burned in place of firewood or charcoal. Such briquettes have been made commercially elsewhere since the early 1980s. In theory, rice-husk briquettes can burn just as long as charcoal or mangrove wood. So U Zayar Myo bought the necessary equipment from Bangladesh and China that would take the loose husks and compact them into logs under high temperature and pressure.

At his mill, just steps from his home in Kyaiklat, he tinkered with metal parts, scraps and gears to find a way to incorporate the briquette-making process into the husking process. 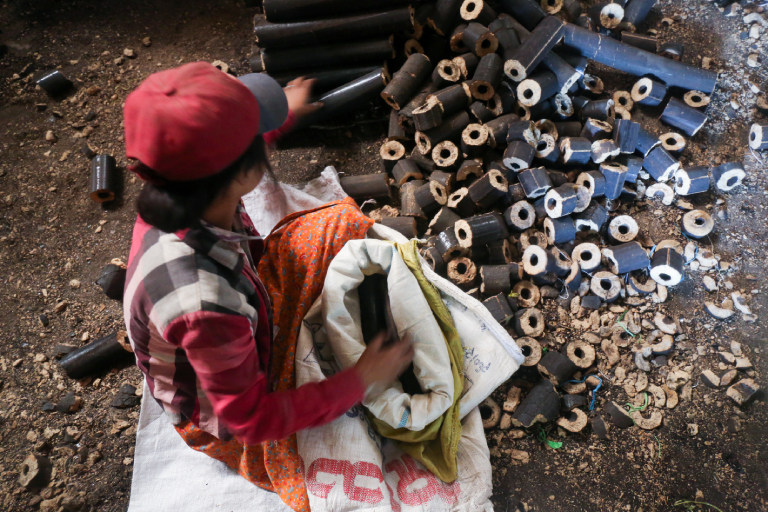 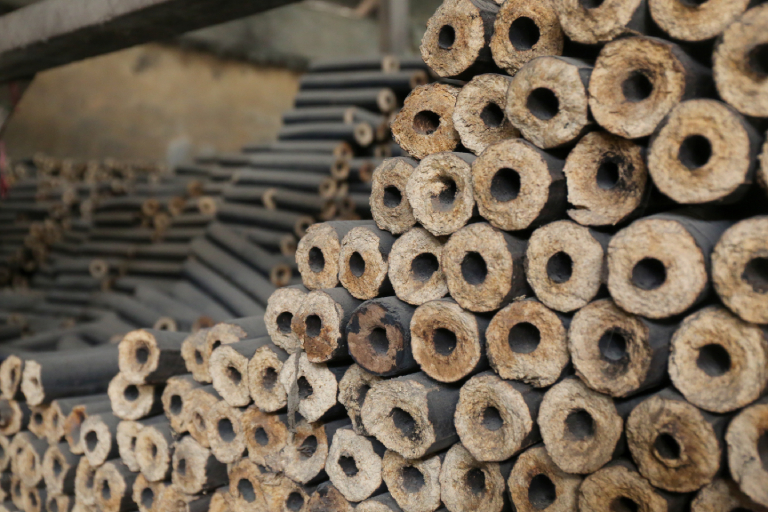 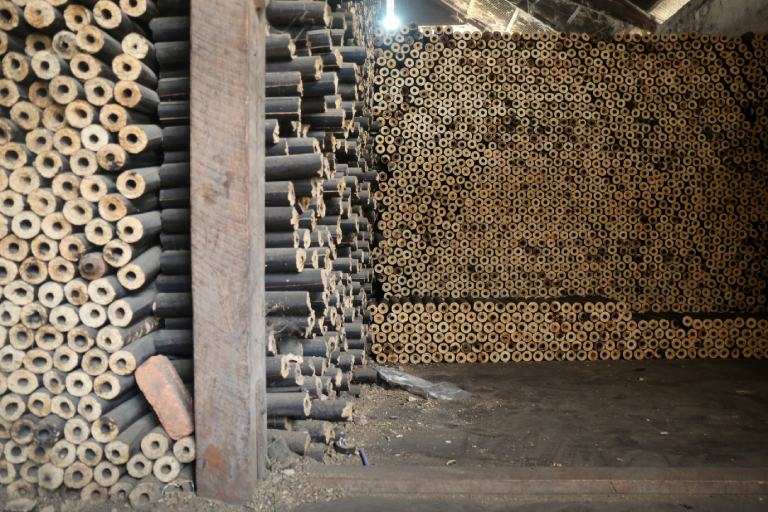 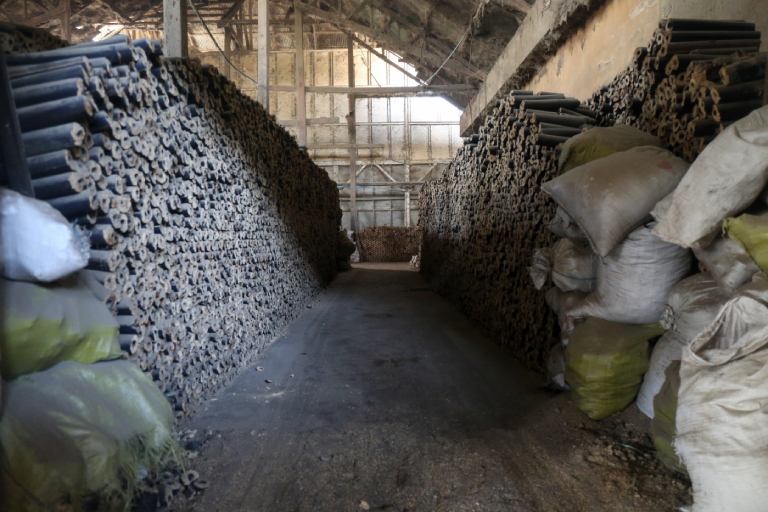 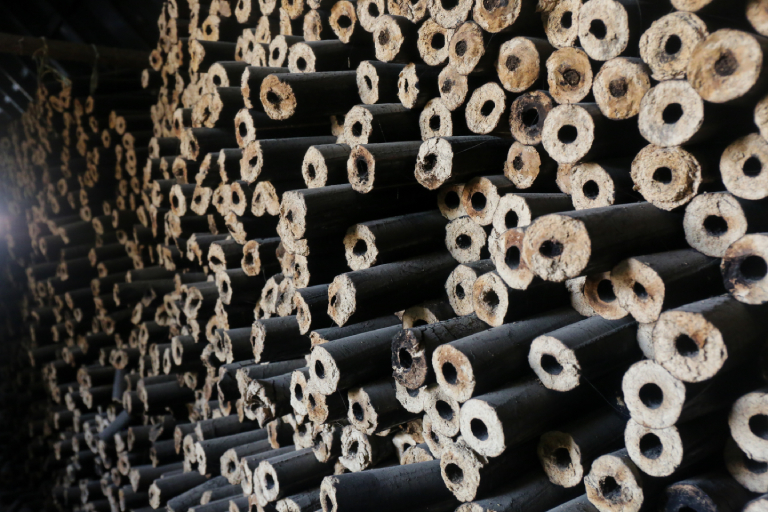 To this day, rusty scrap metal parts sit outside the mill. “These are all my failed experiments,” U Zayar Myo said.

He understood that creating a new product with no immediate market demand was a gamble.

“In Myanmar, people are willing to protect businesses, but are hesitant to start new ones,” he said. At the time, there wasn’t a huge market for the briquettes. “My family told me that I was crazy, because these wouldn’t be profitable.”

But profit wasn’t what drove U Zayar Myo.

Undeterred by criticism from his family, U Zayar Myo pushed forward — a challenging endeavor for the youngest of four siblings. He understood that people didn’t have an alternative to using mangrove wood as firewood. He wanted to price the rice-husk briquettes close to the price of mangrove wood, so that when given the choice, people could opt for the briquettes without having to pay a premium.

It took about two years for his briquette business to ramp up. Even though he has an electric stove, U Zayar Myo started using the briquettes at home to cook and found that they burned just as long as firewood or charcoal.

He then asked some of the workers at his mill to try them out. One of them used to take one day off every week to collect firewood for his family. But after being given the briquettes, he took only one day off a month. U Zayar Myo also brought briquettes with him when he visited rice suppliers in other villages in the Irrawaddy Delta, hoping to spread the word.

In 2014, he began approaching oil refineries in Myanmar, an industry historically reliant on firewood, and was able to get them to switch over to using rice-husk briquettes.

He now plans to sell the fuel to brick-making outfits, which bake bricks made from mud in kilns, for use by construction companies. Brick kilns have traditionally used mangrove wood in the final stage of firing, but U Zayar Myo said he hoped the briquettes could serve as an appropriate alternative fuel.

Fishermen working on offshore fishing rafts in Myanmar also use mangrove wood to boil freshly caught fish and shrimp. U Win Tun, the owner of a fishing business, said he learned about rice-husk briquettes from Facebook more than a year ago. Since then, he’s switched to using the briquettes: “It’s cheap, and good for keeping the mangrove forests — which are in need of urgent conservation — intact.”

U Zayar Myo’s method for making the briquettes is slowly spreading to other rice mills in the Irrawaddy Delta. When Mongabay interviewed him in January, some 15 other rice mills were using his technique.

Ko Htet Min Thu, the owner of one such mill in Labutta, a town in the Irrawaddy Delta 250 kilometers (155 miles) southwest of Kyaiklat, described the rice husks left behind in his mill as a problem. He said he was eager to find a way to take what was considered junk and make it into an alternative fuel. “Rice-husk briquettes could save the mangrove forests,” he said. He’s now trying to spread the word in Labutta about using rice-husk briquettes. As of January, about 80 percent of people living in Labutta used the briquettes, he said.

Although they’ve been adopted by different businesses that are traditionally reliant on burning mangrove wood, the briquettes have been slower to catch on in the more remote villages of the Irrawaddy Delta that lack electricity and alternative sources of fuel, and where villagers continue to illegally harvest mangroves.

Last May, U Zayar Myo received an award from the Myanmar Department of Small and Medium Enterprises for his innovation. He also showed the rice-husk briquettes to the country’s state counsellor, Aung San Suu Kyi, at a meeting in Myanmar’s capital, Naypyitaw.

“She asked me whether it was profitable,” he said. Although his marging per pound of briquettes is less than half a U.S. cent, he answered in the affirmative. “[Aung San Suu Kyi] told me, ‘OK, good. Keep going.’”

Compared to running a rice mill and exporting the grain, “manufacturing rice-husk briquettes is low profit,” U Zayar Myo said. “But I don’t see anyone else trying to come up with alternative fuels.”

With additional reporting by Victoria Milko.

FEEDBACK: Use this form to send a message to the editor of this article. If you want to post a public comment, you can do that at the bottom of the page.