As I described in the origin story post, Mongabay had a very modest beginning. I never had any intention of making a living, let alone a career, out of running the website.

After quitting my day job to pursue my passion at 25, I dedicated myself completely to building Mongabay and tracking tropical rainforest issues. It wasn’t easy: the revenue from advertising was pretty marginal those first few years, especially when factoring in the 100-plus hours a week I was putting into the effort, plus travel and equipment costs. But I loved what I was doing — when asked what I would do on a day off, I’d say “Exactly what I’m doing when I’m working.”

Once I started doing Mongabay full-time, I focused on creating more content for the site. One of the first things I did was write a section about rainforests for children, illustrated with the growing collection of photos I was taking. As part of my effort to reach as many people as possible, I found native speakers to translate the text into nearly 40 languages.

Less than a year after leaving my “real job,” I created the news section of Mongabay to address what I saw was a gap between mainstream media’s inattention to conservation issues and advocacy-oriented communications from NGOs. Most of the focus was on rainforests, but I did occasionally cover climate and energy, travel, and green design, especially biomimicry. My articles seemed to resonate with audiences; Mongabay’s traffic grew steadily.

The great thing about running Mongabay in those days was I could work from anywhere. And no one expected me to do daily reporting, so I go could go out to the field for extended periods of time to take photos, conduct research and interviews, and hang out with incredible conservationists and front-line environmental defenders.

When I wasn’t traveling, I maintained a pretty intense work schedule, albeit one that lacked the formality of my previous career at a Silicon Valley startup. I was glad to say goodbye to that world.

As Mongabay’s audience grew, so did its reputation. The surprising thing was that many people seemed to think Mongabay was a much bigger entity than a guy sitting in his apartment typing away on his computer in his pajamas. Amid the massive volume of email, I received requests for jobs, money, equipment and reporting partnerships on a regular basis.

But the reality was still that I was just a pajama-clad guy in his apartment. I lived simply and managed expenses carefully so I could keep this thing going.

Within a year of launching the news service, I was producing close to 1,000 stories a year by myself, but I started to get some help. My first outside writer was my sister. She was stuck in a dead-end job with a desire to work on sustainability issues; I told her that if she quit her job, I’d pay her a salary until she found something that was a better fit with her passion. She excelled in the role, publishing several stories that garnered a lot of attention on critical issues like cattle ranching in the Amazon, the collapse of Borneo’s dipterocarp cycle, and endangered wildlife. Mongabay wasn’t exactly flush with cash, but I was able to make it work.

In 2007, with my sister having moved on to greener pastures, I landed my first non-familial contributor: a graduate student named Jeremy Hance. Jeremy reached out to me with a heart-felt commentary on the extinction of the baiji, also known as the Yangtze river dolphin (Lipotes vexillifer). He felt the species’ demise did not get enough attention from Western journalists. He became Mongabay’s first intern.

Jeremy began writing occasional pieces for the site. By 2008, he was writing regularly enough that I felt guilty that he was doing this as a volunteer, so I invited him to attend the Association for Tropical Biology and Conservation conference in Suriname. He accepted my offer and brought along his wife, Tiffany Roufs. We met in person for the first time in a hotel lobby in Paramaribo, Suriname’s capital.

In Suriname, Jeremy asked if there might be a job for him after he finished grad school at the end of the year. By then, Mongabay had reached a point where I was able to pay myself a salary equivalent to my previous “real job” and the trajectory looked good, so I made him an offer. I had no idea that the financial crisis lurking just around the corner meant that 2008 was Mongabay’s peak revenue year.

A few months before Jeremy was to join Mongabay as its first employee, the marketing for green advertising collapsed along with the stock market and global financial system. But I didn’t want to renege on my commitment, especially given the difficult job market, so I stopped drawing a salary and instead lived off savings for about a year and a half.

Having Jeremy on board was a big boost to Mongabay. It greatly increased our ability to cover important conservation stories and also meant that the site didn’t go into a standstill when I was in the field. Jeremy was a strong and thoughtful writer who produced fine content. Several of his stories had major on-the-ground impacts, including his series about a plan to log Woodlark Island off Papua New Guinea, and a proposed coal plant in Sabah, Malaysia.

In the early years of Mongabay, I was commonly asked how I raised startup funding for Mongabay. A lot of people seemed to assume that I was either a trust fund baby or a dotcom millionaire, but the reality is less exotic — I invested time, rather than cash, into the project.

I started developing the content that would eventually become the basis of Mongabay well before I even knew the internet existed. First was a reference book about tropical freshwater fish. Then came a manuscript about rainforests, which directly led me to establish a website. Before I even wrote my first line of HTML code, I had already invested more than 6,000 hours into the project. By the time I put ads on the site in mid-2003, that number had grown to more than 15,000 hours. No matter how you value the time of a person in their teens and early twenties, that is a substantial investment. At $10 an hour, it’s $150,000; at $20, it’s $300,000. That time was my startup capital.

I had the benefit of having paid work during this time. In high school, I worked in retail. In college, I worked in consulting and finance. After graduating from college, I worked at a Silicon Valley tech startup. In each case, I devoted as much time as possible to my passion. For example, at the startup, that meant 45 to 50 hours a week in the office and 50 or more hours on nights and weekends focusing on Mongabay. The hard work paid off: I was able to build up the site to the extent that once I did decide to monetize the site via advertising, within six months the revenue coming in was equivalent to nearly half my “real job” salary. At that point I decided to leave the comfort of a steady income and pursue my passion full-time. I have never looked back since.

That said, while Mongabay’s traffic and influence continued to rise in the years after the financial crisis, revenue was flat. That made it difficult to pursue the many ideas I had that wouldn’t be viable with an advertising-based business model, like, for example, an Indonesian-language environmental news service.

At the beginning of the 2010s, it appeared Indonesia was potentially nearing an inflection point in terms of its development strategy, where it could shift from a business-as-usual approach based on forest destruction to a model more like what Brazil had achieved a few years earlier, where deforestation was effectively disaggregated from national economic growth. In Indonesia, corruption around natural resources is a major issue, but one where journalism might be able to make a difference by increasing transparency and accountability. On that premise, in mid-2011 Mongabay began shopping the idea of establishing an Indonesian-language environmental news service run by Indonesians for Indonesians.

But first, I needed a business model. A lot of people already thought Mongabay was a nonprofit, so I decided to pursue that path, establishing the not-for-profit Mongbay.org Corporation. Once that was done, I submitted a proposal to the Ford Foundation in Indonesia and secured a two-year, $150,000 grant to establish Mongabay Indonesia. The day the grant was approved, I drafted three job descriptions, which I had translated into Indonesian, and then sent out to my network.

Resumes began pouring into my inbox. Within a week I had nearly 200, so I booked a trip to Indonesia and set up interviews with the top 40 candidates. After three long days of interviews with those applicants, I went to Ujung Kulong National Park, the last refuge for the Javan rhino (Rhinoceros sondaicus). During the day I went out with a rhino patrol unit, while at night I went through the notes from the interviews. By the time I was back in Jakarta a few days later, I had my final list and hired four Java-based staff in March 2012. Within a month, mongabay.co.id was live, and by June it was already one of the most popular environmental sites in Indonesia.

Mongabay Indonesia’s traffic grew rapidly: it received its millionth visitor in March 2014; hit the 5 million mark by September 2015, and 30 million in 2018. But even more surprising was how quickly the site was recognized by its media peers, civil society and authorities. By the end of 2012, Mongabay Indonesia journalists were regularly being invited to attend high-level press events and meetings with Indonesia’s largest newspapers, TV outlets, and magazines. By 2014, we were getting word that the president of Indonesia and his cabinet were reading articles on the site. More importantly, Mongabay Indonesia has had real impacts on the ground, exposing corruption and abuse, documenting successful conservation initiatives, and raising awareness on a massive scale.

We learned a lot from Mongabay Indonesia. In 2012, the social media market in Indonesia was more developed than in the United States or Europe, giving us important insight on marketing, outreach and user behavior on those platforms. Mongabay Indonesia was also an opportunity for experimentation. For example, Indonesia was where we first built a network of local correspondents. Until then, Mongabay’s content was only written by our two staff writers. That experience prompted us to hire editors and start engaging with journalists around the world.

With its proven track record, Mongabay Indonesia became the model for future bureaus, including Mongabay Latam for Spanish-speaking Latin America, which launched in 2016, and Mongabay India, which started in 2018. Its success helped us find resources for these other bureaus as well as special reporting projects — deep series on specific topics and geographies. 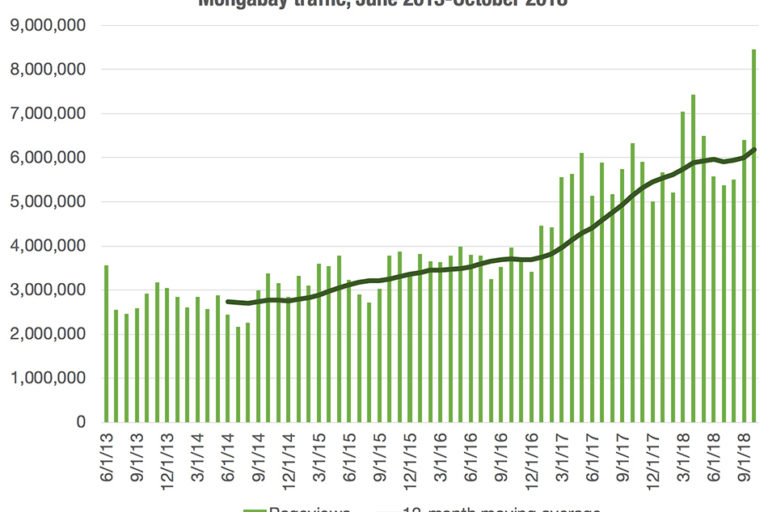 To gauge the effectiveness of various initiatives in Indonesia and beyond, we developed systems for tracking impact, including quantitative data like numbers of stories produced, readership, social media activity and republication by other outlets, as well as qualitative data like on-the-ground responses to our reporting. We developed our own tools and leveraged our reporting network to gather and evaluate this data, which we’d then use to modify our strategies and inform our supporters. We found that donors especially appreciated the information we were able to provide them on impact. This approach allowed us to build on our success and continue expanding the organization.

Today Mongabay has nearly 50 staff and some 350 correspondents in more than 50 countries. In 2018, we broke 100 million views across our website and videos for the first time. And our annual budget has increased 40-fold since 2012. In short, the organization has come a long way since I started it in my apartment after graduating college.