A carbon bomb in Papua: 7 takeaways from our investigation

by The Gecko Project and Mongabay on 4 December 2018

Last week, The Gecko Project, Mongabay, Tempo and Malaysiakini published an investigation into the story behind the Tanah Merah project, a giant oil palm plantation under development in Papua, Indonesia.

The article is long, so here are seven key takeaways from it, including a brief analysis of what could happen next:

1. The project poses a greater threat to Indonesia’s forests than any other

The project spans 2,800 square kilometers (1,080 square miles), nearly twice the size of greater London. It sits at the heart of the largest tract of virgin forest remaining in Asia. To date, only around 2 percent of the area has been cleared. If the project is completed, it will produce as much greenhouse gas emissions as Virgina does by burning fossil fuels in a single year. 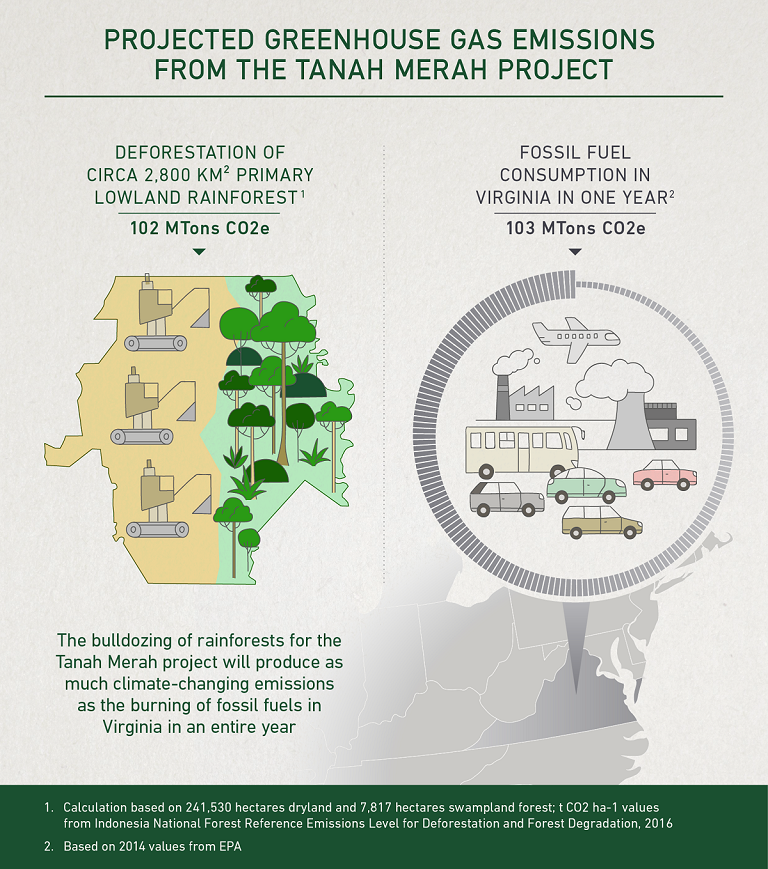 2. The ownership of the project is shrouded in secrecy

The investors behind the project have employed all the tools of corporate secrecy to hide their identities: shell companies with front addresses, fake and proxy shareholders, and offshore secrecy jurisdictions. Today the main shareholders in the companies remain obscured.

3. Permits for the project were issued from a prison cell

The politician who headed the district at the time of the project’s inception was arrested on unrelated corruption charges at a critical stage of the permit process. We discovered he had signed key documents relating to the project from his prison cell on the island of Java.

4. Key permits have been hidden from public scrutiny, in suspect circumstances

Chairul Anhar, the businessman who was central to the Tanah Merah project, also tried to develop a series of vast sugar plantations on a remote string of islands elsewhere in Indonesia. That project was cancelled after illegalities in the permit process were exposed. It has proved impossible to establish whether the same kinds of breaches occurred with the Tanah Merah project, because the necessary documents — the environmental impact assessments (EIAs) — have proved stubbornly elusive. Even local and provincial government agencies with a role in the process claim not to have seen the EIAs. Sources expressed the view that the EIAs are being deliberately, and illegally, withheld from the public.

5. The project involves one of the world’s most notorious tropical logging firms

The Malaysian logging firm Shin Yang is a major shareholder in the sawmill under construction. Shin Yang has been at the centre of repeated environmental and human rights scandals in Malaysian Borneo.

6. The project falls on the land of indigenous people, whose rights have been roundly ignored

The rainforest slated for destruction falls on the ancestral lands of the indigenous Auyu people. The Auyu are heavily dependent on the rainforest for their livelihoods. Villagers living under the shadow of the project say they were pressured to sign documents relating to the project that they did not understand. They told us they were prevented from voicing their opposition to the project due to the oppressive presence of police and soldiers. They told of how one man was “beaten half to death” by a police officer at a meeting held to discuss the project. None of the benefits that were promised to them have materialized.

7. The project is a test case for whether Indonesia will be able to halt deforestation, with global implications

Large-scale palm plantations have been one of the biggest drivers of deforestation in Indonesia over the last decade. Deforestation, in turn, has been a leading cause of greenhouse gas emissions in Indonesia. Recognizing this, earlier this year Indonesian President Joko Widodo announced a freeze on new permits. But the moratorium won’t halt the destruction, because there are many millions of hectares of forest still earmarked for clearance under existing palm permits — those underpinning the Tanah Merah project being the largest example.

However, the president’s order also mandated a review of all existing licenses. Vast tracts of forest could still be saved if cause was found to revoke them. A similar program has resulted in the revocation of thousands of mining permits, and a meaningful review of existing palm permits is essential if Indonesia is to meet its international climate commitments and halt forest loss. Given the globally significant volume of greenhouse gas emissions from deforestation in Indonesia, the implications extend far beyond the country’s borders.

Correction (Jan. 11, 2021): This article originally stated that the Malaysian logging firm Rimbunan Hijau was involved in the project through a minor stake in one of the plantation companies holding land in Boven Digoel. The minor shareholder is a company named PT Rimbunan Hijau Plantations Indonesia. However, there is no evidence that the Malaysian logging conglomerate of the same name is connected to it.