Women of childbearing age from small-island states and countries have been found to have toxic levels of mercury, a potent neurotoxin that can harm unborn children, a new report shows.

The study took hair samples from 757 women between the ages of 18 and 44 years from across the Pacific, the Caribbean and the Indian Ocean. Nearly 60 percent of them were found to have mercury levels of more than one part per million, or 1 ppm — the threshold above which brain damage, IQ loss, and kidney and cardiovascular damage can occur, according to the U.S. Environmental Protection Agency (EPA).

The mercury level associated with the onset of fetal neurological damage is lower, at 0.58 ppm, and the number of women whose hair samples exceeded that level for mercury was 75 percent, the study found.

The study, published Nov. 19, was carried out by scientists from the nonprofit Biodiversity Research Institute (BRI) and IPEN, a global coalition of health and environmental groups.

They took hair samples from women in 21 countries and territories — including Fiji, Barbados, Comoros, Sri Lanka, and the U.S. islands of Molokai in Hawaii and Saint Lawrence in Alaska — where industrialization remains low and the population relies on local fisheries as a major source of dietary protein.

“The highest level found in the sampling that can be confirmed was over 20 ppm,” Lee Bell, IPEN’s mercury policy adviser and lead author of the report, told Mongabay in an email.

The report attributed mercury pollution in these areas to distant air emissions of the toxic heavy metal from sources such as coal-fired power plants and other industries, as well as air emissions from mercury use in small-scale gold mining, eventually contaminating the ocean fish. Waste incinerators and cement kilns are also big sources of mercury pollution, Bell said.

“This study presents stark evidence that mercury pollution poses an immediate threat to a significant portion of the world’s population,” Pam Miller, IPEN co-chair, said in a press statement that noted that more than 66 million people live on small islands.

“They are facing a double-edged crisis from coal-based energy,” Miller said. “Their homes are threatened with flooding as climate change causes sea levels to rise, while their food supply is increasingly contaminated with mercury from coal burning emissions.”

Mercy Ritte, the coordinator of the Molokai hair sampling, described the findings as “devastating,” particularly after learning that her community’s traditional island diet posed the risk of infant brain damage and reduced childhood development.

“I was pregnant during the study, as were a number of other women in my community,” Ritte said as quoted in the statement. “It is unfair that we are suffering here on our tiny little island because governments far away are not ending toxic coal energy, when we all could be using renewable resources.”

On top of health and environment impacts from mercury pollution, the report also estimated a total of $77.4 million in lost economic productivity assuming a 1 ppm reference level, and $130 million if no reference was used.

The researchers called for a complete ban on the trade and use of mercury, and for phasing out coal-fired power for renewable energy across the world to resolve the global mercury pollution.

“As long as there is a mercury trade, it will get into the hands of small scale gold miners and be released into the environment either legally or illegally,” Bell told Mongabay. “There are many substitutes for all mercury uses and no need to use it any longer in any industrial process or product. It is no longer a necessary commodity.”

A global framework agreement on the issue, the Minamata Convention on Mercury, came into force in August 2017. Countries that ratified the convention are expected to apply best environmental practices to cut back on the use of mercury. But the convention has been criticized by environmental activists, who say its restrictions apply only to new coal-fired power plants and can only be legally enforced five years after the treaty enters into effect for each ratifying party.

Green groups have also taken issue with the convention’s lack of provisions to limit the number of new coal-fired facilities that countries can build, and questioned the effectiveness of the convention’s concept of “best environmental practices” for these facilities.

IPEN and BRI published a report last year showing that 86 percent of the 1,000 women of childbearing age they surveyed in 25 countries around the world had mercury levels above the 1 ppm safety limit, with most over three times that.

“We are not optimistic under current arrangements. At the moment things are getting worse,” Bell said.

He cited a recent report from United Nations Environment Programme that showed mercury pollution in the atmosphere had surged by 20 percent in the five years between 2010 and 2015 due to an increase in artisanal and small-scale gold mining and the operations of more than 3,000 coal-fired power stations.

“If the Minamata Convention and instruments such as the Paris Agreement can’t deliver immediate action to end the global trade in mercury and replace coal-fired power with renewable energy, then politicians should seize the moment and issue unilateral bans on mercury imports and exports and declare an end to coal fired power,” Bell said.

“No amount of gold or coal is worth the poisoning of the ocean and the damage it will cause to women and their children,” he said. 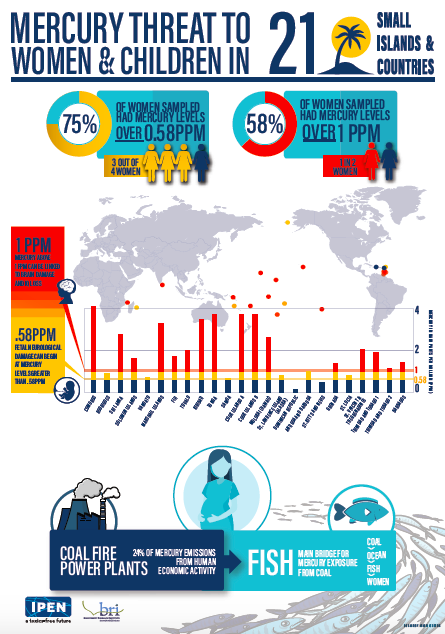