Catalyzing action on sea litter in Brazil and beyond

The impact of plastic on the world’s oceans has been garnering a lot of attention of late, with consumer products companies, governments, and restaurants chains making high profile commitments ranging from phasing out single-use straws to rethinking their packaging. In Brazil, a key catalyst for raising awareness on the issue of sea litter has been Menos 1 Lixo, an educational platform that runs online campaigns and organizes beach clean-ups to spur behavior change.

Menos 1 Lixo was founded by Fe Cortez, a Brazilian TV presenter, social media expert, and environmental activist. Cortez was moved to action after seeing Trashed, a documentary by Jeremy Irons. The UN Environment Programme appointed her champion of the Clean Seas campaign in 2017.

Cortez (@fecortez on Instagram) spoke with Mongabay about her efforts ahead of her appearance at the Global Landscape Forum in Bonn, Germany, where she is participating in the Youth Plenary: Creating our Shared Future, which is taking place Saturday, December 1 from 11:45-12:30.

An interview with Fe Cortez

It seems like there is growing momentum on this issue globally, with some recent high profile commitments from governments and companies to change practices. Are you seeing the same in Brazil?

Mongabay: What is your background and how did you become inspired to start Menos 1 Lixo?

Fe Cortez: I graduated in fashion design and worked in the fashion industry for more than 10 years, and then I owned a small social media agency. In 2012 I watched Trashed, the documentary by Jeremy Irons, where he shows how we are turning mother Earth into a huge can of trash and it was devastating to see that I was part of that. When I left the movie, I bought a retractable cup and 20 more to give to my friends. It turned out that by using this device, people became aware that they create trash, something that we don’t quite notice in our daily lives, because there is always someone handling our waste.

I started to study sustainability a lot and in 2015 I launched “One Less Trash”, a positive impact business created to educate people on environmental issues in a cool, sexy and light language. I wanted to use the tools that I used to sell fashion and other stuff, to “sell” a behavior change.

Mongabay: What is Menos 1 Lixo’s approach to educating the public on sea litter?

Fe Cortez: We act in different ways. Our symbol, the retractable cup, is a device that reminds people of how much plastic disposables they use in their daily lives, and the use of the cup, bu itself, is an educational tool. Also we use our channels in instagram, facebook and youtube to educate and inspire people to change behavior, with content in a cool language, and easy for everyone to understand.

Since last year I was announced UN Environment Defender for the “Clean Seas” program. And together with UN, we launched a web series of 10 episodes, in Portuguese and English, to explain the situation to people, to show what the picture is and we can do to change the sea litter situation. If we don’t change our consumption habits, in 2050 there will be more plastic than fish in the ocean.

We also work together with industries to try to create alternatives to disposables, and to change mindsets.

We also promote some clean ups at the beach along with brands that want to promote this awareness.

Mongabay: What messaging do you find resonates most with people on this issue?

Fe Cortez: The animals. We are all living beings and people have a very impressive connection with sea animals like whales, turtles and dolphins. The fact that we are now killing hundreds of thousands of animals due to our litter hurts people, and make them rethink their habits, like using straws, plastic cups, and plastic bags. 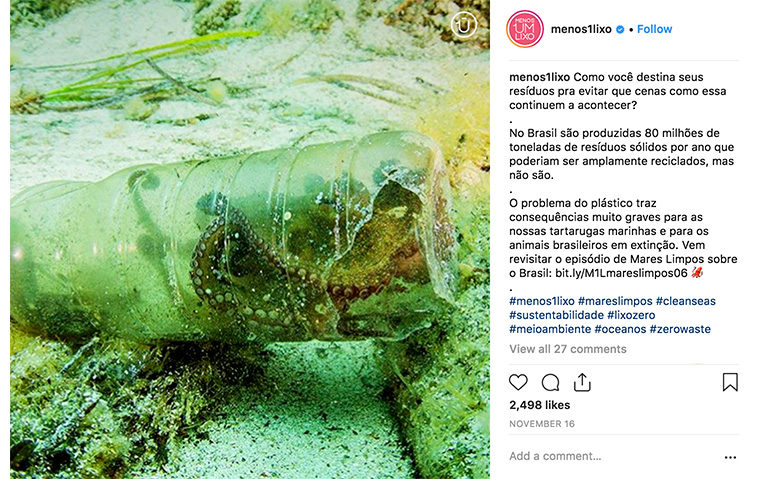 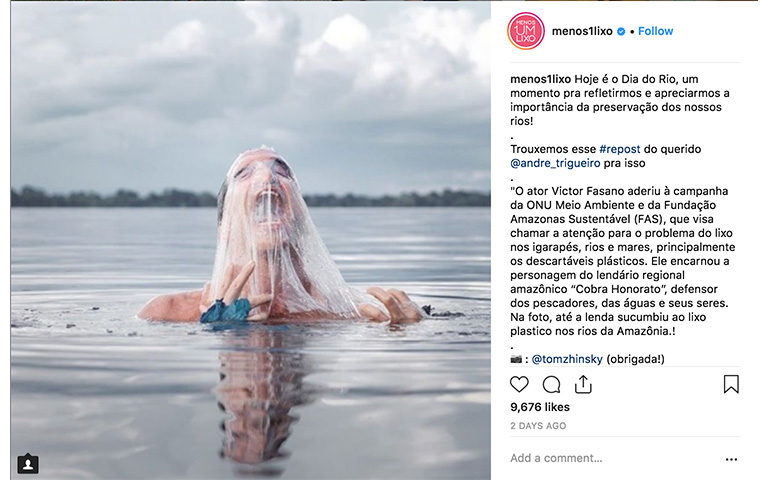 Mongabay: What has been your biggest success to date?

Fe Cortez: My biggest success is to see that people really change habits by using Menos 1 Lixos’ cups. They start with a cup and then it expands to other parts of their lives, and to influencing other people in this positive change. Also to see that we have now more than 200K followers on instagram and that our educational content engages that much people. It is a daily victory!