To stay under 2 degrees Celsius of warming and thereby stave off the worst effects of climate change, more funding must be allocated to forest-focused global warming mitigation strategies. That’s the takeaway from a new analysis by Global Forest Watch (GFW) this month. The numbers suggest that forests, harnessed effectively, could be a powerful climate mitigation tool, but “forests have long been overlooked as a climate change solution,” said Nancy Harris, Research Manager for GFW.

One consequence of this oversight, according to climate scientists, is that the contributions of deforestation and forest degradation to climate change have received less attention than fossil fuel emissions. Tree cover loss contributes to global carbon emissions because trees naturally capture and sequester atmospheric carbon as they grow. When the trees are consumed by forest fires or cleared and burned to make way for pastureland, carbon that took decades to store is released back into the atmosphere near-instantaneously.

According to analysis by Global Forest Watch, tropical forest loss currently accounts for 8 percent of the world’s annual carbon dioxide emissions. In other words, if tropical deforestation were regarded as a country, it would be the third-biggest emitter globally – ranking just below the U.S and significantly above the EU. And, according to GFW, forest-related emissions have gone up, not down, since the Paris Agreement. Between 2015 and 2017, forest-related emissions were 63 percent higher than the average for the previous 14 years, rising from 3 billion to 4.9 billion metric tons per year. 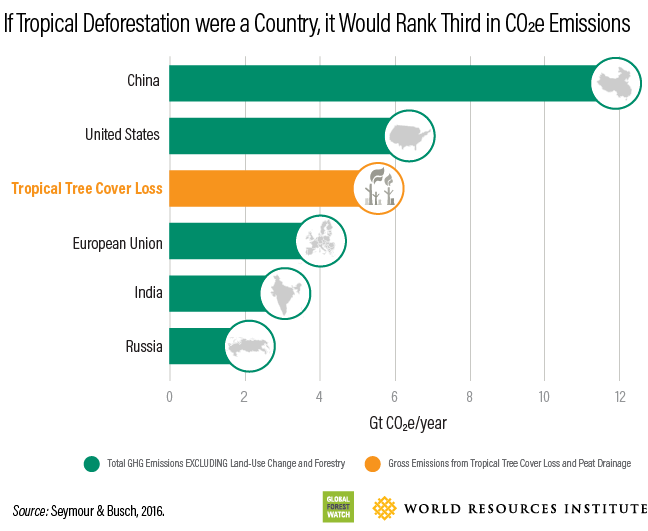 This increase can be traced to three main factors, Harris said. A growing global middle class means more demand for commodity crops like beef, soy, and palm oil, and a population boom in Sub-Saharan Africa means more land is being cleared for subsistence agriculture. In addition to these agricultural demands, fires and hurricanes are becoming more intense and destructive due to climate change.

However, Harris and her colleagues write that if we focused efforts on the management, protection, and restoration of forests — building them up instead of cutting them down — forests could be transformed from emissions contributors into a climate solution. Forests have a naturally higher potential for carbon mitigation due to the double benefit of avoiding the release of carbon dioxide and capturing atmospheric carbon as restored forests grow.

So while, under current trends, tropical forests are currently contributing 8 percent of the problem every year, Global Forest Watch estimates that they could potentially provide 23 percent of the climate change mitigation needed to keep warming under 2 degrees by 2030. Tropical forests have the potential to mitigate about 7.1 billion metric tons of carbon dioxide annually, more than the total carbon dioxide-equivalent emissions of the U.S. in 2014.

“To achieve a balance between anthropogenic emissions and removals in the second half of this century, carbon removal strategies must be developed, and forests are very effective at pulling carbon out of the atmosphere,” Harris said.

“In deforested areas, local temperatures rise, and deforestation-driven disruptions to the water cycle can threaten agriculture both locally and half a world away,” Harris said.

However, despite the ability of forests to help  hedge against climate change on both local and global scales, less than 3 percent of climate mitigation funding is directed towards forests. Harris attributed the precedent for inadequate attention to forests and land use to the Kyoto Protocol.

The Kyoto Protocol, which went into effect in 2005, is an international treaty committing countries to reducing their greenhouse gas emissions. The problem, explained Harris, is that it only required developed countries to set legally binding targets.

Since the emissions of developed countries are largely attributed to fossil fuels, and because these countries also tend to be located in regions that do not contain tropical forests, this has had the unintended effect of obscuring forests both as a problem and a solution, Harris said. In addition, forest-related emissions were more difficult to monitor before satellite imagery became available.

Now, with enhanced monitoring techniques, it is easier than ever to track tropical forest cover loss and its associated carbon emissions. And while most countries are behind on shifting climate mitigation funding accordingly, there is at least one country setting a good example.

“Through reduced deforestation, Brazil has already achieved greater emission reductions than all the Kyoto commitments combined,” Harris said. “Public policy initiatives, law enforcement, timely and operational forest monitoring, and voluntary actions by the private sector are all factors in this success.

But with Brazil in the midst of a tight presidential election, conservationists are worried the country may soon loosen environmental regulations and open forests to development.

“While climate mitigation funds towards reducing deforestation are necessary, there must also be political will to act,” Harris said.

Disclaimer: Mongabay has a funding partnership with World Resources Institute (WRI), which administers Global Forest Watch. However, WRI has no editorial influence over Mongabay content.