A new species of orangutan from Indonesia (analysis)

Researchers from Indonesia and several other countries today (including authors of this piece) published in the journal Current Biology one of the most exciting new species descriptions in this century – a new species of orangutan from Sumatra. Although we have seen the discovery and description of 88 species of primates new to science since 2000, this new orangutan is the first full species of great ape since the Bonobo from the Democratic Republic of Congo in 1929. The new species, named the Tapanuli orangutan (Pongo tapanuliensis) is found in the Tapanuli region of North Sumatra Province and is named after the region in which is occurs.

As one of the two most megadiverse countries in the world (together with Brazil), Indonesia already has a remarkably rich fauna and flora, including such globally renowned flagship species as the Sumatran and Javan rhinos, the Sumatran tiger, the Asian elephant, the babirusa, the anoa, the Komodo dragon, and many species of bird-of-paradise. Its primate fauna is truly exceptional. Indeed, with the new orangutan, it now has 61 species and 79 taxa of primates, numbers that are exceeded only by Brazil and Madagascar (see table), and fully 59 of these (75%) are endemic. Sumatra alone is home to 18 species and 19 taxa, of 11 of which are endemic and found nowhere else.

With this new great ape, Indonesia’s 79 taxa rank it among the top two countries on Earth for great ape diversity along with the Democratic Republic of Congo. Indonesia now has three species and five taxa of great apes, whereas the DRC has four species and six taxa.

7 species and 7 taxa of slow lorises.

10 species and 13 taxa of tarsiers (Cephalopachus and Tarsius. All Tarsius (11 species) are endemic to Sulawesi

32 species and 44 taxa of monkeys – Cercopitheciidae

9 species and 9 taxa of gibbons (Hylobates and Symphalangus). 5 of the endemic (Hylobatidae)

3 species and 5 taxa of orangutans (with Tapanuli) 3 of them endemic.

An international team of scientists described the species in a paper published today, November 2. The researchers demonstrate that the Tapanuli orangutan is genetically and morphologically distinct from the Sumatran orangutan, and is therefore a separate species. According to the paper, the Tapanuli orangutan is in fact more closely related to the Bornean orangutan than it is to the Sumatran orangutans that live to its north, north of Lake Toba. The three orangutans—Bornean, Sumatran and Tapanuli—evolved from a common ancestor about 3.4 million years ago.

Unfortunately, as is so often the case with new species discoveries, the Tapanuli orangutan is in trouble, and has provisionally been classified as Critically Endangered by experts from the Section on Great Apes of the IUCN/SSC Primate Specialist Group. The animal lives only in a few forest patches in the Central, North and South districts of Tapanuli in the province of North Sumatra, in an area called the Batang Toru Ecosystem, south of Lake Toba. Forest loss data indicates that key orangutan forest habitat in Sumatra was reduced by 60 percent between 1985 and 2007, which, in addition to illegal hunting, has led to a significant population reduction of orangutans in recent years. Today the severely diminished population of the Tapanuli orangutans extends over only about 1,000 square kilometers and the total remaining population is estimated at less than 800 individuals. Logging, mining concessions, agricultural plantations and a proposed hydroelectric dam all continue to threaten its survival.

This discovery also shows that despite almost 50 years of orangutan research on Sumatra, there is still so much to learn about these apes and that maintaining them throughout their entire distribution is crucial to maintaining the diversity of orangutans across their range. Indeed, “Most in the conservation community would agree that birds and mammals are among the best studied taxonomic groups, and, among mammals, primates stand out. The fact that a new species of great ape has been discovered underscores the challenge ahead for increasing our knowledge of all species, especially those less known, and tailoring our conservation efforts to the actions that are most likely to have a positive impact,” highlighted Jon Paul Rodríguez, Chair of the IUCN Species Survival Commission. 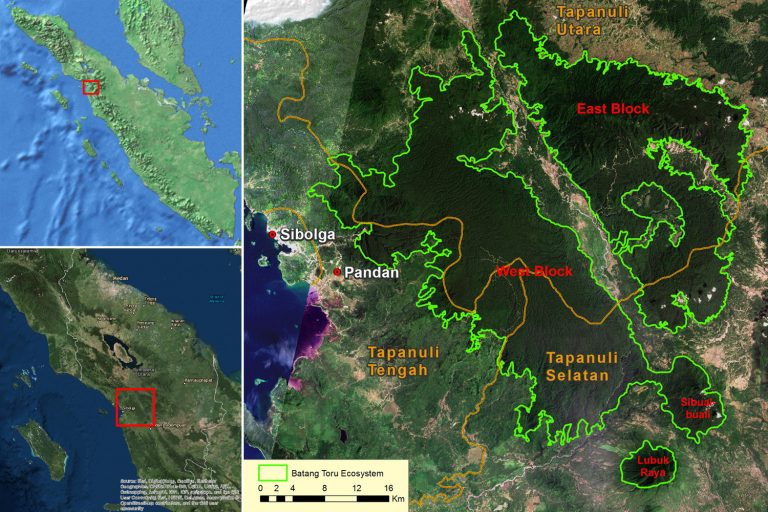 Russell A. Mittermeier is Chair, IUCN/SSC Primate Specialist Group and incoming Chief Conservation Officer of Global Wildlife Conservation; he served as Conservation International’s President from 1989 to 2014, and has been that organization’s Executive Vice-Chair since 2014.

Serge Wich is Co-Vice Chair of the Section on Great Apes of the IUCN/SSC Primate Specialist Group, Professor of Primate Biology at Liverpool John Moores University; and an Honorary Professor for the Conservation of Great Apes at the University of Amsterdam. He is also a coauthor of the paper describing the new orangutan species.

Gabriella Fredriksson is Programme Coordinator for the PanEco/Sumatran orangutan Conservation Programme in Tapanuli, which has focused on protection of the Batang Toru Ecosystem since 2005. She is also a coauthor of the paper describing the new orangutan species.

Anthony B. Rylands is a Deputy-Chair of the IUCN/SSC Primate Specialist and incoming Primate Conservation Program Director at Global Wildlife Conservation; he has been a Senior Research Scientist at Conservation International for 17 years.