A roar for nature in Indonesia: Q&A with the poet behind ‘Indigenous Species’

Two decades after the catastrophic Indonesian wildfires of 1998-9, writer and artist Khairani Barokka revisits her feelings about the disaster in a book-length poem that highlights environmental degradation and indigenous rights violations.

Barokka wrote “Indigenous Species” in 2013 for a performance at the Melbourne Emerging Writers’ Festival, and published it last December through Tilted Axis, a nonprofit press based in London.

As an adolescent, Barokka witnessed her parents, an urban planner and an ecologist, try to deal with the fallout from the fires. Though no longer as severe, the burning still occurs every year across Sumatra, Borneo and other Indonesian regions, the result of large-scale peatland drainage and slash-and-burn practices. In 2015, smoke from the fires sickened half a million people.

The poem tells of the narrator’s abduction aboard a boat on an Indonesian river. The voice is mostly that of a young girl, but the rich cultural imagery at times transforms her into a captured animal. She expresses fury at her abductors, themselves depicted in a variety of forms, from capitalist imperialists to environmental exploiters and colonialists.

As a consumer, the narrator regrets colluding with these forces. Her tone warns of vindication for their victims, chiefly indigenous peoples and wildlife which struggle to recover the sovereignty of their tribe or reestablish their species.

References to endangered creatures such as tigers and orangutans blur the line between animals and humans, not to demean indigenous communities but to mourn the severance of their bond with nature.

Once upon a time in the century before this,

My family lived with tigers who sprang alive

From the girth of their own elongated island.

And we send tourists there to rape this species,

And that is the kind of anger I will take

To slit through this panic

And hone my instinct for city locations

In relation to waters, and not spend a second

On the monsters of a false sense of isolation.

Barokka’s illustrations draw on indigenous motifs from Borneo. The author, a disabled activist who has campaigned for inclusive arts, also featured the word “BRAILLE”, printed in Braille, in the book to provoke readers into questioning the lack of resources for sight-impaired readers.

Born in Jakarta in 1985, Barokka was the first Indonesian writer to be accepted, in 2011, for a residency at the Vermont Studio Center, the largest international artists’ and writers’ residency program in the U.S. Her written works have been featured in a long list of international publications and collaborations, including Nanyang Technology Univeristy’s Junoesq Literary Journal (2015) and the Norwegian Writers’ Climate Campaign (2016).

Mongabay interviewed Barokka over email about her book, her activism and literature on environmental issues and indigenous rights.

What follows are highlights from the interview, lightly edited for clarity.

Mongabay: You dedicate the poem to your parents whose activism during the 1997 forest fires inspired the soul of your poem. Was there a(nother) defining intimate experience of yours that sparked your passion for protecting the environment and indigenous communities in Indonesia?

Khairani Barokka: Yes, my mother’s face is in the book as well, as the eerie-looking woman holding up the cloth. The dedication both parents have shown toward environmental issues throughout my whole life, and to this day, inspired the book. We were raised very aware of climate change and various other environmental issues, so it’s been a lifelong thing. I think the neuroses that inevitably stem from that spilled out in the form of Indigenous Species, which was originally a performance that I then adapted into book form.

Why did you pick this character’s tale to tell with this theme? How can we relate to the character?

To be honest, writing the poem was a very quick process back in 2013, a very stream-of-consciousness effort. I think it stems from the despair, anger and desire for hope that all of us feel about environmental ills. We are all being taken on a river journey with no way of knowing what will happen to us, so to speak, especially as the effects of climate change intensify. In that sense, we are all the narrator, whether we relate her emotions to the environment or to another, personal issue in our lives.

Indigenous Species is also a book about the very urgent need for women’s rights, and how no feminism should ignore the destruction of local women’s lives being wrought to satisfy consumerist needs of feminists elsewhere. At its very core, it is about a young woman trying to survive, and how interlinked environmental, social and personal distresses are.

Your poem highlights the consumerist city dwellers’ ignorance of indigenous peoples and the environment. Do you believe this is a problem that can be resolved?

I believe it will take an enormous amount of political will on behalf of policymakers, and self-awareness and fundamental changes on behalf of corporate actors, but also better and more widespread media attention given to environmental issues and indigenous and local voices. As ordinary consumers in cities, we need to vote with our purchasing power for better, more sustainable practices, and try to leave a smaller environmental footprint — but as we are all just trying to survive, it is also up to those with more power to listen to Kendeng women activists [those protesting a cement plant in Central Java], to pro-poor activists in Jakarta, to indigenous rights activists in Kalimantan, etc. All of us are connected to each other, and indigenous knowledge systems need to be respected and honored for their richness. 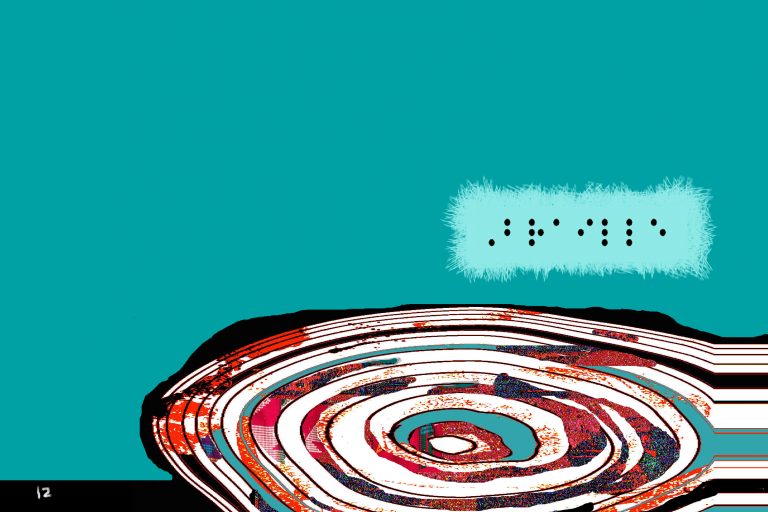 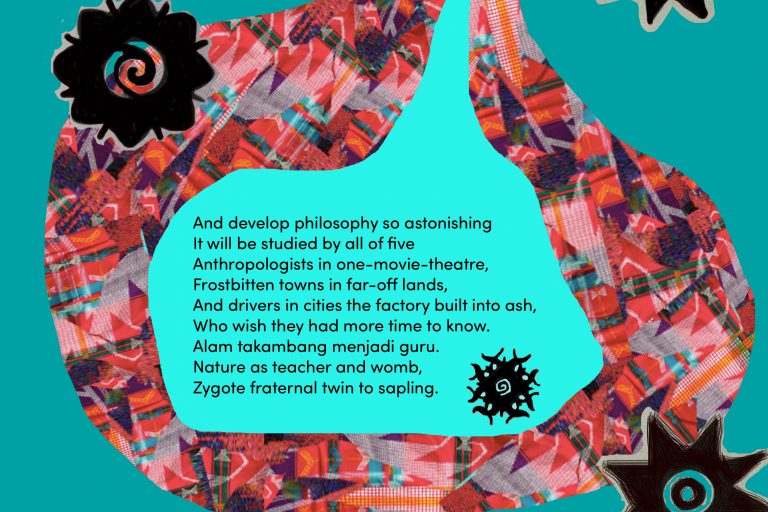 The poem is complemented with your colorful abstract drawings of nature that incorporate traditional motifs from Kalimantan’s Dayak cultures. What message do you wish to convey?

As the book says, the Dayak comprise many tribes, and I used glitch art-inspired collage to contextualize a number of patterns, both contemporary and traditional, as the introduction explains a bit further. The bright, jagged river that runs through the entire book is a contemporary pattern that to me symbolizes the forces of commercialism and consumerism. I wanted to show how ancient patterns and traditions need to be preserved, and also that danger can be in the form of brightness and chemical neon, as antithesis to the “darkest rainforest” trope of the rainforest as treacherous.

As a writer who has previously published an anthology of poems, why did you decide to dedicate a whole book for this one particular poem about the environment and indigenous peoples in Indonesia? How did your publisher respond?

My debut full-length collection of poems, Rope, will be published by Nine Arches Press this October, so Indigenous Species is actually my first solo book. If I’m honest, I had absolutely no expectations it would be so swiftly and smoothly picked up by a publisher, especially not one as supportive of my hare-brained ideas as Tilted Axis Press. Deborah Smith (the Booker-winning translator of The Vegetarian) contacted me about potentially working for Tilted Axis, initially, but I decided I wanted to be published by her instead! So I sent her three manuscripts (one of which has evolved into Rope), and to my immense surprise and delight, as it’s so experimental, she fell in love with Indigenous Species and completely understood what I was trying to do with it.

So as mentioned, it was first a poetry performance for the Melbourne Emerging Writers’ Festival in 2013. As I’ve been working on disability justice issues in the arts for the past six years, as a disabled creator myself, the intention was always to include visual art. However, lack of time and resources meant I had to wait until a residency at Rimbun Dahan in Malaysia in 2015-16 to really work on what form I wanted Indigenous Species to take. Finally, I decided it would be a book and art object that asks the question “Why don’t we find Braille, text and art in the same book?” The answer, of course, is inequities in publishing resources that disadvantage sight-impaired and blind readers. This is why there is the word “Braille” in flat dots like Braille on each left-hand side of the sighted version of Indigenous Species; the Braille translation will with any luck come out in 2018, but I wanted even the sighted version to recognize itself as a sighted version, for us sighted readers to be provoked.

Do you think literature can be a powerful and effective platform to campaign against environmental destruction and indigenous rights violations? Or does it only serve as a chronicler/observer that describes what’s happening?

Activism is often met with skepticism and backlash from influential figures. What’s it like being a writer with a passion for conservation and indigenous rights?

People have been incredibly supportive, thankfully. What I have learned from speaking about Indigenous Species here in the UK and in Jakarta, however, is just how varied people’s opinions are even within nominally pro-environmental circles. I think being Indonesian, with indigenous rights activism around me, has really clarified a lot of my positions. It’s made me not naive about environmental pasts, as well as very respectful of just how much more indigenous knowledge understands [about the environment] than Western “experts” in many cases. For that I’m grateful.

What other stories related with issues of the environment and indigenous rights in Indonesia would you like to see in literary form? And why?

There are infinite stories here, and I want all of them told that can be told — from a past scarred by colonialist resource extraction and [authoritarian-era] New Order policies, to the aftermath and continuation of these things that we’re currently seeing, to futuristic scenarios. I think Indigenous Species contains in its pages a call for all of these stories. Our future depends on people understanding the urgency of a need for change, and on elevating indigenous and local rights as paramount to the survival of us all on this beautiful, ailing, precarious planet.