Singapore statement on International Day of the Tropics: infrastructure deficit must be met sustainably (commentary)

By the middle of the century most of the world’s projected population of 9.5 billion people will be living in the Tropics, including almost two-thirds of its children. The region already hosts many of the world’s fastest growing economies, its urban centres are expanding rapidly, and it is likely to be disproportionately impacted by climate change. These trends are set to redefine the geo-political landscape. They will shift the trajectory of global development and place unprecedented pressure on natural systems in the Tropics – systems that host most of the world’s biodiversity and ecosystem services of global importance.

Publication of the landmark State of the Tropics 2014 Report, the result of an international collaboration between leading research institutions from across the Tropics, shined a light on the region and offered a different perspective to the world. Its assessment of social, economic and environmental indicators demonstrated that while nations in the Tropics have made extraordinary progress in recent decades, they face a suite of unique challenges that demand focused attention.

While none of the world’s regions are immune to the negative impacts of climate change or the need to address poverty alleviation, food security and environmental degradation, the Tropics evince a number of acute and unique scientific and social challenges. The tropical zone is the most biologically diverse on Earth, hosting up to 80% of the world’s land-based plants and animals and over 95% of its coral species and mangroves. Most of the world’s remaining primary forests are tropical and, along with coral reef systems, sustain the livelihoods of millions. Negative impacts on tropical ecosystems and biodiversity threaten these livelihoods along with human health, wellbeing, and prosperity more generally.

Tropical ecosystems and biodiversity are inherently vulnerable to small changes in climate because most species tend to occupy small geographic ranges, many are naturally rare and are often specialised to deal with a narrow range of environmental conditions. Many tropical species are already living close to their upper thermal limits with opportunities for migration constrained by habitat fragmentation and topography. Rising temperatures will change rainfall patterns and introduce additional stressors including pathogens, competitors and predators.

Major tropical ecosystems are already seriously affected. Recent extreme weather events have contributed to massive bleaching of coral reefs, one of the worst recorded instances of mangrove dieback, and record droughts and fires in rainforests and tropical peatlands. Climate change is likely to increase the frequency of these events and reduce the resilience of these systems and their capacity to recover.

The majority of the world’s poorest and most vulnerable communities are in the Tropics, and will be most affected by these environmental changes. The tropical zone includes all 37 UN member Small Island Developing States, 43 of the 47 Least Developed Countries, and the vast majority of low and middle-income countries (see Figure 1).

The implications of a warming world for livelihoods, food security, natural disaster risk, and health in the Tropics are especially concerning. A study published last week in Nature Climate Change suggests that rising temperatures and humidity will make the Tropics increasingly unlivable. Even under the most optimistic scenario for limiting temperature increases it suggests that by the end of the century almost half the world’s population will live in areas where the climate exceeds deadly threshold levels at least 20 days per year.

Nations residing near the equator may be hit hardest and experience climatic conditions with no existing analogues. Even small temperature increases in the equatorial Tropics could create conditions that have not existed on Earth for millions of years and that have never before been experienced by human communities. What are the implications? We don’t really know.

Marine fisheries in the region are already under growing pressure from international fleets that increasingly target tropical waters as stocks collapse elsewhere. Combined with climate change impacts, including already observed shifts in species distributions to higher latitudes, the impacts on food security and livelihoods of coastal communities, particularly in least developed countries, will be significant.

The changing climate, growing inequality, and increasing human mobility will combine to promote the further spread of tropical diseases and parasites. They will also combine to challenge the cultural and linguistic diversity of the Tropics. Language diversity is particularly high in Melanesia, the Amazon, equatorial Africa, Southeast Asia and India. Indigenous communities rely heavily on their natural environments, yet the rapid loss of languages and cultural diversity in the region mirrors, and in many cases is linked to, the loss of biodiversity. With this loss, traditional knowledge and wisdom accumulated over millennia relating to unique social and natural environments of the Tropics is similarly threatened.

With the world’s fastest growing populations, increasing affluence, rapid urbanisation and the overlying impacts of climate change, nations of the Tropics require significant investment in health, education and infrastructure to meet the region’s most significant challenges.

A new report on Sustainable Infrastructure in the Tropics, launched today by the State of the Tropics alliance in Singapore, finds that much of the world’s infrastructure deficit is in the world’s tropical zone. An estimated US$3.5 trillion needs to be spent globally each year to 2030 to meet the world’s growing requirements for energy, transport, telecommunications, water and sanitation. Almost 70% of this need is in tropical nations. 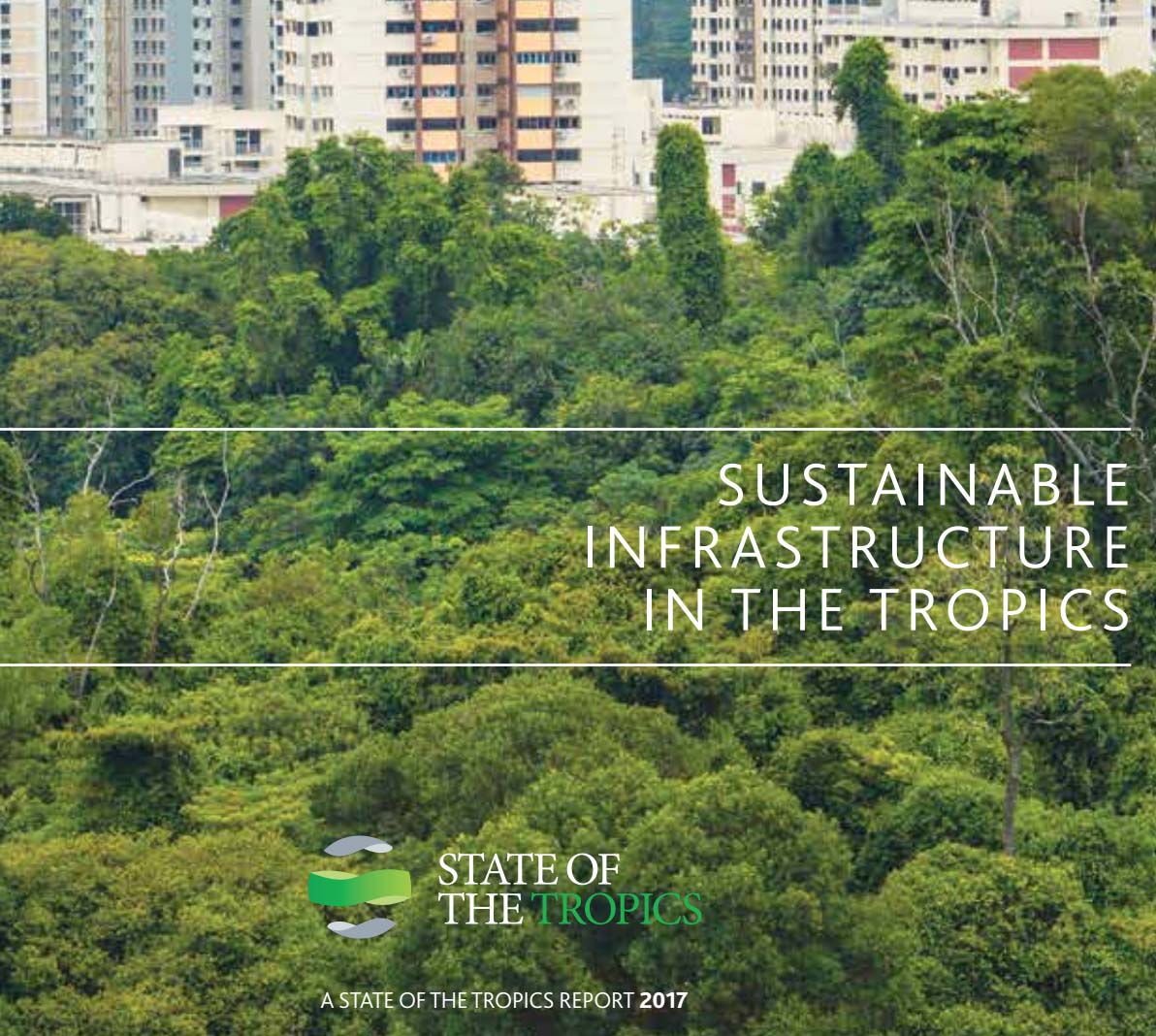 The delivery, operation and maintenance of infrastructure in the Tropics is subject to tropical climates and environmental conditions, including high heat, humidity, rainfall and extreme weather events not experienced elsewhere. Many forms of infrastructure such as roads, energy networks, and buildings are particularly vulnerable to extreme events and, compared with temperate regions, are affected by faster rates of deterioration.

Small Island Developing States, coastal communities and the urban and rural poor are at the frontline of many of these impacts, particularly in relation to sea level rise, heatwaves and natural disaster risks. The need to climate-proof infrastructure to help tropical countries adapt is an imperative, while the broader need to reduce future warming by investing in infrastructure, technologies and practices that mitigate climate change impacts ought to be a global priority.

Tackling the complex challenges tropical nations face fundamentally requires improving technical and institutional capacity and effective governance in the region. However, research and development activity in the Tropics is not proportionate to the challenge ahead. In the decade to 2013, tropical nations dedicated an average of 0.5% of GDP per annum to research and development compared with 2% in the rest of the world. Since 1990 tropical nations have produced only 5% of scientific and technical journal articles, and only 10% of university science and engineering graduates came from institutions in the tropics.

While the tropics do enjoy some spill over benefits from R&D undertaken outside the region, capturing the benefits of such activity requires capacity to understand, adapt and operate novel technology and infrastructure. Critically though, science, technology and engineering solutions developed outside the region are not always transferable. The particular climatic, ecological and cultural characteristics of the tropics demand dedicated R&D effort from within the region.

Implementing the UN’s 2030 Agenda is dependent on understanding the interactions and trade-offs between the Sustainable Development Goals, and will require individual nations to define their own priorities and targets, implement actions and monitor outcomes by collating reliable data and statistics. These points underlie the critical need for tropical nations to acquire their own independent capacity to develop and manage sustainable and resilient infrastructure, health, social and environmental research capacity for their own local circumstances.

Tackling the interconnected social, economic, environmental and political issues and unique challenges facing the tropics will require innovative, interdisciplinary and inter-institutional collaborations. To this end, next week a Rockefeller Foundation supported meeting of leading experts from a range of disciplines and sectors with an interest in tropical development issues will convene to explore avenues for new partnerships and associations which would facilitate collaborations on research, leverage activities to advance science-based policy, and strengthen capacity building and knowledge sharing on health, environment, education, sustainability and development priorities in the Tropics.

In her remarks to the General Assembly on its adoption the Australian Ambassador to the UN, Gillian Bird, summed up the rationale for a more focussed approach to tackling tropical development challenges:

“Tropical challenges need tropical solutions… Much of the activity and investment in support of the Sustainable Development Goals will take place in the Tropics, particularly in the areas of poverty eradication, health, education, urbanisation, the health of our oceans and protection of biodiversity and environmental values. This means that success in the Tropics is a significant contribution to our global success.”

People have lived and thrived in the Tropics for millennia and continue to develop innovative solutions to life in the region. Drawing on the human potential of the Tropics and building institutional capacity, improving governance and developing effective partnerships to develop tropical solutions for tropical challenges, by and for the people that live there, will be critical for meeting the world’s ambitions for a prosperous and sustainable global future.

Mark Ziembicki is Senior Researcher in the State of the Tropics Alliance, and Stewart Lockie is Director of The Cairns Institute, both of which are based at James Cook University

Download the new report on infrastructure in the tropics here.