‘A man schooled in the Amazon:’ Q&A with director of new feature film about the fight to save the rainforest

Frontier is a forthcoming feature film by director and producer Matthew Wortman that is being billed as a “modern-day, real-life Western.” It tells the story of John Cain Carter, a rancher from Texas and a former Special Ops Ranger who arrives in Brazil with his wife and kid looking to start a new life in the Amazon rainforest.

“Arriving full of idealistic dreams to save the rainforest, John Carter is shocked to find his land invaded by squatters, the forests being illegally burnt and logged and a corrupt police force unwilling to take action,” according to press materials for the film.

Carter is the founder of Aliança da Terra (Land Alliance), a Brazilian non-profit organization that works directly with ranchers in the Amazon to reduce the environmental and social impact of their operations. In a 2007 interview with Mongabay, Carter explained the group’s core mission is to give producers the right market incentives to reduce their impact on the forest.

Wortman, who previously won an Emmy for his documentary Nefertiti Resurrected, intends to cast “real life characters,” such as John Carter himself, alongside professional actors in order to tell the true story of “Those fighting to save [the Amazon] and those fighting to take it.”

Frontier is due out in summer 2017, but the idea for the film first came to Wortman a decade earlier when he was in Brazil directing a piece for the BBC called “Global Harvest,” which was about how Brazil was overtaking America in agricultural production and was going to feed the world.

“I was looking for a story to end the film with a real upbeat message and really sort of went through a number of stories and then my researcher said ‘There’s this crazy story about this Texan who lives in the Amazon,’” Wortman told Mongabay. “And I thought, ‘Well, this sounds interesting.’ So I went to go and meet [John Carter], and I was captivated by him, really, he’s a very charismatic figure. I think he’s a visionary.”

Wortman asked to see the squatters living on Carter’s land: “So he showed me the squatters’ camp and really I think it was at that moment I suddenly thought, ‘Wow this is really a phenomenal story and it’s something the world doesn’t really know about.’ People think they know about the Amazon, but they have a very certain narrow perspective on it.”

While he’s very aware of how problematic it is to use an American as the main character in telling the story of what’s happening in the Brazilian Amazon, Wortman said that he’s come around to believing it might actually bring more attention to the situation in the Amazon — and help challenge people’s notions about what’s actually going on.

“It’s no good making movies that no one wants to watch, and I’m afraid to say that the market is still led by North America,” he said. “But what I loved about the story was the fact that it really challenges people’s perception about things – and in Brazil too, because, you know, here’s the gringo coming into Brazil telling everybody that he thinks he knows better. And actually, the story’s not about that. This is a man, as John puts it, that is schooled in the Amazon. He’s come from a military background and his first response is as a soldier. And then he has to realize that actually it’s no good fighting with people. It’s actually, the only solution, at the end of the day, is going to be by bringing these disparate groups together to solve these issues that are going on.”

Another key aspect of the story is John’s wife Kika, who comes from a long line of ranchers in the Amazon and was very instrumental in helping bring all of the disparate interests in the Amazon together. In fact, according to Wortman, Frontier is ultimately all about John and Kika’s marriage.

“That is what comes to the fore, is John and Kika as a couple and how they’re going to survive in this extreme situation,” Wortman said. “We see what is going on in the Amazon through the prism of their marriage.”

Wortman says that he initially approached the project with some of the same pre-conceptions he expects his audience to have: namely, that ranchers and other producers of goods in the Amazon are the bad guys, the people responsible for all of the forest fires and deforestation and land-grabbing. That was the story Wortman thought he was going to tell, before he realized the real story waiting to be told.

“It’s funny because, you know, you go in as a filmmaker and you have a kind of slightly, dare I say, Tarantino-esque approach,” Wortman said. “You think it’s gonna be like this and you say ‘Oh yeah okay this is going to be quite funky.’ The thing with John and Kika is it’s been a searing process writing this, where any inconsistency or anything that’s not truthful or that doesn’t get the veracity or the detail right will just get ripped out. Of course I wouldn’t want to do a film in any other way, but it’s been quite a process. And actually as a filmmaker you have to have the courage to follow what the story is really about.”

What emerged, Wortman says, is this couple, John and Kika, who went into the Amazon with their eyes wide open and, from the audience’s point of view, appear to be entering a paradise where they will be able to make their own living off the grid. “So I created this little window of paradise and then after day one it starts going wrong,” he said. “There are loggers on his land ripping down his forest, and there are land-grabbers, and there are squatters. He tries to get the squatters off but what it reveals is behind that is a very sinister organized crime syndicate where they put squatters in first on the land to try and extort the land owners.”

This, presumably, is where the Western film tropes come in, as John and Kika are forced to fend off one interloper after another in a lawless region reminiscent of the Wild West. But the real enemy is not who you might initially think it is. “I flew right into the eye of the storm. You have these kind of clichés, of what people hold on to: Ranchers, producers, they’re the bad people. And actually that’s what I love about this story: Here’s a rancher coming up with solutions to actually save the forest or to prevent any more deforestation. And just to come back to the marriage part of it, John and Kika, what happened to them in Mato Grosso in those seven years is a microcosm of what is going on across the whole Amazon basin. So by telling the story, by telling it through two individuals right in close proximity to frame, we see the story and we glimpse the backdrop of the forest burning.”

But as much as it’s a Western and a love story, Wortman says the film is “a snapshot of what is going on in Brazil right now, which is the first wave that comes through. That’s why it’s called Frontier. The first wave comes through and I’m afraid the people who pay the price are the indigenous tribes. Also what pays the price is the forest. Forest is worth nothing, and this is what the story is about. You know John, this is what he showed me when I made that documentary. He grabbed a clump of grass from the pasture and held it up and said, ‘Matthew, this is worth four times more than that,’ and he pointed to the forest. ‘The first thing that goes is the forest because you rip it down, you seed it, you put the pasture in, you put the cattle in, and your land evaluation goes up at least four times.’ And then the second wave that comes in is the next generation, the daughters and the sons of those original ranchers. And Brazil hasn’t yet caught up with the frontier. Because at that point it’s a lawless zone. There is no governance, there is no police. And that’s why there’s terrible, terrible stories of these squatters and land-grabbers and these killings of indigenous people because the government is not yet caught up with what’s going on.”

The goal, in the end, is to be as true to what’s going on in Brazil as possible in order to show people the complex reality of what’s happening in the Amazon rainforest. “This is not an anti-Brazil film, this is a pro- Brazil film,” Wortman says. “Getting that balance right is a major struggle.” 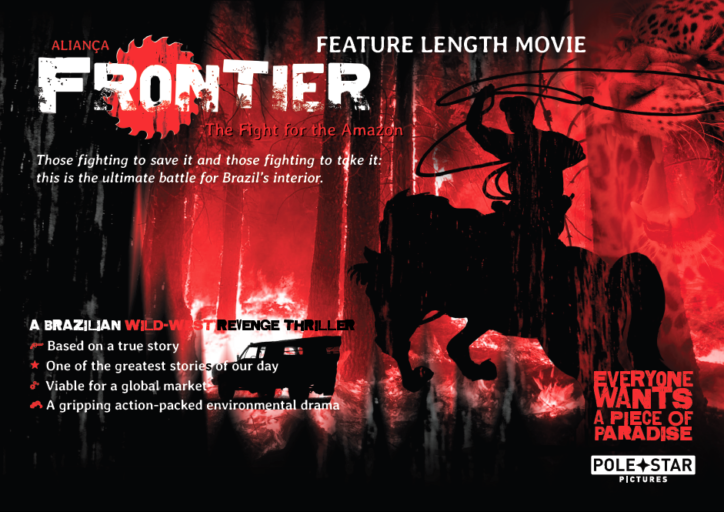