A closer look at a deforestation “hotspot” in central Peru finds oil palm expansion to be the primary driver of forest loss. That’s according to a recent report by Monitoring of the Andean Amazon Project (MAAP), which analyzed high-resolution satellite imagery in one of several patches of deforestation spattering the central Peruvian Amazon.

Earlier this year, MAAP identified several deforestation hotspots in Peru, each indicating an area where a high density of forest loss was detected in 2015. And a clear trend was evident: Most hotspots were found in the central Amazon, home to the country’s highest deforestation rates, in addition to myriad endemic plants and animals.

Since unveiling the hotspots in March, MAAP has used satellite imagery to investigate the likely drivers of deforestation in each area. Their earlier analyses pegged cattle ranching as the main reason behind forest clearance. Released last week, MAAP’s latest analysis revealed another driver of forest loss in the region – oil palm development.

High-resolution satellite imagery shows unequivocal signs of oil palm in a hotspot located in northern Huánuco Department, write MAAP researchers. They estimate that 558 hectares of forest were razed in this region to establish small and medium-scale plantations between 2010 and 2014.

“We found that the major driver [in northern Huánuco] was small to medium scale oil palm plantations,” Matt Finer, lead MAAP researcher and author of the report, said in an email to Mongabay. “Large-scale oil palm often gets a bad rap, but what safeguards are in place to ensure that smaller-scale projects are not driving deforestation as well?”

Many of these events may be illegal. According to Finer, the deforestation hotspot in northern Huánuco is not in a region zoned for agriculture, which suggests that the oil palm activity was likely illegal.

But according to Ashwin Ravikumar, an environmental social scientist at The Field Museum, it’s not a guarantee. “Whether or not it’s illegal really depends on how they’re operating,” Ravikumar told Mongabay. “It’s possible that the government, or a regional government, sold the land or delivered a title to a company [to develop oil palm].” 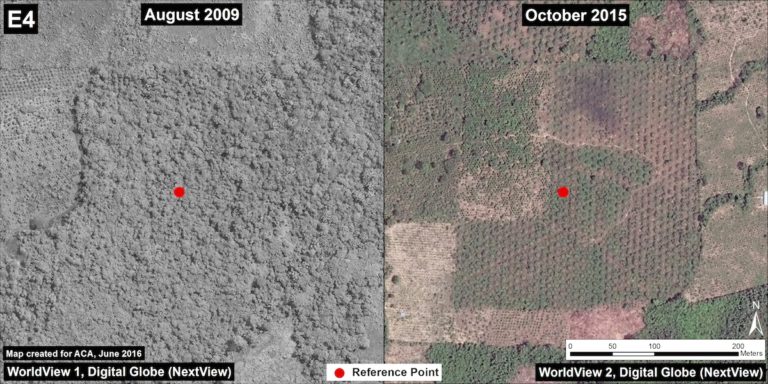 Deforestation in northern Huánuco may be accelerating, according to data from the University of Maryland.

The Global Land Analysis and Discovery (GLAD) dataset revealed around 6,300 alerts in northern Huánuco since the beginning of last year, each pointing to an area where tree cover loss has likely occurred. Well over half of these were detected in 2016, suggesting a recent upswing in forest loss. However, it remains unclear how much this was driven by oil palm expansion.

According to Ravikumar, Peru has a history of supporting oil palm development and today, political conditions continue to facilitate expansion. “Based on the trends we’ve seen, there’s every reason to believe that oil palm proliferation is continuing and maybe accelerating in Peru,” Ravikumar said. “National and regional governments have created enabling conditions for oil palm to be established and…for smallholders to participate in oil palm production.”

As MAAP’s new analysis points out, the acceleration of oil palm production comes at a cost. In fact, new research shows that over 50 percent of oil palm plantations in Peru were established on deforested land. Despite current trends, Peru claims to support the sustainable use of Amazon resources – a position reinforced by laws that date back to 1998. However, issues of land tenure often undermine the sustainability of oil palm expansion, according to a recent report by the United States Department of Agriculture (USDA).

While the USDA estimates that over one million hectares of land are available for “zero-deforestation development” in Peru, these landscapes may be owned and inhabited, or require government classification before farming can take place – a complicated and time-consuming process, the report states. As a result, it’s often easier for companies or smallholders to cut back the forest.

But Ravikumar points it’s not all doom and gloom. He said that there are several ways Peru might be able to “move the needle” on oil palm as a driver of deforestation. These tactics include land tenure reform and voluntary commitments to zero-deforestation by companies operating oil palm plantations.

“Monitoring and raising international awareness, like what MAAP is doing, is key,” he said. “By surfacing this data, we can start galvanizing the political will to enforce laws about oil palm.”

According to MAAP’s estimate, deforestation in 2015 was the second highest on record. Going forward, the key question is whether Peru can implement working solutions in time to meet commitment to net-zero deforestation by 2021. Monitoring projects, like MAAP, will be the first to find out.