High-resolution satellite imagery released earlier this month by Monitoring of the Andean Amazon Project (MAAP) revealed forest regrowth in previously mined areas of Amarakaeri Communal Reserve — an indigenous protected area in the famous Madre de Dios region of Peru. Amarakaeri is home to the ancestral land of Harakmbut, Yine and Machiguenga peoples and boasts exceptional biodiversity, including many endangered and endemic species.

“This is the first example of regrowth we have seen across the major mining zones in southern Peru,” said Matt Finer, lead MAAP researcher, in an email to Mongabay.

Artisanal gold mining began in the southeastern corner of Amarakaeri in July of 2013, according to a previous analysis by MAAP. Two years later, miners had leveled 11 hectares of forest to sift through topsoil, searching for precious gold flecks. Soon thereafter, the Peruvian government — led by the National Protected Areas Service, SERNANP — intervened to uproot the illegal miners. With evident success.

MAAP’s new imagery shows that mining has indeed ceased in the southeastern portion of Amarakaeri Communal Reserve since the 2015 government crackdown, allowing the forest vegetation to recover.

“This finding may represent good news regarding the Amazon’s resilience to recover from destructive mining if it is stopped at an early stage,” MAAP writes in a blog post. 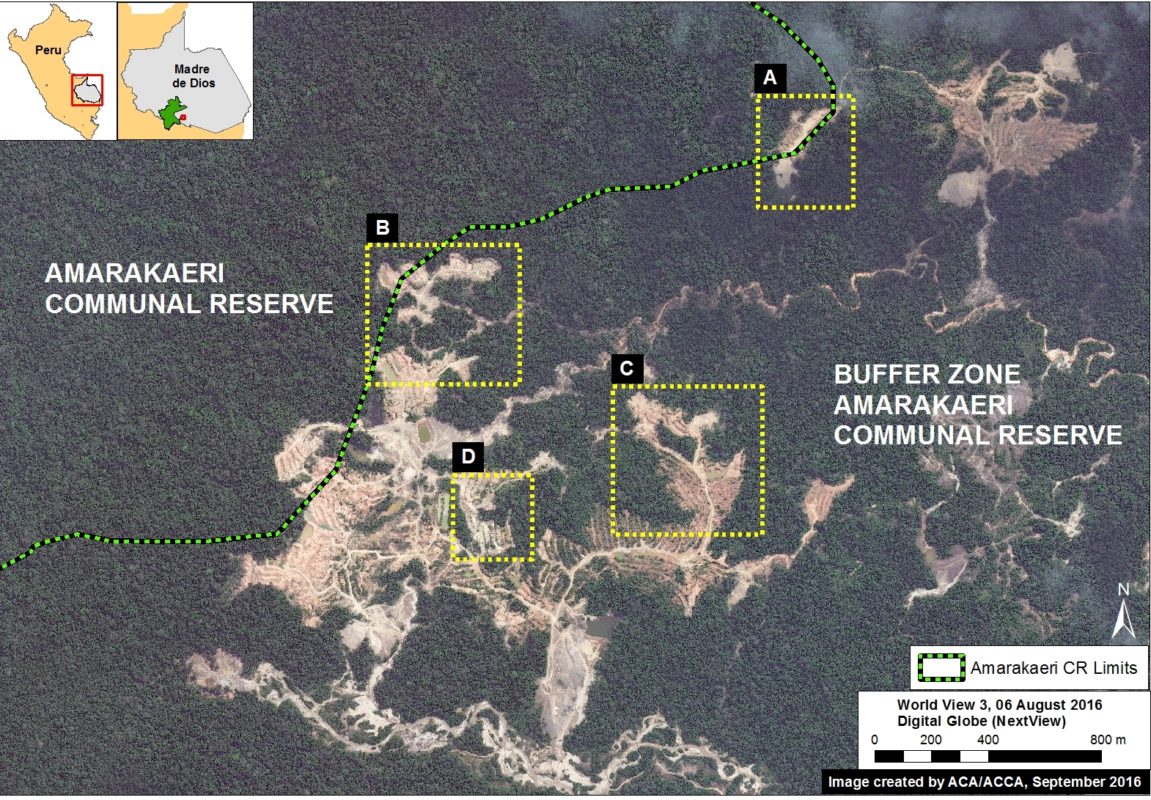 But you don’t have to travel far to find fresh impacts of gold mining and other human activities in Peru.

In the last three months alone, around 4,000 GLAD alerts were detected in the buffer zone immediately east of Amarakaeri, each pointing to an area where tree cover loss has likely occurred. That number doubles if you track back to the beginning of the year, with more than 8,000 GLAD alerts detected since January. The majority of these deforestation alerts occurred within particularly large, unbroken tracts of primary forest called “Intact Forest Landscapes.” These forests typically retain native levels of plants and animals, indicating a vast potential for biodiversity loss if deforestation continues unabated in this region.

Zooming out to Madre de Dios Department, the region in which Amarakaeri is nested, the pattern of mining-driven deforestation intensifies. Illegal miners had razed an estimated 100,000 hectares of forest – an area 17 times larger than Manhattan – across the region by May 2016, according to Peru’s environment ministry (via Reuters). Much of this destruction has occurred in protected areas, such as Tambopata National Reserve – another area where MAAP has documented a mining invasion.

MAAP’s new imagery may be a positive chapter in what has become a destructive saga of artisanal gold mining in Peru. According to an economist cited in The New York Times, artisanal mining rose over five-fold between 2006 and 2015, while production from legal mining fell by nearly a third. Artisanal miners generate an estimated $3 billion annually and yield a large percentage of the gold produced by Peru – the world’s fifth largest producer, according to a 2013 report by the U.S. Geological Survey.

But these profits come at a cost that exceeds deforestation. As reported by Reuters, informal gold mining – which has little, if any, regulation – dumps around 40 metric tons of mercury into Amazonian rivers each year. Communities exposed to mercury from mining camps exhibit a range of maladies, from chronic headaches to permanent brain damage. The problem received international attention earlier this year when former President Ollanta Humala declared a 60-day health emergency to address rampant mercury poisoning in Madre de Dios communities.

For Amarakaeri, the scars are starting to heal. But as Finer points out, the key question is whether the illegal miners stay out.

“On one hand, mining continues to escalate in southern Peru, so reinvasion is always a concern,” Finer told Mongabay. “But on the other hand, SERNANP, together with the indigenous management committee of the reserve, seem to be prioritizing this zone, so hopefully there will be the necessary resources to keep illegal miners out.”