No fire, no food: tribe clings to slash-and-burn amid haze crackdown

The dry season has returned to Indonesia, and with it the annual agricultural fires that blanket the region in a choking haze. Will the government’s efforts to stave off another disaster spell hunger for indigenous peoples? by Cory Rogers on 1 September 2016

Come August in Kapuas Hulu, West Kalimantan, it is time for the indigenous Dayak Iban to burn the land and plant the dry rice, or ladang, that will feed them the following year.

“If we don’t plant ladang, we don’t eat,” said Apay Hudi, a lithe, silver-haired resident of the Sungai Utik longhouse, pausing as he fastened a new handle to an old, rusty field machete.

He said local officials were trying to wean the community off ladang and onto wet paddy cultivation, but irrigation challenges meant the fields weren’t ready.

Needing ash for fertilizer and lacking suitable alternatives, Hudi said burning for ladang was a fait accompli. “Besides burning, there’s no other way for us to plant it.”

The government sees things differently. One afternoon a few weeks ago, military men showed up at the longhouse with a warning: Stop the ladang burning or face fines, even jail time. Dozens of Dayak tribes in the area have been given a similar warning, as have farmers across the country — part of Indonesia’s crackdown on the annual scourge of haze-belching agricultural fires.

Collectively, these Dayak tribes occupy a sixth of the district of Kapuas Hulu, a 28,000-square-kilometer chunk of lowland forest at the eastern edge of West Kalimantan province, deep in the heart of Indonesian Borneo. Though these homelands have been mapped, they are not recognized by the government, meaning communities like the Iban are on constant guard for encroachments by oil palm plantation firms.

Twenty-eight Iban families live in the Sungai Utik longhouse with Hudi, one of several customary Dayak homes still standing in the district. The space is a marvel of interdependence: in the 200-meter-long foyer, young and old make handicrafts and prepare food by day, waiting for groups tending the fields and foraging the forests to return home. In the evening, adults gather to sip ijuk, a sap drained from the enau tree, and chat well into the night.

Apay Janggut, head of the Sungai Utik longhouse. Photo courtesy of the Indigenous Peoples Alliance of the Archipelago

The soldiers’ warning was sudden, but not altogether unexpected: it stretches back to an instruction issued by President Joko “Jokowi” Widodo at the height of last year’s haze crisis, one of the worst on record. The instruction ordered a law enforcement crackdown on fires, and Jokowi threatened to sack local officials who failed to rein them in.

With smallholder slash-and-burn a consensus driver of Indonesia’s annual haze epidemic, the instruction, as well as Jokowi’s ban on peatland development and new oil palm concessions, were hailed as much-needed reforms.

Indeed, on the strength of those measures, record numbers of arrests and, above all, a milder dry season, fires are down 61 percent compared to last year, according to the National Disaster Management Agency.

But the threat of prosecution is forcing indigenous groups like the Iban into a high-stakes wager: burn for ladang and chance arrest, or comply with the ban and risk a food crisis. It also contradicts a 2009 environmental law designed to protect indigenous slash-and-burn.

“They said they would provide paddy, but where is this paddy?” said Sungai Utik village head Apay Remang.

“If they say we can’t burn ladang and there’s not paddy to farm, we won’t be able to eat,” he said.

“For us, the chance of a food crisis is extraordinary.”

An Iban man in Sungai Utik. Photo courtesy of the Indigenous Peoples Alliance of the Archipelago

‘We don’t burn the forest, we burn ladang’

Despite the fire ban, haze is back in August, with farmers taking advantage of peak dry weather conditions in Sumatra and Kalimantan to burn land for a variety of crops. Sixty percent of the fires burning last week were started outside company concessions, according to Global Forest Watch.

But in Kapuas Hulu, as in other regions, slash-and-burn is a varied practice, and experts suggest that by failing to tailor policy to the different types, indigenous farmers have been unfairly targeted.

“We need to have powerful institutions at the local level to control the burning, because it is impossible for zero burning in agriculture,” said Herry Purnomo, a scientist at the Center for International Forestry Research (CIFOR), a thinktank based outside Jakarta.

“But we need also to have a space for tradition, and [for] indigenous people to do burning.”

For hundreds of years, Dayak tribes have used fire to clear forests and fertilize soil as part of a rotational system called swidden, where 1-2 hectare plots of land are farmed for a year or two before being abandoned to regenerate. Five to 10 years later, the reforested plot is cleared again by fire and the cycle repeats.

“The important thing to understand,” explained Remang, the chief of Sungai Utik village, “is we don’t burn forest. We burn ladang.”

Iban lands being burned, in other words, are better understood as regenerated ladang grounds long held in the swidden cycle.

“We have our own ‘spatial plan’ that has been passed down through the generations, which includes where you can and cannot plant ladang,” he said.

Though Iban zoning includes areas for rubber planting, subsistence ladang farming remains the prime focus of the community’s agricultural life, and according to Remang, there are customary fines in place to ensure fires rarely jump fields.

“Traditionally, local people have all kinds of safeguards in place when they burn their fields…whole systems to keep wildfires from escaping,” said Moira Moeliono of CIFOR.

“Compared to the overall scale [of burning in Indonesia], the patches burned by swidden is not really that significant,” she added.

In a burning observed by Mongabay in Sungai Utik, such precautions were on display.

Two men and one woman patrolled the edge of a soccer field-sized ladang plot set ablaze near the longhouse, dousing flames that looked poised to escape with jugs of water. When the jugs ran out, children were on hand to whisk them away. 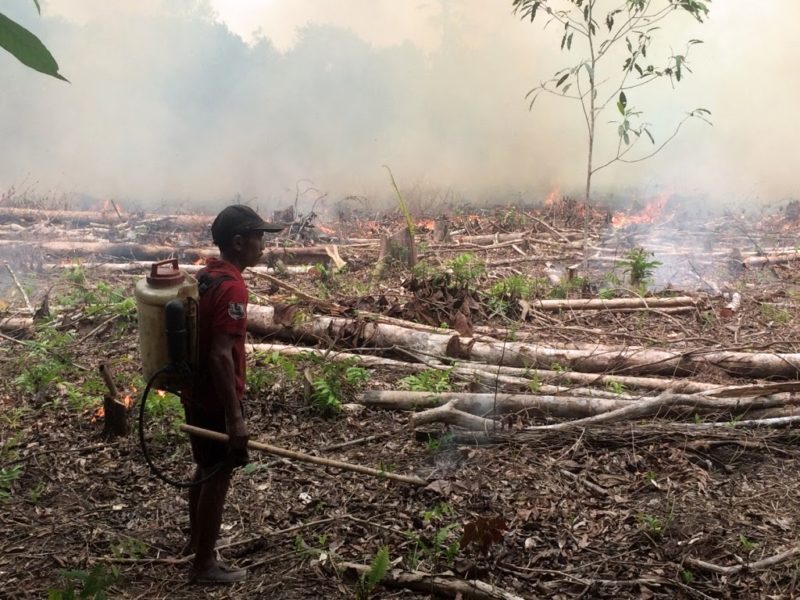 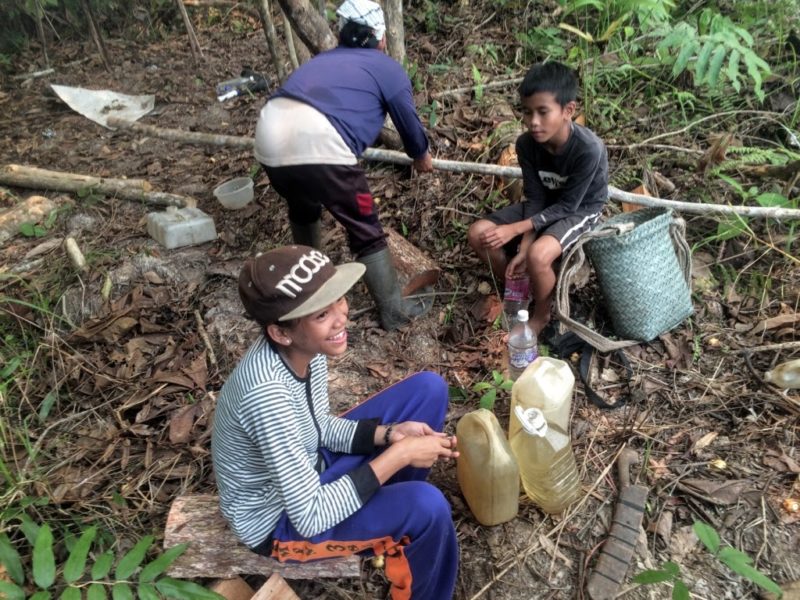 In a matter of hours, all that was left of the blaze were smoldering stumps and smoke curling up in the breeze.

On the other side of Kapuas Hulu’s forest-burning spectrum are the smallholders and plantation farmers who eschew the shifting model of cultivation and have no customary fines to enforce safe burning. The impact of these “forest pioneers” on deforestation and haze is likely greater than ladang burning, but a paucity of data makes it hard to prove.

The explosion of pioneer farming in West Kalimantan stretches back to the central government’s transmigration program, when thousands of poor farmers were brought to the province to farm and get new oil palm plantations — a development drive folded into the transmigration program — up and running.

Huge swaths of forest were taken and burned to make way for migrant villages and to plant oil palm, and much of it was taken from indigenous territories. Individual families were given two-hectare farms, and many were obliged to plant oil palm for the government-backed estates nearby.

Importantly, these migrants were most focused on the cultivation of such cash crops.

According to one 1997 study, on these farmlands, “land is usually not fallowed, but is used continuously, and is abandoned only after total or near total exhaustion of the native fertility of the soil, since there is no long-term plan to again return to the same site.”

It is a model predicated on endless deforestation and, with slash-and-burn still in wide use as the cheapest clearing method, inevitable haze.

“When transmigrants started clearing forests…they didn’t have the local knowledge required [to keep them from spreading],” CIFOR’s Moeliono explained. “That’s when more forests were opened, and these were the ones more susceptible to [turning into] large fires.”

The haze risk was especially acute because — unlike ladang farmers — pioneer farmers planted on highly combustible peatlands where fires are the hardest to put out.

“Traditional Dayaks don’t open land on peat…Even today, the local people say, ‘we are not opening ladang on peat because you can’t plant ladang on peat’,” said Moeliono.

By equating subsistence swidden with the sedentary, non-rotational cultivation of cash crops like oil palm, the government crackdown was continuing a long-running misunderstanding of indigenous farming, Moeliono suggested.

“This blaming of subsistence agriculture for deforestation has been going on since the Dutch colonial times, when it was called ‘robbing agriculture,’ as it was said to be ‘robbing’ the land of its fertility,” she said.

“I think the knowledge about how swidden really works is not really considered or known in the large temporal and spatial context,” she added. “If the fallow period is long enough and the level of the population not that high, it is probably quite sustainable.”

According to Mina Setra, deputy secretary of the Indigenous Peoples Alliance of the Archipelago (AMAN), the clampdown on ladang is not only questionable from a conceptual frame — it is also illegal.

Indonesia’s 2009 Law on Environmental Protection and Management “clearly prohibits the burning of forest for large plantations like oil palm,” she told Mongabay.

“But there is also an article [Article 62, Paragraph 2] that says for plots of under two hectares, smallholders or indigenous communities can plant local crops.” This has more legal force than a non-binding presidential instruction to stop fires, she added. Indigenous ladang farming should thus be exempt from the ban.

“The presidential instruction doesn’t talk about that, it just orders ‘no burning’,” Setra said.

“This is Jokowi’s error,” she added.

To correct it, CIFOR’s Purnomo said districts ought to pass their own laws on the question of open burning.

“Every district has different [demographic and agricultural] characteristics,” he said, adding it could be difficult for officials to distinguish between indigenous and non-indigenous farmers given the widespread problem of overlapping land claims; policies issued from Jakarta, he suggested, would invariably be misapplied in the hands of local law enforcers dealing with such complexity.

“The solution, perhaps, is each district needs to develop a district regulation, to regulate open burning, including for palm plantations or investment coming from government,” he said.

This is especially important to prevent future fires. Of the 11 million hectares covered by plantation permits, Purnomo said, only 3 million have been planted.

“That means there are 8 million hectares that have not yet been planted. Many things can happen with that land.”

A Dayak Iban boy in Sungai Utik. Photo courtesy of the Indigenous Peoples Alliance of the Archipelago

In Kapuas Hulu, groups are not waiting for officials to budge on their position, and have pledged to resist the fire ban to ensure they can put food on the table.

In a meeting held last week, Remang said, area Dayak leaders made a pact: if an indigenous individual anywhere in the district gets arrested for burning ladang, every tribe has agreed to journey to the capital Putussibau to get them freed.

“For hundreds of years we’ve all burned ladang. We didn’t have a haze problem before, and now they say the farmers are the ones responsible,” Remang said.

“This is false. Indigenous peoples are not the cause of the haze in the republic, and we can’t let them become the scapegoat for it.”