The development of an oil palm plantation, which was thought to have been pretty much abandoned by the American company that ran it, has resumed in the Southwest Region of Cameroon, according to satellite data released by Greenpeace today on its website.

The plantation, once owned by New York-based Herakles Farms, became more famous over the past seven years for its environmental missteps and social blunders than for producing palm oil. Organizations including the Oakland Institute, the Forest Peoples Programme, and Greenpeace partnered with local groups to oppose the company’s work near Cameroon’s border with Nigeria.

The coalition charged that the company had obtained the land illegally, without adequately informing local populations of what they were doing. And opponents also said the plantation was too close to Korup National Park, a bastion of endangered biodiversity.

Now, a team from Greenpeace has tracked down evidence that the plantation is under new leadership, said Amy Moas, a senior forest campaigner with Greenpeace. A document from the Cameroonian Ministry of Justice indicates that a man named Jonathan Johnson Watts was named “chairman and general manager” of the interest at some point before November 2015.

Moas said Watts is British and works for Sithe Global Sustainable Oils Cameroon, once a subsidiary of Herakles Farms. The company appears to have focused its efforts on salvaging the land for oil palm near the town of Nguti, while forsaking the other sites near the towns of Mundemba and Toko.

Moas explained that between 2011 and the spring of 2015, only about 350 hectares of land was cleared. She attributed a lot of the slowdown to the robust opposition waged by Greenpeace and other members of the coalition, which began in earnest in 2013.

But in May 2015, just as Greenpeace began to hear from people living in the area that a different company had taken over the land originally leased to Herakles by the Cameroonian government, satellite imagery showed a coinciding flurry of activity near Nguti.

“The rate of forest clearing is dramatically higher than it’s ever been in the history of the project,” Moas said in an interview. More than 500 hectares of forest were cleared from an area near the village of Babensi II by January 2016. “Since the new ownership and the new manager took over, they have shown no signs of abandoning or scaling down the project.” 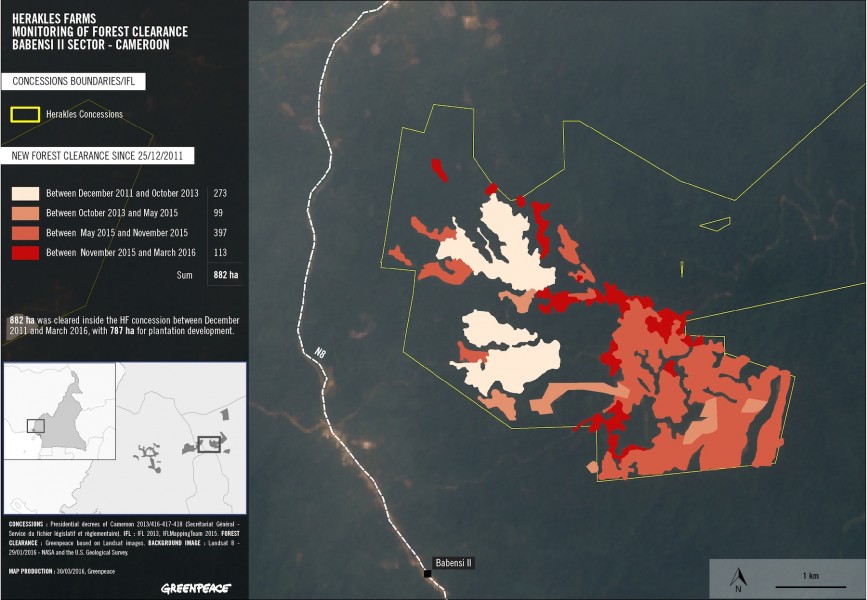 But the pace of work on the plantation is one of the few changes that Greenpeace has observed. Moas said they’ve seen “no signal for that matter of engaging with communities in any meaningful way or doing environmental assessments” – key missing elements of Herakles’ approach to the project that led to the opposition’s original indictment.

According to Greenpeace’s research, residents of the towns of Mundemba, Toko, and Nguti, as well as settlements in the surrounding area, are still waiting for the fulfillment of promises by Herakles. Locals said that the company offered jobs, small oil palm planation development, and other forms of economic assistance to the affected communities, which, in addition to being intended to garner support for the company’s plantation development, are required by Cameroonian law in some cases.

“It’s a tough situation,” Moas said. “They’ve suffered a lot. Many, many of them have not been paid for work that they had done prior to being laid off.”

What, if anything, the new management will do about these promises, as well as the persistent environmental concerns surrounding the project, remains a mystery, said Moas. “Greenpeace has written to them and tried to engage in dialogue, and that’s been met with silence.”

Cameroon’s director general of Planning and Regional Development, Oum Eloma Janvier, reportedly visited the site in late January and praised the new investors for their work to develop local communities, according to news site AllAfrica.com.

For its part, Greenpeace plans to release a report that presents its ongoing economic and environmental analysis of the situation sometime this summer. Mongabay made several attempts to contact people in Cameroon affiliated with the Herakles project, including contacting someone who lists himself as the company’s vice president of conservation, as well as a visit to the company’s now-shuttered office in Limbe, but received no response.

Moas pointed out that the change in ownership doesn’t change the destructive potential of an oil palm planation in this location. Making that case to the Cameroonian government now is particularly important because the three-year temporary lease granted by the president in 2013 expires in November of this year. At that point, the government can decide whether a permanent lease should be granted, allowing further development of the plantation, or if it should not be renewed.

“We’ve always recognized that this was the wrong project in the wrong place,” she said. “It’s bad for community members. It’s bad for the environment and endangered species.

“The coalition – and Greenpeace in particular – was never against the Herakles Farms company,” she added. “It was always about this plantation.”

Watts was previously involved with an oil palm project in Ghana, in which the British company he worked for, Volta Red, took over an oil palm plantation that was also owned by Herakles Farms. But given the level of international outcry against this development, Moas said she is “surprised” that the new leaders are pushing development ahead in such a big way.

“We thought it was pretty clear that it was the wrong project in the wrong place, and it was just not a model that should go forward,” Moas said.