Asia Pulp & Paper’s (APP) plans to operate a giant mill in South Sumatra later this year have raised some uncomfortable questions about the veracity of the conglomerate’s lauded no-deforestation commitment and the potential environmental impact on one of Indonesia’s most-fire prone provinces.

The new mill, which is being built by PT OKI Pulp & Paper Mills, would increase APP’s fiber demand by 73% when it begins to operate at full capacity — and require nearly quadruple the fiber its plantations in South Sumatra have produced in the past, according to an exhaustive report into APP’s expansion plans released this week by a dozen environmental organizations.

The report, titled “Will Asia Pulp & Paper default on its ‘zero deforestation’ commitment?”, offers compelling evidence that APP does not have access to enough plantation wood to supply its pulp mills in Sumatra with the fiber needed to operate at full capacity without either resuming deforestation — and reneging on its landmark Forest Conservation Policy — or importing additional supply from abroad at great cost, explained Lafcadio Cortesi, Asia director of the Rainforest Action Network (RAN) and one of the report’s co-authors.

“We’re concerned that the new mill will create added pressure to maintain and expand the system of industrial agriculture on drained peatlands that caused Indonesia’s devastating fires last year,” Cortesi told Mongabay. “The economics and imperative to feed the pulp mill may also force APP to choose whether it will go back to using rainforest fiber or fail to pay back its debt.”

The paper company dismissed the concerns in a statement sent to Mongabay, explaining that the OKI mill will only increase its capacity when APP is able to secure enough raw materials from its suppliers. APP said the construction of the OKI mill was part of its plan to “increase our production capacity responsibility, which is essential for us to continue meeting growing market demands and further strengthen Indonesia’s contribution to global trade.” Its suppliers would continue to be bound by the same no-deforestation commitments detailed in APP’s Forest Conservation Policy — which bans the use of existing tropical hardwood in its supply chain.

But the report shows significant shortfalls in fiber supplies once the OKI mill begins operations. The company said it would prioritize fiber sourced from its plantations in South Sumatra in order to keep transportation costs low, according to the report. Sinar Mas Group, which owns APP, owns or has contracts with 33 pulpwood suppliers that together operate concessions that are 36 times the size of Singapore. But its South Sumatra plantations are hamstrung by pests and disease, as well as the constraints of APP’s own FCP commitments.

The company’s suppliers have only been able to develop 42% of the 789,043 hectares of concessions granted in South Sumatra while an additional 206,956 hectares of forested land that could be used for new development has been placed off-limits by APP until the conclusion of High Conservation Value (HVC) and High Carbon Stock (HCS) assessments. The company barred its suppliers from cutting HCV and HCS forests under its no-deforestation pledge.

With pulpwood from APP’s suppliers in South Sumatra already being sent to the companies’ existing mills in other provinces, environmental groups are questioning how South Sumatra’s plantations can support a new mill expected to eventually produce 2.8 million tons of pulp a year.

“That is where the big question comes from…this new mill is almost double [the capacity], where are you going to get your timber from?”

APP said it would work to increase productivity and yields at its plantations by reducing the impact of pests and disease and using modern harvesting techniques to cut waste. The company is also looking into identifying new pulpwood species that could produce greater yields and working with local communities to reduce the risk of future forest fires — which burned through much of its plantation stock last year.

If the paper giant is still unable to produce the quantities of pulpwood needed to allow the OKI mill to operate at full capacity, APP said it would import woodchips from abroad.

“Whilst the new mill at OKI significantly increases APP’s production capacity, we have been clear that our FCP commitment takes precedence over maximizing our production,” the company said. “The bottom line is that there is no question in our minds that the commitments we made in the FCP come first. The OKI mill entering into production will not affect our commitment.”

In 2013, APP commissioned forestry consultants Ata Marie and The Forest Trust (TFT) to conduct an independent study that examined its wood supply through the year 2020. The paper giant has repeatedly pointed to the survey’s findings as evidence that its supply remains sufficient to meet demand despite the impacts of its sustainability commitment and the new mill.

But environmental organizations have questioned the independence and scope of the survey as far back as 2015, when the Rainforest Alliance, an international nonprofit, claimed to uncover flaws in the study’s methodology. In the NGO’s view, Ata Marie and TFT had relied unconvincingly on data provided by APP and flyovers of select planted areas to reach their findings, which were never made public by the company.

“APP has failed to disclose many essential details about its future wood supply despite its claims of ‘unprecedented transparency’,” according to the latest report. “Instead, the company has offered blanket assurances that its suppliers will produce sufficient volumes of plantation-grown wood to meet the group’s long-term fiber needs and maintain its sustainability commitments.”

The TFT/Ata Marie study determined that APP had access to enough wood between 2013 and 2014 to keep three mills operating at 100% capacity. Since the study was released, forest and peatland fires burned through 26% of the plantations that are expected to feed the OKI mill, according to independent estimates. And the TFT/Ata Marie analysis only covers the first four years of operations at the OKI mill, with the study’s term ending only four years after the mill starts operating. 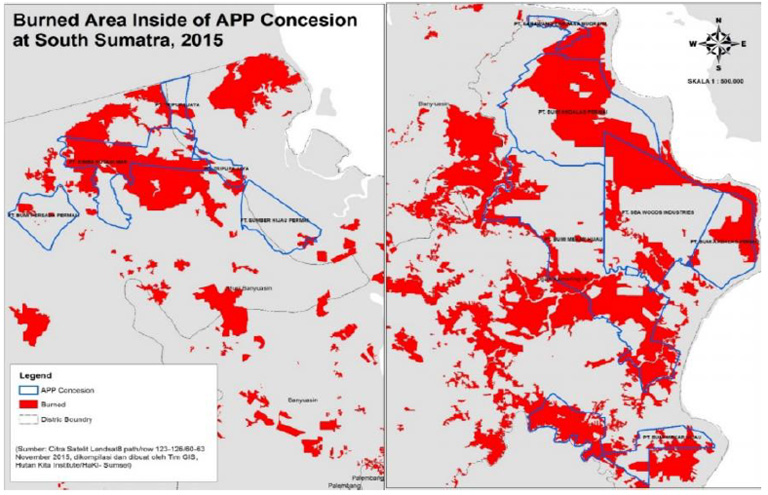 The mill is being financed by $2.5 billion in high-profile loans from Chinese state-owned banks. The funds, approved during separate visits by then president Susilo Bambang Yudhoyono and his successor, Joko Widodo, will cover 70% of initial build-out costs incurred by PT OKI Pulp & Paper Mills. The Indonesian government itself extended the company a 10-year tax holiday under a program that sweetens the deal for investors. PT OKI Pulp & Paper Mills will pay no taxes for eight years, and 50% for the remaining two years.

The decision to take on billions of dollars in debt to build what will become Asia’s third-largest pulp mill in a part of Indonesia without access to the volumes of wood needed to keep it profitable has left environmental groups like WWF-Indonesia concerned. While the organization doesn’t believe APP is actively looking to violate its FCP commitments today, it’s easy to envision a potential future where the company either needs to decide whether to resume cutting natural rainforest or potentially take a financial loss, Bayunanda explained.

Bayunanda still sees some positive aspects to the OKI mill. With the Indonesian market for pulp and paper saturated by the heavy output of mills run by both APP and its competitor, Asia Pacific Resources International Holdings Ltd (APRIL), the new mill’s products will likely be sent abroad to markets like the U.S., where APP has, in the past, been hurt by negative campaigning by Greenpeace over destructive practices in Indonesia. The paper giant needs to tread carefully to maintain buyers’ trust in Western markets, he explained.

“I am actually betting that they will have to keep to their pledge,” Bayunanda said. “If they break the pledge they will lose all of the buyers who are beginning to trickle in and they will lose their trust for several years. Where will all that paper and pulp go then?”

*An earlier version of this article mischaracterized as fact the report’s assumption that the OKI mill would begin to operate at full capacity in 2019. APP has not stated how its capacity will be ramped up. The article also said the new mill would effectively triple demand for plantation pulpwood in South Sumatra, when in fact there has been no demand for pulpwood in the province. Finally, it incorrectly calculated that the mill would require triple the fiber its plantations in South Sumatra have produced in the past.