Christmas is the toughest season for the pinabete. This pine tree is native to the Guatemalan sierras, as its scientific name implies: abies guatemalensis Rehder. However, for the past sixty years, its name is commonly associated with being the main decoration — and aroma — of Guatemala’s holiday season.

A pinabete that is 6.5 feet tall can cost a lot less than a plastic tree made in China: around $15. It has been cut down so extensively, that the Convention on International Trade in Endangered Species of Wild Fauna and Flora, or CITES, has placed it in its list of species at risk of extinction.

It’s virtually impossible to find a specimen that is as high as 130 feet, because every December, the trees’ top branches are cut down to be made into Christmas ornaments. Research conducted by the University of San Carlos de Guatemala estimates that this tradition was brought from Germany around 1950. Since then, demand for the tree has grown so much that an average 100,000 trees are cut down a year throughout Guatemala.

In 1979, pinabetes occupied an area of 274 square miles. In 1999, that went down to 151; today, it’s estimated to be only 96 square miles. Guatemala’s government has been trying to slow its destruction but to no avail. A few weeks ago, police confiscated a truck full of pinabete worth upwards of $76,000. The shipment was headed to Guatemala City, Central America’s largest city with a population of four million.

The old habitat of pinabetes extended across all of Guatemala’s mountain ranges and into El Salvador and Honduras a century ago. Today, much of it is in the hands of poor Mayan communities. They call the tree “tzin´chaj” or “pashaque”; using it mostly as firewood or to decorate their temples.

Currently, offers them an incentive: $2,400 for every hectare that’s reforested over six years, and $3,300 when reforested over a decade. The Swiss NGO, Helvetas, has committed to reforesting ten hectares a year in poor communities in Quetzaltenango. Plantations are increasing in size, but the natural forest isn’t being restored; it is reducing exponentially due to indiscriminate logging.

Salvador Pira, the owner of Chichavac farm says the smell of the pinabete tree is the main reason why it’s in such high demand. Photo by Carlos Chávez.

An association of pinabete growers

Chichavac is a pinabete farm in western Guatemala with 120,000 trees — the largest in the country. Its owner is Salvador Pira, the head of the National Association of Pinabete Growers of Guatemala (Anpropigua), which includes more than 250 growers. Pira isn’t Maya, but most of the other members are, he says.

Salvador Pira charges around $100 for a seven foot-high pinabete tree; six times more than an “illegal” tree would cost in a market.

“We’ve tried to pin down an attractive price so that people here grow it instead of cutting it down. If the price goes down, so will the incentive,” explains Pira.

His pinabetes are more expensive because they’re very demanding: they must grow between 8,000 and 12,500 feet, as long as it’s humid and the temperatures oscillate between 35 and 50 degrees Fahrenheit. Only 12% of the pinabete tree’s seeds germinate.

Pira says he believes that his pinabetes have led to Guatemala importing fewer real Christmas trees from the U.S. and Canada.

However, just a few miles down the road from his farm, there is proof to the contrary. Along the Interamerican Highway, a handful of Mayan peasants —who asked to remain nameless— offered pinabete crowns for $3 each.

“We are poor. We don’t have enough land to grow pinabetes, and we need some money to get us into the new year,” said one of the peasants. He recognized that there is a stiff penalty associated with selling illegally cut pinabete — a sentence between five and ten years in prison — and a fine of around $ 2,000.

The destruction of pinabete trees is accelerating. And this year it broke a record: more than 130,000 trees were seized on the first eight days of December. That’s 12 times more than in 2012.

Eric Alvarado, forest consultant with Guatemala’s National Council of Protected Areas (CONAP) says that the agency’s 450 environmental police officers are not enough. “We require at least 1,000 more agents to monitor the forests, because when we confiscate the trees along the road, there’s nothing we can do to prevent the problem,” he says.

A market of illegal pinabetes

Many Guatemalan environmentalists don’t understand how the CONAP can allow Guatemala City’s Christmas market to thrive. About a half block away, four agents from the Nature Protection Division —Diprona— fail to explain why they allow the sale of illegal pinabetes.

“We only check for people transporting large amounts of pinabete,” said one of them when asked.

For the Anpropigua pinabete growers association, this market simbolizes “the lack of willingness to attack the illegal trade.” A few months ago, Diprona inspector Álvaro Rossell Mérida Natareno publicly denounced this enforcement agency as corrupt and as having made deals with various illegal pinabete associations.

As of today, Guatemala’s government has not announced any plans to change its pinabete conservation strategy. Experts say that by December they expect more of the same: some seizures of illegal trees, the promotion of pinabete plantations, and a blind eye towards the Christmas fair in Guatemala City, where pinabetes are selling for around $15. 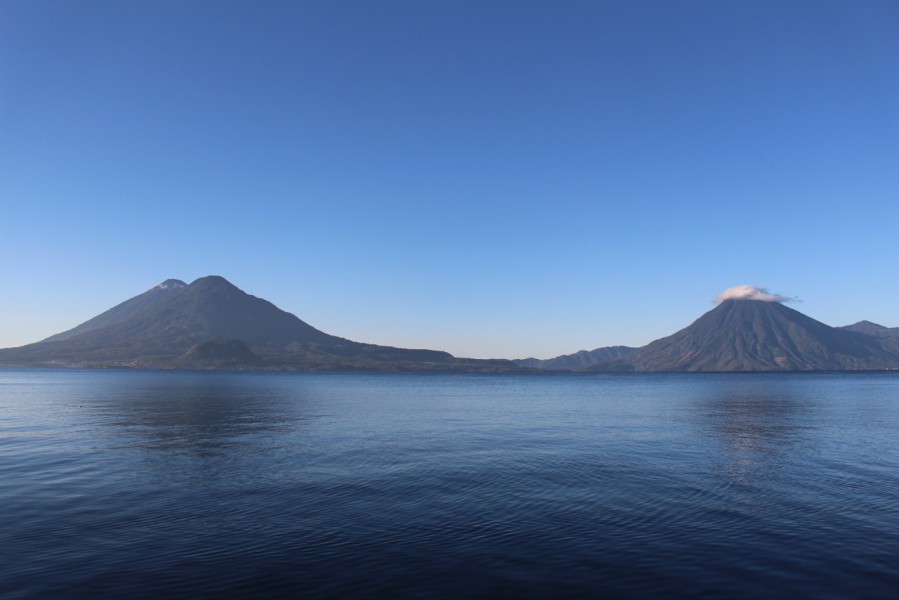 The soil and humidity of many of Guatemala’s volcanoes are the ideal habitat for the pinabete. Photo by Carlos Chávez.