The Holy Trinity: how Wakatobi’s coral stays healthy and diverse

A soon-to-be under-resourced national park administration is fighting to protect marine life along one of Indonesia’s most diverse coastlines. by Melati Kaye on 16 November 2015

This is the first story in a three-part series exploring changes in Indonesia’s network of marine protected areas through the lens of Wakatobi National Park. Read the second story here.

In 2006, then Indonesian President Susilo Bambang Yudhoyono made an ambitious promise to conserve a “global epicenter of marine life abundance and diversity.” Indonesia would preserve 10 million hectares (38,610 square miles) of ocean lying in the Coral Triangle, Yudhoyono said at the landmark UN Convention on Biological Diversity in Rio di Janeiro. Three years later, he doubled Indonesia’s commitment, vowing to preserve 20 million hectares of ocean by 2020.

The Coral Triangle, in the western Pacific Ocean waters of six countries, is home to 76 percent of the world’s coral species and over a third of all reef fish species. If Indonesia makes good on its pledge, a sizable portion of global marine biodiversity will be preserved; and carbon dioxide absorbing waters and coral will be better protected.

With less than five years to go to Indonesia’s 2020 goal, Mongabay is providing an update on Indonesia’s progress with a three-part series focused on Wakatobi, a world-renowned diving destination off the tip of southeast Sulawesi that is also one of Indonesia’s oldest and best-supported marine protected areas (MPA).

Indonesia has already declared 16.6 million of its targeted 20 million hectares of MPAs, or designated patches of ocean where fishing is prohibited or restricted for the benefit of local sea life. But most of these declared MPAs are in nascent stages and have yet to even be zoned.

In contrast, the 1.39 million hectare Wakatobi National Park was established and therefore designated a protected area in 1998. It was zoned in 2007, initially with a little under 44,000 hectares of no-take zones. International NGOs, namely the World Wildlife Fund (WWF) and The Nature Conservancy (TNC), have worked with local partners to bolster monitoring and management practices, to great success. The MPA experience in Wakatobi, therefore, is helpful for both understanding what successful MPA management looks like; what dilemmas good managers still need to weigh; and examines the sustainability of an MPA once international conservation partners leave.

This first part looks at the ecology of Wakatobi and delineates the importance of setting aside such marine preserves.

Flying into Wakatobi’s single runway airport on the island of Wangi Wangi, a visitor might flip through inflight magazine photos of shimmering aquamarine waters and neon-colored fish fluttering into coral hideouts. These scenes are abundant throughout Wakatobi’s four main islands and numerous smaller ones. But many forget that mangroves and seagrass are equally important parts of the “holy trinity” supporting the high amount of biodiversity here and in other tropical marine environments.

No one knows this better than British University of Portsmouth researcher Ian Hendy, who has been researching Wakatobi’s mangroves for the last 10 years.

Mangrove prop roots act as sieves, Hendy explained when Mongabay interviewed him in Wakatobi in September. They hold back sediment that would otherwise muddy coastal waters and prevent sunlight, necessary for photosynthesis in seagrass and coral, from streaming through.

Returning to one of his long-term study sites on Kaledupa Island, Hendy shook his head at the destruction he observed. In the past three years, he estimated, 15 percent of the island’s mangrove forest had been destroyed by local community members seeking firewood and construction materials. Survey data collected by the national park, in coordination with NGOs, show that 78 percent of Wakatobi’s mangrove cover is located on Kaledupa. The survey team also noted that mangrove forest on all of Wakatobi’s islands thinned between 2008 and 2010.

For Hendy, such mangrove destruction foretells a doomed future for the nearby coral reefs and their inhabitants. “Get rid of the mangroves and you lose nursery habitat,” Hendy said. His research shows that a surprising number of animals living in coral reefs spend their infancy and adolescence in mangroves and seagrass beds.

“Snapper, moray eels, trigger fish, even octopuses – you go into mangroves and you find them in these pieces of burrowed out, waterlogged, old wood,” he said. “That wood is their nursery habitat.”

Near Hendy’s mangrove sites, Indonesian Institute of Sciences ecologist Andri Irawan measured seagrass cover in the shallows of Hoga Island. Irawan is still processing his research results from transects on all of the national park’s islands so he could not comment on the current state of seagrass bed health in Wakatobi. But the young researcher did emphasize the importance of monitoring seagrass in general.

“Seagrass beds are a huge source of protein for seaside communities,” Irawan explained as he waded through chest-deep waters to his next survey quadrant. “They glean the beds for sea cucumbers and shellfish at low tide, especially during full moon nights.

“If marinas and river dredging and other building development is done without considering environmental factors, the seagrass ecosystem will be the first to go [and nearby coral without a buffer might die too].” 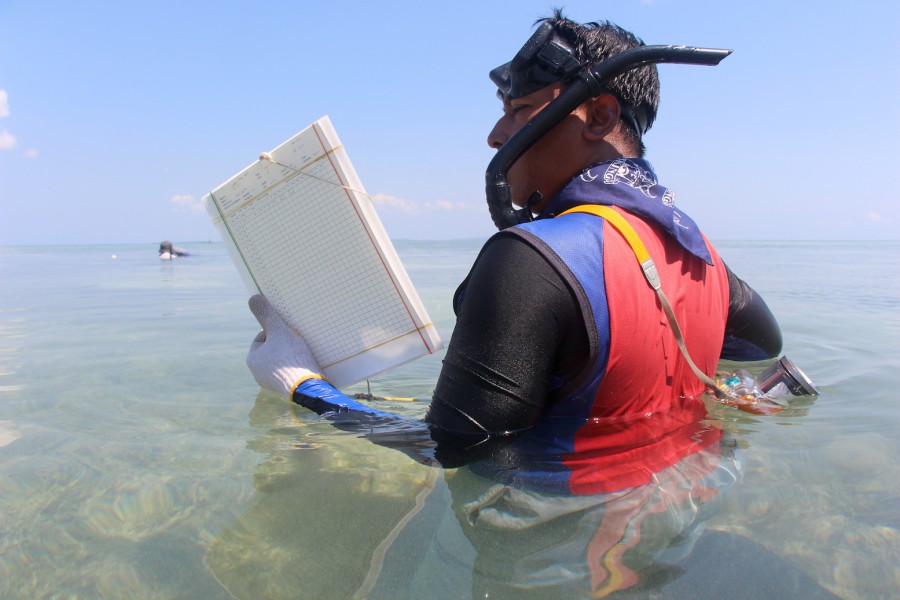 Irawan and Hendy’s observations are disconcerting because there is a lot to be lost along Wakatobi’s diverse coastline. There are 396 identified species of coral, 590 species of fish and 11 of the 12 species of seagrass endemic to Indonesia, according to 2008-2010 park survey data. And despite three fifths of the park’s coral reef showing signs of bleaching in 2010, all of the reef walls got healthy again.

However, last year, TNC ended its partnership with Wakatobi, and the WWF scaled back, raising questions about the long-term viability of the national park. The second piece in this series looks at how the park is coping with the drop in seed money and a changing management regime.

Also, Wakatobi’s holy trinity sustains not just a panoply of sea creatures. Living within park boundaries is a population of around 95,000 humans living in fishing communities, akin to coastal villages found in every cranny of Indonesia’s 17,000-island archipelago. And these people – unlike the moray eels, octopi, triggerfish, and coral polyps – vote, lobby officialdom and trade in Asia’s overheated commodity and seafood markets. The third piece looks at the difficulties of monitoring a vast but inhabited national park and a new initiative to involve local communities in management.

The success of Indonesia’s bold commitment to marine conservation depends, in large part, on the way Wakatobi’s MPA system goes. Is the conservation initiative moving toward sustainable footing, or will it go the way of many conservation projects before it that peter out when the initial enthusiasm and funding ends?