Not only are the world’s forests valuable carbon sinks, but deforestation and forest degradation are responsible for about 10 to 15 percent of global carbon emissions every year.

In other words, we cannot address climate change without reducing emissions from deforestation and the degradation of what’s left of the world’s forests.

A new analysis released ahead of climate treaty negotiations to be held in Paris in just a few weeks shows that significant progress is being made via the UN’s Reducing Emissions from Deforestation and Forest Degradation (REDD+) program, but that it’s crucial for rich nations, which bear an overwhelming share of the responsibility for creating the climate crisis in the first place, to make more ambitious commitments in order to build on that momentum.

Disbursements of funds to tropical forest countries steadily increased from 2009 to 2014, according to researchers at Washington, D.C.-based non-profit Forest Trends.

The researchers tracked $6 billion of the $10 billion that has been pledged under REDD+ programs (a pledge is a non-binding promise to deliver funds) and found that some $3.7 billion has already been committed to 13 countries that account for some 65 percent of the globe’s tropical forest cover (pledges turn into “commitments” when the donor country and the recipient country have formally signed an agreement). 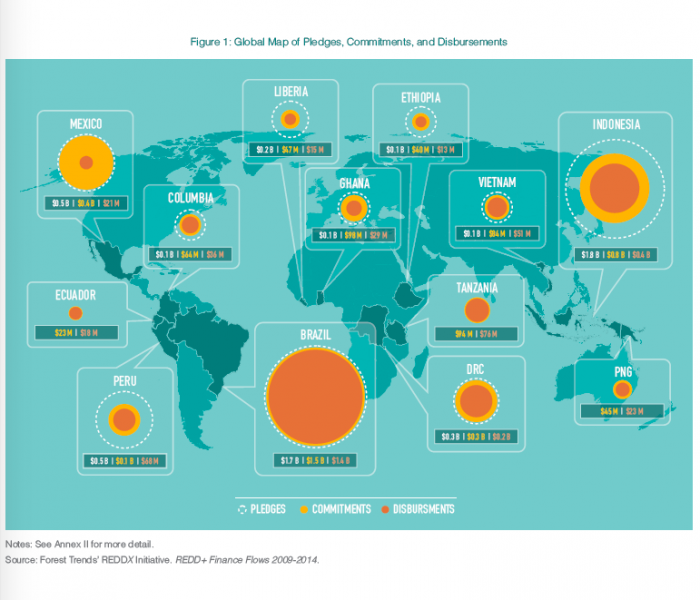 Individual countries have been the primary source of those funds, to the tune of some $2.2 billion, with Norway alone providing half of that amount, the analysis says. Brazil and Indonesia were the biggest recipients, receiving nearly two-thirds of all funds pledged or committed.

Meanwhile, nearly $400 million of the $3.7 billion in committed funds came in the form of payments for verified emissions reductions purchased as offsets on voluntary carbon markets. Forest Trends’ analysis supports other research that has shown that international forest carbon financing is increasingly moving towards these kinds of payments for tangible results as opposed to being used for readiness measures to help forest countries prepare for participation in programs like REDD+.

By the end of 2014, the Forest Trends analysis found, some 62 percent of all committed funds had been disbursed, primarily to implementing agencies and other beneficiaries in the recipient country. But while disbursements of REDD+ funds to individual countries varied widely, from more than 90% of committed funds already having been disbursed in Brazil to less than 10 percent disbursed in Mexico, Forest Trend’s Jessica Breitfeller, one of the authors of the analysis, told Mongabay that she was somewhat surprised at how high disbursement rates were overall.

“Disbursement rates are relatively high,” Breitfeller said, noting that nine of the 13 countries the team tracked have received 50 percent or greater of committed funds, which she found surprising because there was a lot of early skepticism that REDD+ finance would actually flow to countries. 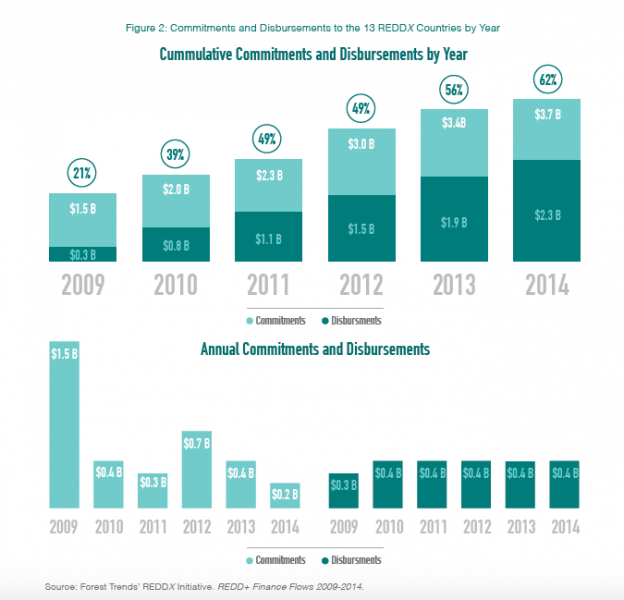 While there are undeniably successes that can be built on in Paris, Breitfeller and team say that their study also shows that major challenges remain for REDD+.

At least $20 billion will be needed per year to cut deforestation in half by 2020, for instance, but total global pledges so far top out at about $10 billion, Forest Trend’s Brian Schaap, a co-author of the report, told Mongabay. “A lot more finance is needed to make significant emissions reductions at the scale that’s needed,” he said. “Uncertainty about future financing is a big hindrance to successful expansion of REDD.”

The Forest Trends researchers make other recommendations for areas Paris negotiators should focus on. They call for greater coordination between donor and recipient countries to minimize duplicated efforts, for instance. And they say governments of countries receiving funds should incorporate REDD+ strategies into overall development planning. To that end, Schaap said, it’s imperative for negotiators in Paris to enable countries to use REDD+ in their climate commitments.

It’s also crucial to more fully engage the private sector in national REDD+ planning and implementation processes, the researchers write. So far, the public sector has been the only source of funds at a large enough scale to get REDD+ programs off the ground. In order for REDD+ to succeed over the long-term, however, much greater investment will be necessary from the private sector.

There are ways negotiators in Paris could help spur this private sector investment. The researchers write in the report that “The inclusion of REDD+ as a means for achieving emissions reductions goals within the Paris Agreement, coupled with robust national emissions reductions targets and domestic regulation of carbon markets that allow for international offsets, would be important policy signals to unlock a new wave of private sector finance.”