After the NGOs: can Wakatobi National Park survive on its own?

With NGO funding for one of Indonesia’s best-run marine protected areas winding down, experts are wondering whether local authorities have the resources to keep excelling at their jobs. by Melati Kaye on 18 November 2015

This is the second story in a three-part series exploring changes in Indonesia’s network of marine protected areas through the lens of Wakatobi National Park. Read the first one here.

6am, Waha shore of Wanci Island, Wakatobi National Park, Indonesia. There’s a feeding frenzy 100 meters offshore. A pod of 30-some dolphins are hunting baitfish. And cutting quick, tight circles around the group are 20 fishermen in motorboats.

They’re towing handheld fishing lines near the dolphins in hopes of landing yellowfin tuna (Thunnus albacares), which are often found feeding with dolphins in Southeast Asia. The point of the handline exercise is to land the high-value tuna without ensnaring dolphins and other protected species as “bycatch” in indiscriminate netting operations. A national park guard boat, the M/V Songampa, hovers nearby to monitor compliance.

“Duck,” yells a national park guard, as a wooden tuna lure fashioned to replicate a flying fish swings through the air above the Songampa’s cabin, buoyed high by a paper kite. A menacing treble hook dangles from its dummy fish stomach. Seven of the eight crewmen aboard the single-engine, fiberglass patrol boat scramble for cover. Only patrolman Syaruddin remains unruffled on deck, hunched over his clipboard filling out an elaborate statistical form. His task, the main impetus for this raucous dawn excursion, is too important to interrupt. 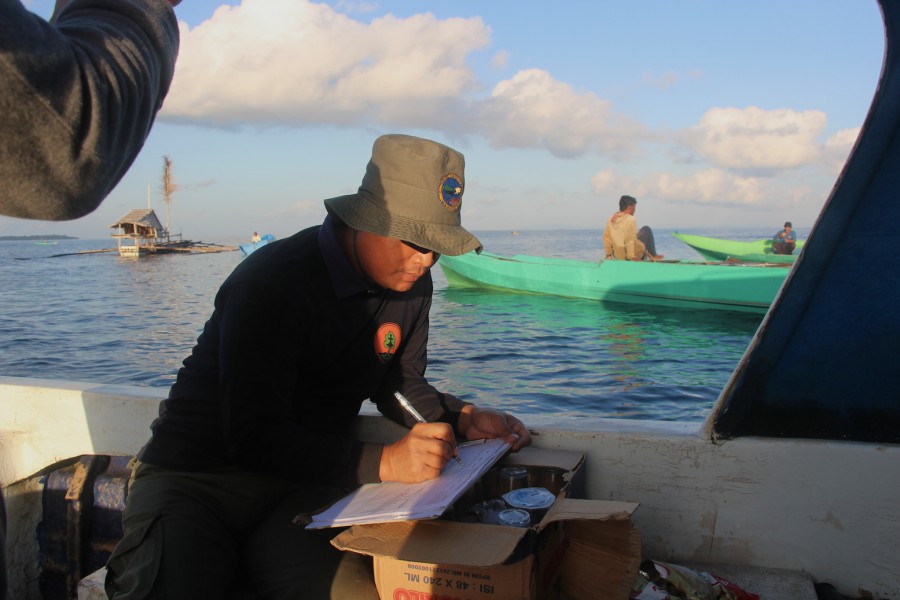 Syaruddin is tabulating 14 data points concerning local communities’ use of marine resources. Such surveys are conducted six times a year on field monitoring trips like this one. Designed by the national park, in collaboration with The Nature Conservancy (TNC) and the World Wildlife Fund (WWF), this form is arguably what makes Wakatobi a model marine protected area (MPA) for Indonesia. As such, it offers “a national model for ecological and biological monitoring,” according to WWF Fishery Program head Imam Zainuddin.

The third largest of Indonesia’s 23 national marine parks, Wakatobi is a trailblazer: the first to be zoned with demarcated “no-take” areas off limits to fishing. The form Syaruddin is filling out offers a bimonthly snapshot of where, outside the no-take zones, local fishermen are still fishing, what they are catching and what kind of gear they are using.

Not only does this data provide a barometer for the health of the ecosystem; it also forces park guards to overcome bureaucratic inertia and actually get out and monitor how the park is being used, a practice done more sporadically at other national parks in Indonesia. Both the fishery ministry and the forestry ministry have adapted the Wakatobi forms for their own monitoring programs, suggesting their approval of the system developed in the park.

Park guards and local community groups together received over five years of training to incorporate this monitoring data into park management systems. As a result of this joint training, local Wakatobi communities, relative to other Indonesian MPA denizens, feel more invested in park management and zoning. Community organizations from the park’s four main islands participate in individual park guard-led initiatives. One group, Komunto, even won the UNDP Equator Prize for its maintenance of a local fish bank.

It helps, of course, to have the support of the local district head, or regent, a colonial-legacy position in Indonesia that has the duties of a county official but garners the respect of a tribal headman. Wakatobi’s regent, Hugua, comes from one of the park’s four main islands and is firmly behind the current MPA management system, according to Songampa crewman Ayub Pollii. Other MPAs, such as Togean Islands National Park, are not so lucky, he added. Where MPA managers are at odds with a regent, it can “make the national park’s work really hard.”

Hugua, for his part, depicts his cooperation as a matter of simple pragmatism. “NGOs come to Wakatobi because of the national park and the biodiversity here,” he explained to Mongabay at a ceremony on Wanci Island. “They offer expertise. I don’t have the budget to pay experts to come and patiently work with local communities, so I work together with [the park and the NGOs].”

Not that the process has been entirely conflict-free even in Wakatobi. WWF and TNC scientists, working through the World Bank’s Coral Reef Rehabilitation and Management Program-Coral Triangle Initiative (COREMAP-CTI), helped park authorities zone Wakatobi’s 1.39 million hectares in 2007 based on their relative importance to the area’s marine biodiversity. But fishermen, particularly from the local Bajau sea gypsy community, were leery of the scheme, according to community leader Abdul Manan. “They demonstrated,” he related, “asking, ‘If I don’t take from the no-take zones, where am I supposed to fish?’”

It fell to Manan, a rare university-educated sea gypsy and the self-styled “president of the Bajau,” to explain that, aside from the no-take zones, the rest of the MPA would still be open to the community for regulated fishing. Though they make up less than a third of its population, the Bajau comprise a major part of Wakatobi’s fishing population.

But Manan’s solution – to declare all Wakatobi waters except the park’s core no-take zones open to fishing – was, arguably, more than just a matter of messaging. It amounted to a dilution of the initial zoning guidelines, some NGOs feel, which undermines the whole point of zoning in the first place. Only 1,300 hectares of the 1.39 million hectare national park are designated as ”core” no-take, no-go zones. Initially 42,630 hectares of “tourist” and ”marine” zones were also supposed to be regulated as no-take zones.

The effectiveness of any regulatory regime depends, of course, on its implementation. Whenever park patrol pulls up to a fishing fleet, guards routinely ask, “What’s biting?” Always the answer is “kosong sama sekali,” meaning, basically, “zip” or “nada.” But, just as routinely, a closer inspection around the palm leaf fishing buoys will tell a different story. All the more reason for frequent forays like the Songampa’s this morning.

The continuity of such fact-finding field trips is now at risk as NGO seed funding runs out for the Wakatobi MPA. In 2014, TNC wound up its involvement with the park and the WWF decreased its funding on the premise that Wakatobi already has in place a mature management system.

Until 2014, that system included a 20-day-per-month schedule of field monitoring for each park guard. In addition to checking up on fishing fleet catches, they used to keep track of things like the health of coral walls, seagrass beds and coastal mangroves; the park’s dolphin census; and reef-fish spawning aggregations. Now, park guards monitor fishermen and dolphins just six times a year, and have reduced all other monitoring to only two times a year.

“It costs a few hundred thousand rupiah [$20-30] just to run the boat for a morning,” laments Ayub Pollii, the Songampa crewman. “We just can’t afford to patrol every day.”

But neither can the park afford to dial too far back on its patrols, said the WWF’s Zainuddin. Wakatobi and its park guards lead the nation in terms of natural resource monitoring capabilities. But unused skills get rusty, which would amount to a squandering of the seed investment by groups like the World Bank and the WWF.

For example, fish spawning aggregation counts require laser-equipped monitors to dive and observe fish numbers and size. Spawning events – when commercially valuable reef fish species like groupers, snappers and coral trout gather in the tens to hundreds to mate – are very predictable, happening nightly in the same place in the run-up to each new moon or full moon. This makes the events prime occasions for MPA managers to assess population numbers. But, if left unmonitored, the gatherings could just as easily become prime occasions for fishermen to harvest these fish, possibly using such illegal (but efficacious) means as coral-killing, fish-stunning potassium cyanide.

Nor is the drop in funding the only threat to the park’s ongoing management program. In December, local elections will determine Wakatobi’s next regent; will he be as supportive as the current one? And national legislation was introduced last month to reallocate the park’s oversight and budgeting authority from the regency to the provincial level. That could mean that development agencies or researchers seeking permits to work in the MPA, as well as park officials seeking budgetary allocations, will need to take a one-hour flight or a nine-hour ferry trip to the provincial capital for approvals.

What’s more, there are also plans to shift administration of 4.7 million hectares of MPAs from their current bureaucratic niche under the forestry ministry over to the fishery ministry. Intuitively logical as this may seem, NGOs aren’t looking forward to the change.

“The MPAs under the ministry of forestry have improved a lot over the last 10 years,” said Stuart Campbell, head of the Wildlife Conservation Society’s Indonesian marine programs and an architect of the zoning and regulation of northern Java’s (much smaller) marine Karimunjawa National Park. “These MPAs operate pretty much the way you’d expect a national park to operate. There are ranger units. They have had a long time to develop, with lots of NGO support in capacity building and funding.”

But after the switch of national oversight to the fishery ministry and administrative supervision to the provincial level, Campbell worries that some of the “institutional memory” of operating such a national park will need to be rebuilt.

Pulau Kapoposang, the 5,000 hectare marine national park in the outer reaches of South Sulawesi’s Spermonde island group, was caught in such a limbo. In 2009, it was redesignated to the fishery ministry’s watch but no new park management took up station at the island until 2014, leaving the park open to coral bombers and skin divers hunting groupers with potassium cyanide.

The WWF’s Zainuddin is more sanguine. Maybe, he ventures to hope, with the switchover to fishery ministry oversight, MPAs like Wakatobi in Sulawesi or Raja Ampat in Papua or Komodo in Flores will be able to focus more on fisheries management. Previously, under the forestry ministry, the emphasis was on “biodiversity and zonation,” he said. “The forestry ministry did allocate certain no-take zones for fisheries, but a lot of those zones were chosen just because there was no conflict over that patch, rather than on the basis of science.”

Science, of course, begins with data, and the crew back aboard the Songampa is doing its best to keep the MPA’s database up to date despite funding cutbacks and bureaucratic realignments. Dolphins pass nearby, cheering them on with high-pitched cries, their sleek grey sheen matching the dawn shimmer of the surrounding sea.