The last few months have been busy on a cacao plantation in northern Peru, where, despite a nine-month legal suspension of farming activities, satellite imagery shows that United Cacao’s subsidiary has notched up forest clearing since June 2015.

The Monitoring of the Andean Amazon Project, or MAAP, released two sets of images this week revealing the removal of 126 hectares of forest in the past two months from the company’s property, where crews are developing a plantation to grow the raw material used in chocolate. The uptick follows seven months of relative inactivity on the plantation, during which only 24 hectares of forest was cleared.

Despite the suspension levied against the company in December 2014 because the Ministry of Agriculture said the company lacked the proper environmental studies, United Cacao says it’s operating within Peruvian law. And CEO Dennis Melka has told the press that plans for further expansion are underway.

But that behavior has drawn criticism from scientists and conservation NGOs concerned about the conversion of Amazonian forest to agriculture.

“These people are consistently violating the law and ignoring the authorities,” said Julia Urrunaga, director of Peru programs at the Environmental Investigation Agency (EIA). Urrunaga has investigated Melka’s interests in Peru extensively and was the lead author of a report on the threat to Peru’s rainforests from large-scale agriculture.

Scientists from the U.S.-based Amazon Conservation Association and the Peru-based Asociación para la Conservación de la Cuenca Amazónica based in Peru first provided a window into the efforts of United Cacao and its subsidiary in Peru, Cacao del Peru Norte. Their analysis demonstrated that between May 2013 and August 2014, the company cleared more than 2,100 hectares, about 98 percent of which was primary, closed-canopy rainforest.

Further confirmation of the forest’s value came from ecologists at the Carnegie Airborne Observatory at Stanford University who had previously teamed up with Peru’s Ministry of the Environment to use satellite and airborne images to determine a forest’s chemical makeup. They confirmed that United Cacao’s plantation near Tamshiyacu on a major tributary of the Amazon had held dense, carbon-rich jungle prior to the company’s arrival.

Maps from Global Forest Watch also show that the area held an unbroken track of rainforest as recently as 2013. Then, through 2014, data from NASA satellites show the rapid loss of tree cover on the cacao plantation.

In addition to the standard Landsat images at 30-meter resolution, the MAAP team included pictures from late-generation WorldView satellites with a resolution of one-half meter or less. At this level of clarity, the canopy on the plantation in June – and the felled trees in August – are visible to the naked eye. 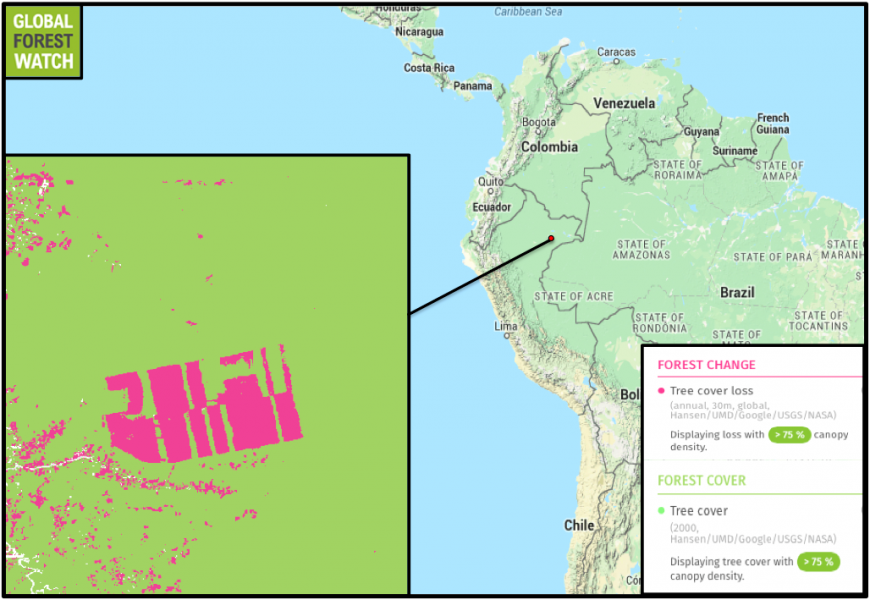 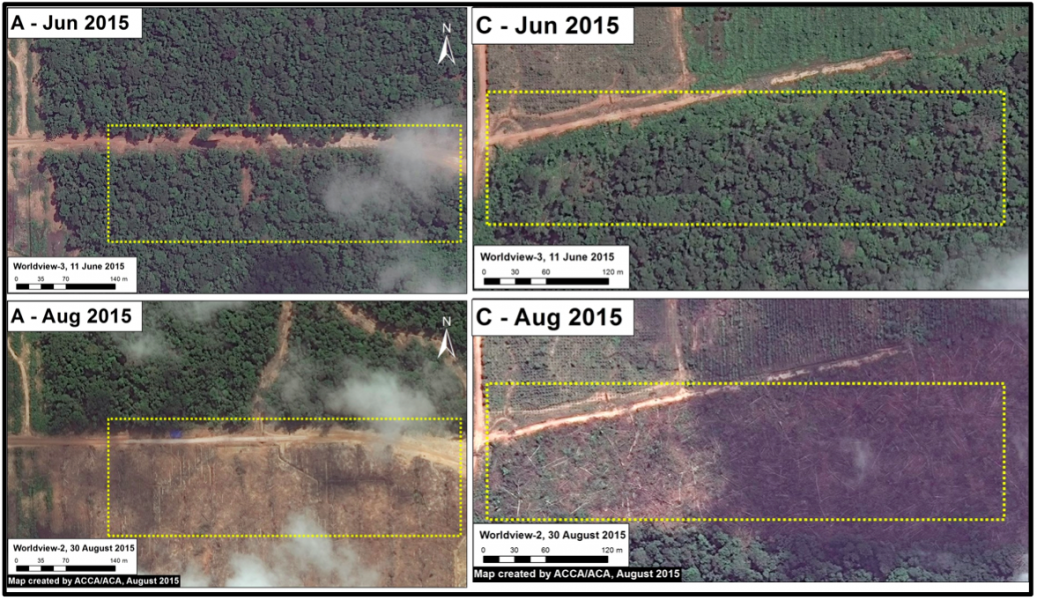 MAAP suggests that this type of clearing, as well as what the project has documented previously, is evidence that United Cacao CEO Dennis Melka has brought to Peru the large-scale, monoculture approach to agriculture common in Southeast Asia, where he began his career as an entrepreneur.

In fact, Melka said exactly that. “What we’ve done is we’ve taken the agro-industrial model of planation, which is very common out here in Southeast Asia, and applied it in what we feel is the lowest-cost location on earth to plant,” Melka told The Edge Singapore, a business publication.

According the authors of the MAAP post, this approach will also fundamentally transform cacao agriculture in South America: “In other words it is changing cacao production in Peru from the traditional small-scale model sited on long-deforested land for the agro-industrial model that requires large land parcels that are normally occupied by forests.”

Melka and his backers don’t plan to stop at the nearly 2,300 hectares the company has already cleared. Currently, the world’s biggest cacao plantation is 3,000 hectares. “Our goal is to be larger than that — about 3,250 [hectares] by the end of 2016,” Melka told The Edge Singapore.

How the company plans to continue legally developing its plantations is not clear. The suspension of agricultural activities is still in effect, said Katherine Riquero, the director general of Agrarian Environmental Affairs at Peruvian Ministry of Agriculture, in an email to mongabay.com.

Yet the company insists it has the right to develop its land. In August, United Cacao released a presentation by attorney Roberto Tello that lays out the company’s legal defense based on a series of laws that, according to the company, had earmarked the land for agriculture. Thus, their development “is not deforestation,” writes Tello in the presentation.

Melka has declined repeated requests for an interview with mongabay.com through United Cacao’s public relations representative, Ed Portman. Portman, with the firm Tavistock in London, pointed to a court case in March 2015 that occurred in the region of Loreto, where the plantation sits. He contends that the ruling “totally validates” the company’s rights to the land.

But Julia Urrunaga of EIA said the March ruling was only meant to sort out a technicality regarding the people listed as the defendants in the case. She said its scope did not allow the judge to determine whether the company’s development of the land was legal. Nor did it resolve the case, a fact that Portman, on behalf of United Cacao, flatly disputes.

United Cacao has built the legitimacy of the plantation’s development around the argument that farmers had been working the land in contention since the late 1990s, and therefore, it wasn’t forest by the time United Cacao crews picked up their tools.

But the evidence says otherwise, Urrunaga said. “There is no room for confusion here. It is black and white, although they are doing all they can to make it look grey.

“Satellite imagery proves that the vast majority of the area was a natural forest (mostly primary) until the end of 2012,” she added. “The land was not deforested before Cacao del Peru Norte arrived.”