From the flukes of whales to the stripes of zebras, biologists use patterns to identify individual animals and monitor populations. But what do you do when you can’t see those patterns? Researchers with Rimba, a non-profit Malaysian research group, and James Cook University have figured out how – using just a simple camera hack. Their paper was published earlier this month in the Journal of Wildlife Management.

The discovery came about through work with leopards. The most wide-ranging of the big cats, leopards are found from Africa to Siberia to Southeast Asia. While the spotted, tawny color form is the most familiar, leopards exist in other morphs – notably an all-black variant. Sometimes referred to as “black panthers,” these melanistic leopards are primarily found on the slopes of some African mountains and in peninsular Malaysia. However, only in Malaysia are black panthers more common than their tawny counterparts.

“This is a completely unique phenomenon for leopards, and represents perhaps the only known example of a mammal with almost an entire population completely composed of the melanistic form of the species” says Laurie Hedges, lead author of the study.

However, study of black leopards has been made difficult because while they do have spots, they are largely invisible to the naked eye.

“Despite the uniqueness of this population, very little was known about leopards in Malaysia, until now. This is mainly because their uniformly black colouration prevented us from identifying individual animals and estimating their population sizes with conventional flash camera traps.” says Dr. Mark Rayan Darmaraj, who manages WWF-Malaysia’s tiger conservation project in the Belum-Temengor Forest Complex.

But the researchers noticed that spots could be seen on black leopards photographed at night by infrared cameras. But how do you trick an infrared flash to work during the day without spending lots of money and time redesigning it? With a bit of tape, it turns out.

“Many brands of camera traps use an infrared flash to illuminate their subjects. During the daytime, when no flash is used, the different leopard individuals are indistinguishable,” says Dr. Gopalasamy Reuben Clements, a co-author of the study based in James Cook University and Universiti Malaysia Terengganu. “However, at night, the characteristic spotted pattern of leopards can be seen on their coat. All we did was place a piece of sticky tack placed over the light sensor of the camera. This simple technique ‘tricks’ it into thinking that it is night and thus triggering the infrared flash.”

By using their tape trick to force the cameras into “night mode,” the researchers were able to identify 94 percent of the black leopards they observed. They hope that this technique will better allow study of Southeast Asia’s leopard populations, which some researchers worry are declining.

“Some places in Peninsular Malaysia where I have camera-trapped relatively abundant levels of prey and forest cover, alarmingly, turned up little or no evidence of leopards,” says Dr. Ahimsa Campos-Arceiz, an Associate Professor based at the University of Nottingham Malaysia Campus.

Many factors may be behind this decline, say the scientists. There is evidence that people are directly trapping and killing leopards, and local newspapers have shown carcasses with the telltale signs of snares. According to a Rimba press release, leopard body parts are showing up at illegal wildlife trading spots along the Myanmar-China border. Leopard habitat is also quickly disappearing as forests are cleared throughout Southeast Asia for roads, plantations, and other developments. The authors write in their study that Malaysia lost 14 percent of its tree cover from 2001 through 2012 (it should be noted that this represents both deforestation and the harvesting of tree plantations). 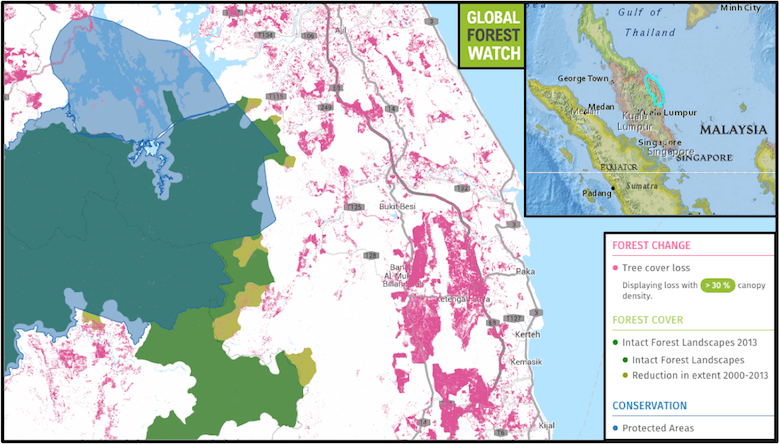 In order to gauge leopard status in Southeast Asia, researchers must first determine how many there are. Being able to identify individuals is crucial to this end, and now those studying black leopards in Malaysia are finally able to count their study subjects and get a handle on their population size.

“Understanding how well leopards are faring in human-dominated landscapes in Malaysia is vital. Currently we do not have an idea of their population size or trends,” said Dr. William Laurance, a co-author at James Cook University. “Ultimately, this novel technique can also benefit researchers in both Thailand and Java, where substantial numbers of melanistic leopards can be found in smaller proportions.”