Millions of dollars pumped into oil palm development in Tanzania

A partnership with foreign investors aims to scale up the East African nation’s production of palm oil, but details on its implementation and possible consequences remain scarce.

Plans for a 10,000-hectare oil palm project are underway in Tanzania, backed by a $111 million investment from a local industrialization organization and a foreign investment firm, reported the East African Business Times.

The National Development Corporation, or NDC, is spearheading what they’re calling the Integrated Oil Palm Project in the Ruvu River Basin near Tanzania’s commercial capital, Dar es Salaam. It’s the next step in a deal signed in 2013 with Nava Bharat, a venture capital firm based in Singapore. So far, the project has secured 6,000 hectares of the total project area.

NDC was formed by an act of parliament in the 1960s to “catalyze economic development” with the motto, “Join us in industrializing Tanzania.” The organization points to lucrative export markets hungry for palm oil in Europe and Asia. 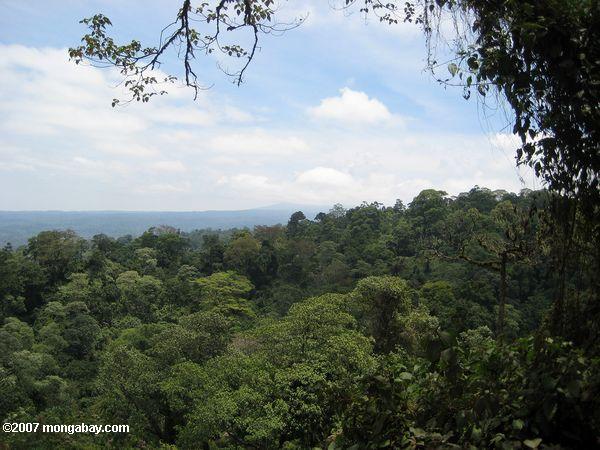 “Oil palm has been chosen as it is ideal for commercial agriculture thus supporting ‘Kilimo Kwanza’ campaigns,” according to the NDC website. “Kilimo Kwanza,” Swahili for “transforming agriculture” or “agriculture first,” is Tanzania’s campaign to advance the country’s agriculture sector, which is responsible for more than a quarter of the nation’s economy.

In the past decade, the Tanzanian Government has shown increasing interest in biofuels in general and oil palm specifically in an effort to steel its economy against the effects of rising fuel prices and help it move toward energy self sufficiency. The government set up a task force in 2006 to facilitate the growth of Tanzania into a biofuel- and palm oil-producing country.

NDC expects to get 7,250 liters, or between 7.7 and 7.9 metric tons, of palm oil annually from each hectare of land farmed. That’s a bit higher than the yields of 5.1 metric tons per hectare obtained by members of the Roundtable on Sustainable Palm Oil, based on a WWF report on palm oil sustainability and profitability in 2012. How NDC and Nava Bharat will ensure these yields is unknown, as neither organization responded to mongabay.com’s request for comment.

Nor is it clear what this development will mean for forests and wildlife. As data from Global Forest Watch show, the region holds critical wildlife habitat and much of its coastal area qualifies as a biodiversity hotspot. 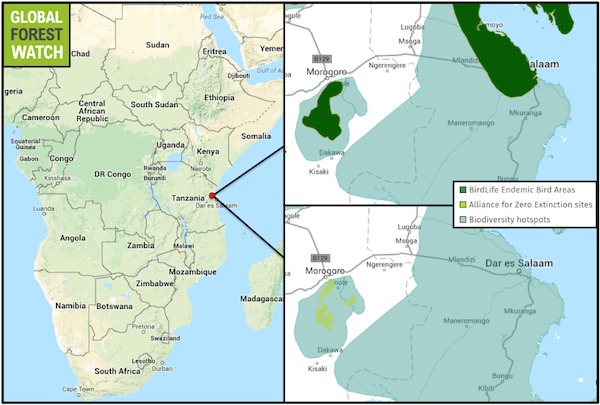 Much of the Ruvu River Basin is designated as a biodiversity hotspot, in which live threatened species at heightened risk of habitat loss. Large areas are specifically outlined as Birdlife Endemic Areas, where the ranges of two or more bird species found nowhere else in the world overlap. In addition, the area contains the only known habitat for Loveridge’s sunbird (Nectarinia loveridgei), which is listed by the IUCN as Endangered due primarily to habitat loss. Because of this, its range — located around the Ruvu’s headwaters — is listed as a critical conservation site by the Alliance for Zero Extinction. Click to enlarge.

The leftover biomass, the NDC website adds, will produce what they hope will be 10 megawatts of electricity to power the project’s energy requirements, with the remainder pumped into the country’s electrical grid.

As planned, the project intends to make use of “out growers” – that is, farmers under contract – from the communities of Kimala Misale in Kisarawe District and Dutumi in Kibaha District, which lie about 40 kilometers from the capital, Dar es Salaam, according to East African Business News. A palm oil production facility is also slated for construction in Kisarawe.

Since 2006, some organizations have voiced concern about using sizable chunks of valuable arable land, which covers less than 17 percent of Tanzania’s total area, for biofuels instead of food.

“With Tanzania routinely dependent on imported food aid as drought occurs with increasing frequency, the policy of producing fuel for export instead of food for Tanzanians will deepen poverty and food insecurity in Tanzania in the years to come,” wrote Abdallah Mkindee of the NGO Envirocare in a 2007 case study. 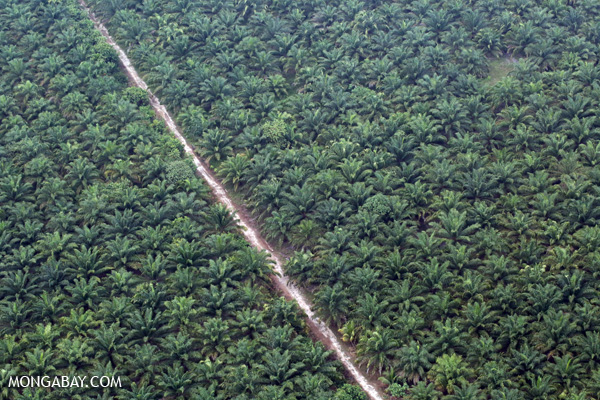 An oil palm plantation in Riau, Indonesia. Photo by Rhett A. Butler.

Palm oil is made by pressing the fruit of oil palm trees, primarily Elaeis guineensis. Photo taken in Malaysia by Rhett A. Butler.

Mkindee’s trepidation extended to the smallholders working the land involved in such projects. “Any farmers entering into contracts to plant and grow palm trees may be forced to sign away use of their land for many decades,” he wrote, adding that the government’s interest centered on Tanzania’s most fertile soil.

“These regions are the ones with the best access to water, and are therefore usually the areas where farmers [are] already growing food,” he added.

This research highlights another big issue in Tanzania – water. “Since oil palm needs about 150 mm of water per month, it would have to be irrigated, which is very, very expensive, in order to yield productively and profitably,” said Carter Coleman, CEO and founder of Agrica. “That’s the biggest challenge.”

Agrica is a company that, according to its website, aims to develop sustainable agriculture in East Africa. Coleman said they had originally intended to set up a sustainable oil palm plantation. “Back in 2005, biofuels looked very interesting,” he told mongabay.com in an e-mail. “When you looked at biofuel crops, oil palm looked best.”

But, he said, it became clear that oil palm would be prohibitively expensive, so Agrica has since switched to rice and other staple crops.

Related to water issues are global weather patterns, which in concert with many other factors such as fossil fuel prices make the price of the world’s most widely produced vegetable oil prone to fluctuations. In the past decade, the cost of a metric ton of palm oil has swung from $360 in 2005 to more than triple that price, peaking at nearly $1,250 in 2011, according to data from the World Bank. That volatility can make oil palm a risky investment. 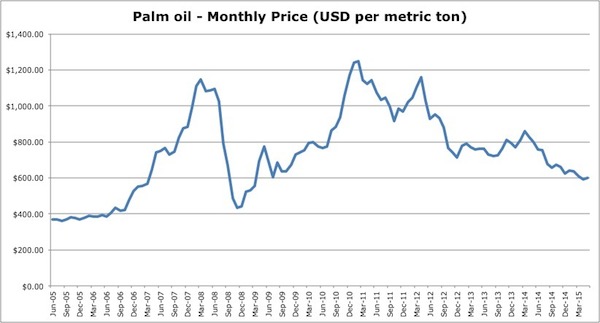 Locally in Tanzania, the water needed to sate a 10,000-hectare plantation may become an issue because there simply may not be enough in the Ruvu River. A 2010 assessment of the area funded by the International Union for the Conservation of Nature (IUCN) flagged increasing stress on one of Tanzania’s most important waterways.

“The Ruvu River is the source of surface water supply for domestic and industrial uses for about 3 million residents” who live primarily in Dar es Salaam, the authors wrote.

With the population of Tanzania’s largest city predicted to break 6 million by the beginning of the next decade, the IUCN issued a stern warning about the use of this finite resource that could limit the oil palm’s potential: “This population together with increases in water demand for industrial production, domestic [uses] and irrigation will result in serious water shortages.”