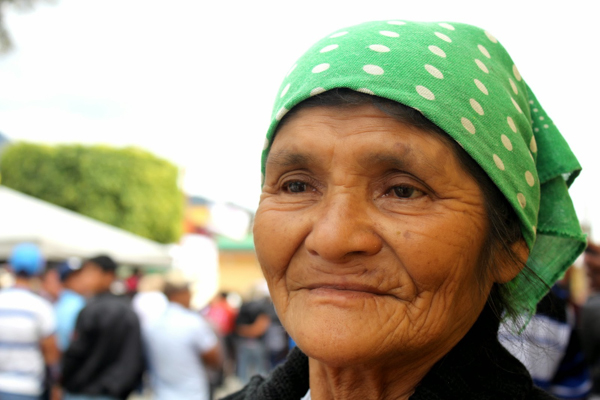 A resident of Mataquescuintla, Guatemala, at a November 2014 celebration of the second anniversary of the municipality’s referendum on mining. The referendum was one of many in the region, and residents voted against mining in every one. However, the government was not bound by their decisions. Photo credit: CPR-Urbana / Centro de Medios Independientes.

The sweet smell of the pine forest covers the hillside, fifty miles east of Guatemala City. Two young farmers come around the bend, walking down the rocky unpaved road, machetes in hand. Down below, the small town of San Rafael las Flores is surrounded by a patchwork of agricultural crops, the mainstay of the regional economy.

The Escobal silver mine sits at the base of a hill just above San Rafael las Flores, located in a municipality with the same name in the southwestern Guatemalan department of Santa Rosa. The source of years of conflict in the region, Escobal, which belongs to Vancouver-based mining company Tahoe Resources, is the third-largest silver mine in the world. It sits little more than a mile from the center of town.

Tahoe Resources’ underground Escobal silver mine sits at the base of a hill little more than a mile from the center of town in San Rafael las Flores, pictured above in the left foreground. The grey buildings in the left background and the water body are part of the mine development. Photo credit: Sandra Cuffe.

Two years have passed since this region was crawling with soldiers and police officers during a state of siege, but locals organizing against the Escobal mine and other potential mining projects continue to live with the impacts of the government crackdown. Today, the militarization of the area and the judicial persecution of local leaders continue.

So does the fear, said María Antonia Solares Lemus, a member of the Committee in Defense of Life and Peace from San Juan Bosco, another small community in the municipality of San Rafael las Flores. “We know our struggle is against a monster,” Solares Lemus told mongabay.com. Residents opposing mining face more of an uphill battle than they did before the region was militarized, but their motivation outweighs their fear.

“Our struggle is to defend water, to defend life, to defend a territory that we want to leave unpolluted for our children,” said Solares Lemus.

Communities in various parts of the Santa Rosa department and the neighboring Jalapa department came together to oppose mining in 2007 when they learned of plans for the Escobal project, initially owned by Vancouver-based Goldcorp. With the accompaniment of environmental and human rights organizations, they attempted to halt the mine’s construction in the courts and in the streets. 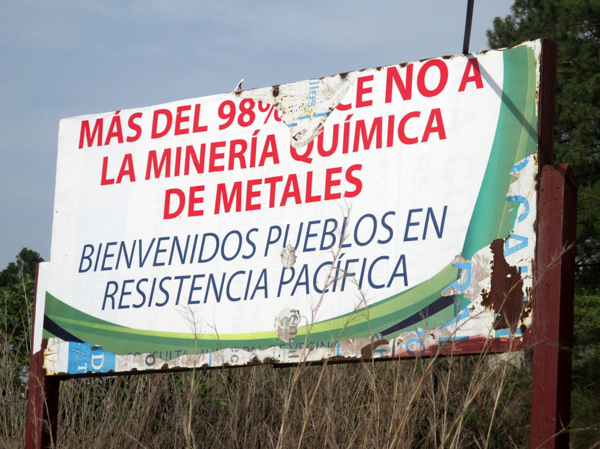 Large signs announcing that 98 percent of people oppose metallic mining are placed in communities and municipalities where referendums and consultations have taken place. This sign, situated outside the community of San Juan Bosco, reads ‘Welcome To Communities in Peaceful Resistance.’ Photo credit: Sandra Cuffe.

The situation heated up on April 3, 2013, when the Guatemalan government granted Tahoe Resources an exploitation license enabling it to operate the mine. Three weeks later, on April 27, the mining company’s private security guards opened fire on community protesters who had been maintaining a peaceful presence on private land close to the mining project entrance. Several youth and adults were wounded. The head of security, Alberto Rotondo, was later apprehended at the airport and is currently facing an ongoing trial.

The shooting sparked tumultuous incidents in the region on April 29 and 30. A police officer and a local farmer were killed.

In a late-night cabinet session on May 1, the Guatemalan government declared a state of siege in the municipalities of San Rafael las Flores and Casillas in the Santa Rosa department and Mataquescuintla and Jalapa in the Jalapa department, sending in thousands of soldiers and police.

Claiming the measure was to crack down on terrorism and drug trafficking, the government suspended constitutional freedoms and rights, such as the freedoms of assembly and movement and detainee and prisoner rights. The local residents most affected, however, were community organizers involved in the movement against mining.

Dozens of people were subject to search and arrest warrants during the state of siege, which lasted a week. The government then declared a 15-day state of prevention, which limits fewer rights.

The heavy military presence created a climate of terror in many communities. “It’s not easy to see an army vehicle in a community as small as San Juan Bosco, with the mounted guns on armored vehicles aiming into the streets. Kids ran away frightened. So did we. We were shut away in our homes for a long time due to the fear,” said Solares Lemus.

Tereso Martiniano Ramírez Juárez is involved with the grassroots anti-mining movement in the municipality of Mataquescuintla. He lived through Guatemala’s whole 36-year internal armed conflict, which ended in 1996, but told mongabay.com he had never seen anything like the militarization in May 2013. The region wasn’t one of the worst hit by state security operations and repression during the years of internal conflict, and the state of siege came as a shock.

“When the state of siege was established here, for us it wasn’t a state of siege; it was a state of war,” Ramírez Juárez said. “Armored vehicles showed up on the different roads, at the crossroads, and one would come across the military convoys, aiming their guns.”

Mataquescuintla resident Eddy Zuleta remembers the militarization vividly. Many schoolchildren are still traumatized and afraid of security forces, he told mongabay.com, explaining that the army surrounded elementary schools during the state of siege. 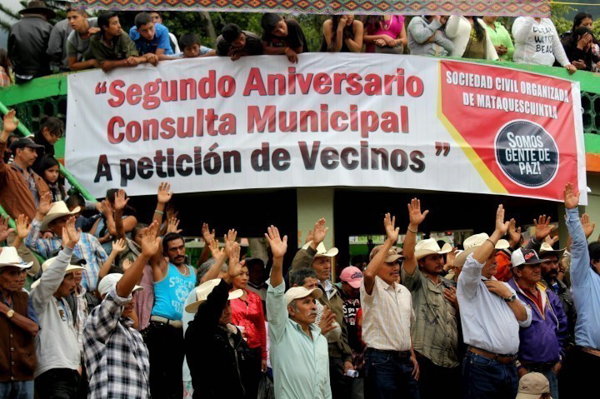 When Zuleta and a few other local anti-mining campaigners decided to show support for the local parish priest when they saw a show of force around the parish building, they were immediately surrounded and told they could not walk together. Soldiers and police aimed their weapons at them when he spoke up, Zuleta said.

“It defeated us to the point that we were afraid even to get together,” Zuleta said of the state of siege. The impacts lasted long after the measure was lifted.

“As organized civil society they disintegrated us because our leaders were persecuted. So many were on the run for seven months,” he said. “I think we all know that everybody is innocent until proven guilty. Here it was the opposite: everyone is guilty until proven otherwise. It’s terrible.”

Xinka Parliament leaders were among those targeted with criminal charges in the wake of the state of siege. The organization represents the Xinka, one of the two non-Mayan indigenous peoples in Guatemala. The organization’s primary focus is to defend Xinka territory in the departments of Santa Rosa, Jalapa, and Jutiapa, and to boost Xinka culture.

When the state of siege was declared in May 2013, the Xinka Parliament and communities were still reeling from the murder of one of their leaders a few weeks earlier. On March 17, four Xinka leaders were abducted on their way home to Jalapa from a community consultation in the community of El Volcancito in San Rafael las Flores, which the Indigenous representatives attended as observers to show their support for local residents taking a stand against mining. (After a municipal referendum on mining in San Rafael las Flores was halted by court action, many local communities organized their own grassroots consultations at the village level.)

Other local activists involved in the movement against mining in the region around Tahoe Resources’ project have also been murdered. On April 13, 2014, 16-year-old Topacio Reynoso was shot and killed near her hometown, Mataquescuintla. She was the coordinator of a local youth movement against mining. Her father, a key organizer in the 2012 municipal referendum on mining in Mataquescuintla, was wounded. The referendum was one of many in the region. Organized as consultations under Guatemala’s municipal code, residents voted overwhelmingly against mining every time. But the consultations’ legal weight has been subject to debate and the national government did not abide by the outcomes. 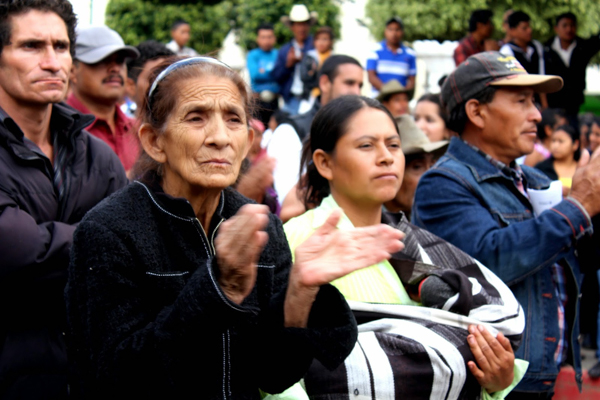 Then, just three months ago, on April 5, 2015, Telesforo Pivaral, a member of the Committee in Defense of Life and Peace in San Rafael las Flores, was murdered.

Many locals believe Pivaral, Reynoso, and Ucelo were killed because of their involvement in the anti-mining movement, and that the mining company or government are ultimately responsible. Communities and human rights organizations continue to demand justice in all three cases.

Neither the Office of the Public Prosecutor nor Tahoe Resources responded to requests for comment.

Criminalization of residents involved in the movement against mining also continues. So does the militarization that began with the state of siege in 2013. The bulk of the soldiers left, but some stayed behind.

Morales, an organizer from San Rafael las Flores, said locals view the military presence as government intimidation. “Any leader or person who wants to speak out against mining prefers to stay quiet rather than face legal proceedings or harassment from the state,” said Morales. “Basically, it’s sowing fear in the region,” he said of the army’s ongoing presence. 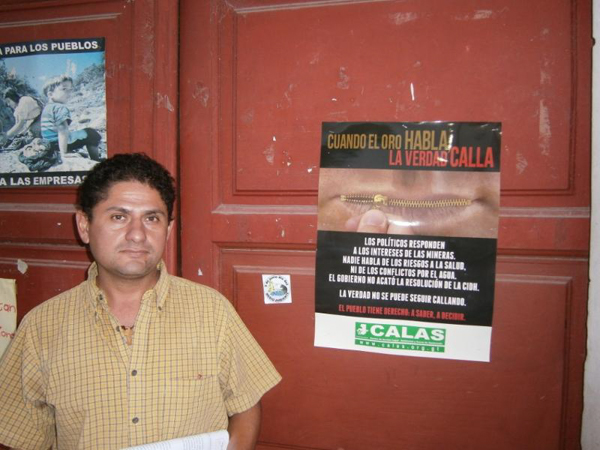 The state of siege was designed to debilitate community resistance to mining, said Morales, and it occurred when San Rafael las Flores residents had been pushing for a municipality-wide consultation process to ask people whether or not they wanted mining.

“That was what the state of siege was basically seeking – to destroy resistance,” said Morales. “What they sought was to break the unity in the community of San Rafael las Flores and of the Committee in Defence of Life and Peace,” he said. For months and even years afterward, significant energy and time had to be diverted to the legal defense of detained community leaders and others facing charges.

The conditions for a municipal referendum on mining in San Rafael las Flores that were coming together prior to the 2013 state of siege have not materialized since.

Production at Tahoe Resources’ Escobal silver mine began in September 2013. In its first year, 2014, the underground mine produced 20.3 million ounces of silver as well as significant quantities of gold, lead, and zinc. The company estimates the net value of the mine to be greater than $1.5 billion.

The state of siege still casts a shadow in the region, and the ongoing military presence and criminalization of community leaders stops some from getting involved or speaking out against mining. But the government crackdown did not succeed in destroying local resistance.

Residents are again taking to the courts and to the streets to demand justice and to protect their lands. Locals wounded in the April 2013 shooting of protesters initiated a lawsuit against Tahoe Resources in Canada. In Guatemala, they have packed courtrooms in proceedings against Rotondo, against the company for pollution, and against the government for issuing a controversial exploration permit near the Escobal mine.

Stopping the expansion of mining activities in the region is a chief objective, but many in the local anti-mining movement ultimately want the Escobal mine closed. 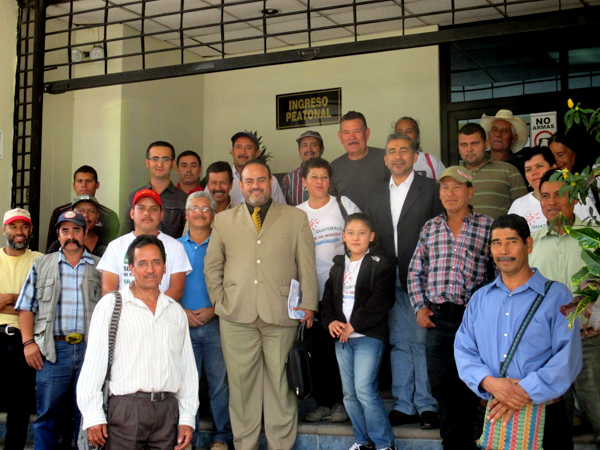 San Juan Bosco and Mataquescuintla residents gather with their lawyers on the courtroom steps in Guatemala City in May 2015, following a hearing concerning the legality of a mining exploration license the government granted to Tahoe Resources. The license could potentially enable the company to further expand the contested Escobar mine. Photo credit: Sandra Cuffe.