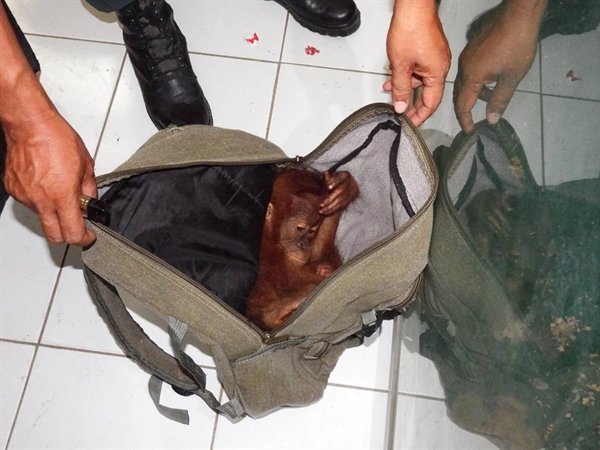 Indonesian authorities caught a prominent wildlife trafficker with this baby orangutan in his bag in February, leading to his conviction last week. The sentence has been hailed as a win for Indonesia’s rich biodiversity amid what has generally been weak enforcement of wildlife crimes. Photo: Wildlife Conservation Society

A prominent Indonesian wildlife trafficker who was arrested while trying to sell a baby orangutan in February was sentenced last week to two years behind bars and ordered to pay a Rp10 million ($752) fine.

The trafficker, Vast Haris Nasution, admitted to running a trading network that stretches from Indonesia’s westernmost provinces of Aceh and North Sumatra, where he illegally sourced a variety of protected species and animal parts from local hunters and dealers, to Java in the center of the country.

His capture followed the arrest and conviction of one of his staff, Dedek Setiawan. In April last year, conservation authorities found Dedek in the North Sumatran city of Medan with two golden cats, a siamang and a gibbon. He had been using the Internet to connect with buyers. A few months later he was sentenced to 16 months in prison and fined Rp5 million.

Indonesia is a hotbed of illegal wildlife trading, but traffickers often escape significant punishment, so the verdict constitutes a win for Indonesia’s biodiversity, said Noviar Andayani, director of the WCS’s Indonesia program.

“We hope that the very clear and firm decision from the judge and prosecution today will have a deterrent effect among the community, sending a clear message that wildlife crimes can and will be punished,” Noviar said in the statement.

“Since the early 70s there have been over 3,000 confiscations of illegal pet orangutans in Sumatra and Borneo but only a handful of actual prosecutions, and all of them only in the last few years,” he said. “For far too long those involved in wildlife crime in Indonesia have known the chances of any serious legal consequences to their activities were essentially almost zero.”

He added, “Effective law enforcement and the threat of serious consequences for those involved is an essential component of the conservation arsenal if there is to be any hope of preventing the extinction of orangutans, and many other heavily traded and persecuted species here.”