Greenpeace responds to Tropical Forest Trust on moving ‘Beyond Certification’

Editor’s Note: Greenpeace submitted this commentary in response to an interview Mongabay recently conducted with Scott Poynton of Tropical Forest Trust (TFT). In the interview, Poynton said the forest commodity sector needs to move ‘beyond certification’ to effectively address social and environmental issues. The views and opinions expressed in this commentary are those of the author and do not necessarily reflect the policy or position of Mongabay.

Logging in Malaysia. Photo by Rhett A. Butler

We at Greenpeace believe certification schemes are far from perfect, nor are they the only tool to achieve environmental and social goals; however some schemes are stronger than others such as the Forest Stewardship Council (FSC), and we do believe that they have an important role to play. Here we respond to TFT’s attack on certification.

TFT says certification “stifles innovation”, is “falling behind” and has “weak standards”. Clearly TFT is underestimating change that is occurring within certification schemes and standards. Just ask any forest manager or certification body working with FSC — they will say there is so much change that they can hardly keep up! TFT have disengaged from certification for several years so may be out of touch — it would pay for them to take a look at the certification systems and see what innovations are afoot. For example, over the last 5 years there has been a huge overhaul in FSC standards for responsible forest management, with international generic indicators being approved recently, which will now be translated into indicators at a national level together with stakeholders. This will be the most comprehensive and strongest set of standards for forest management to date. The standards development process has been highly transparent and with an enormous amount of stakeholder involvement — meaning we would expect TFT would support it. Of course, we still need these standards to be implemented strongly on the ground by companies and communities, and rigorous audits are required in the certification process — something that is not always done well.

Within these standards is the possibility for certification to facilitate payment for ecosystem services. This is a critical new development in FSC. If forests are going to be protected, there will need to be financial incentives and benefits, in particular for local communities who may forego some uses. These finances are desperately needed as most of the so-called ‘breakaway’ progressive companies, such as Nestle or Unilever, don’t pay price premiums to producers for their products that are from environmentally and socially responsible sources. These price premiums would help companies pay the cost of forest protection.

A further example of a recent step forward in FSC: at the last general assembly of the FSC a motion on the protection of “intact forest landscapes” was passed with the support of over 90% of the membership. This was a watershed moment for the FSC as hundreds of stakeholders from indigenous peoples, forestry companies, manufacturers, certification bodies, and NGOs with divergent views came together to take a stand for the threatened last remaining large areas of forest. A final example of innovation from FSC is around the theme of restoration. FSC has a long-standing rule of not certifying plantations which carried out forest clearance after 1994. However requirements for restoration and compensation are being developed to enable companies that have breached this rule to transform their practices and join the FSC system. 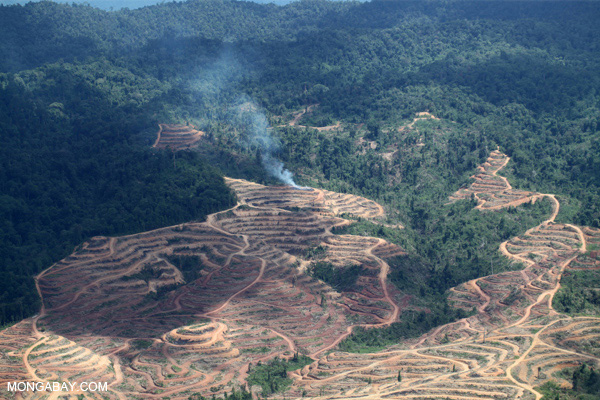 Meanwhile, to reward a high level of performance in the palm oil sector, rather than focus on the RSPO certification scheme, Greenpeace has worked together with a group of progressive companies and other NGOs to create the Palm Oil Innovation Group (POIG). POIG has identified important additional requirements that are not addressed by existing standards, and has third-party verification as a core requirement. Traders, manufacturers and consumer goods companies can now preferentially buy from POIG producers and also pay a premium to reward performance. Here is a clear example of innovation and stronger standards linked to third-party verification and certification — yet TFT does not recommend companies join the POIG.

To answer the question of trust that is raised by TFT, some background on how certification came about is needed. Voluntary certification of forests and plantations emerged in response to the failure of governments to address key environmental issues and out of a need to be able to identify what is ‘good’ forest management and a ‘good’ product in the market. FSC was the first global scheme, born in the early 1990s, and to a large degree it was established because claims and information from the logging and timber companies could not be trusted. The public had been lied to for years by companies, so an independent system was needed to verify if good forest management was actually taking place. TFT say that we should trust people (especially CEOs) to do what is right, and in the early days of the FSC when it was a simple system, it was based on a high degree of trust. But human nature and economics meant some companies and certification bodies began to exploit weaknesses and lack of clarity in standards, which required increasing complexity in the system to patch the loopholes. It was an unfortunate but inevitable process.

How can we validate promises of environmental and social performance without independent or third-party verification? Can we trust first parties (the companies themselves) or second parties (e.g. technical support organizations like TFT)? We would say that third-party verification and certification has a key role to play before any claim can be believed. But we agree that much of the work that needs to be done is prior to certification, similar to the first stages that TFT is proposing (values, transparency, transformation). TFT say their thinking on verification is the part that “is the least developed.” At least there is agreement that third-party verification is needed. So the question is: verification by whom? We fully support the enabling and capacity-building of local community representatives or NGOs to monitor and whistleblow on company performance (providing communities and NGOs have this as their priority and they want to focus their activities on this role). With active outreach and support to ensure strong feedback on performance on the ground from local community or NGO reps, third-party verification and certification becomes more effective and efficient, as an external auditor will be better directed to assess issues of non-compliance. This streamlines and reduces costs.

However, to rely solely on this local-level monitoring to validate compliance with standards or commitments does not guarantee credibility. Local stakeholders can be biased either for or against a forest or plantation manager depending on their experience. Not that all external third-party auditors are objective or unbiased — but there is a higher likelihood within the technical controls of verification and certification systems. Also there is no guarantee that local stakeholders will cover all the necessary requirements nor is it likely to be sufficiently systematic. However we fully support the building of local third-party auditor or institutional capacity to carry out verification rather than relying only on international staff.

We do also fully support the innovation of severing the economic link between the certification body (auditor) and their company client. We have long argued for this, as it is a key weakness in current certification systems, allowing a conflict of interest to interfere with an auditor’s judgement. Key proposals to remedy this are to have the selection of the certification body removed from the hands of the company, and have the payment for certification ‘firewalled’ in an escrow fund to break the direct financial link.

TFT claim certification is “too expensive and too much money wasted”. We agree that certification is too expensive and we need to find more streamlined ways of verifying compliance with standards. However, it must be remembered that much of the cost of certification is not the audit itself but the transformation, change and preparation required to meet the standards — work that TFT have done well for many years. In the next few years technology will help a lot, with better satellite ‘eyes in the sky’ that can save costly time in the field, and which will increase the current low rate of sampling. And certification has fallen into the trap of checking on a lot of things that are not critical for achieving performance on the ground. But for TFT to propose that companies should abandon certification in favor of spending their money on TFT’s approach and local level monitoring smacks of self-interest, especially when their critique of certification is based on several false assumptions.

Where we believe certification systems will need to evolve quickly is in situations of complex supply chains where there is a need for traceability to on-the-ground performance. This will become more important with corporate cross-commodity commitments. It may be that with products that come from the same landscape, that the time has come for considering ‘jurisdictional’ approaches. These would verify environmental and social performance at a district or municipality level. Thus any sourcing traced to that third-party verified district would be in compliance, not matter what the commodity.

To summarize, TFT raises some good points on finding more cost-effective ways to achieve third-party verification and on re-adjusting our expectations of certification. But some of their reasons for moving ‘beyond certification’ don’t hold up in light of the level of change and innovation occurring within certification systems. For many years TFT have done fantastic work helping companies transform and eventually achieve certification. We encourage TFT to value and appreciate the role that third-party verification and certification can play, and to continue in their important role of helping forest and plantation managers to transform in order to be able to meet the required standards.

[Declaration of interest: Greenpeace does not receive any funds from companies and has no financial interest or paid collaboration in relation to companies achieving certification. Grant Rosoman represented Greenpeace as a member of the FSC International board for 7 years including one year as board chair. Greenpeace is a member of FSC but is not a member of RSPO. ]