The El Dorado Nature Reserve sits within the Sierra Nevada de Santa Marta mountain range on the northern coast of Colombia. First designated in 2006, the reserve now protects 2,250 acres of valuable wildlife habitat. Recently, the reserve was further expanded to include a 148-acre parcel that is specifically important to the continued survival of a highly threatened bird species.

The Santa Marta parakeet (Pyrrhura viridicata) is listed as Endangered by the IUCN. It is a small, green parrot with white rings around its eyes, a belt of red feathers across its belly, and blue feathers at the base of its tail. Many South American parrot species are small and green with bright colors splotched across their bodies. In this respect the Santa Marta parakeet is not remarkable. What makes the Santa Marta parakeet special is where it lives. It is endemic to the Sierra Nevada de Santa Marta range on the Caribbean coast of Colombia, a region highly threatened by habitat loss, which is the primary threat to the parakeet.

The Sierra Nevada de Santa Marta are home to an array of unique species due in large part to the range’s isolation.

“The mountains are actually distinct from the massive Andes range that covers the length of the continent, and this distinct heritage is why we believe there are so many evolutionarily divergent species,” said Benjamin Skolnik, Director of international program development at the American Bird Conservancy, and who has been involved with conservation projects in this region for several years. “Dozens of plants and animals are unique to this location. The slopes offer a range of tropical forests that alter dramatically with the steep rise in elevation, a range of habitats that helps explain the staggering variety of life found in these mountains – some 635 bird species of which 19 are endemic to Santa Marta.”

Only 15 percent of the original vegetation within the Santa Marta mountains remains intact, with the rest converted for agricultural purposes and other uses. Many of the endemic species in the mountains are endangered, including the Santa Marta parakeet. BirdLife International estimates that only between 3,300 and 6,700 adult birds exist today – and that number is declining.

The Sierra Nevada de Santa Marta is protected as a National Natural Park – a reserve for the use of the indigenous people who live in the mountain range – and as an international biosphere reserve. This theoretical protection does not always work in the real world, however. One of the endemic birds of Santa Marta is the blue-bearded helmetcrest, a hummingbird that had not been seen for almost 70 years when it was rediscovered in February 2015. The survival of this species is imperiled by conversion of its habitat to livestock grazing areas, even though it lives in an area that is officially protected on paper.

Fortunately for the Santa Marta parakeet, there have been efforts to protect its range in the mountains with conservation plans on the ground, not only on paper. An area first comprising 1,600 acres was designated as the El Dorado Nature Reserve in 2006 by a network of conservation groups including the American Bird Conservancy, Fundación ProAves and Conservation International. The new 148-acre tract is only partially forested, but contains a high concentration of Andean wax palms (Ceroxylon ceriferum), that provide important food sources and breeding sites for the parakeets. 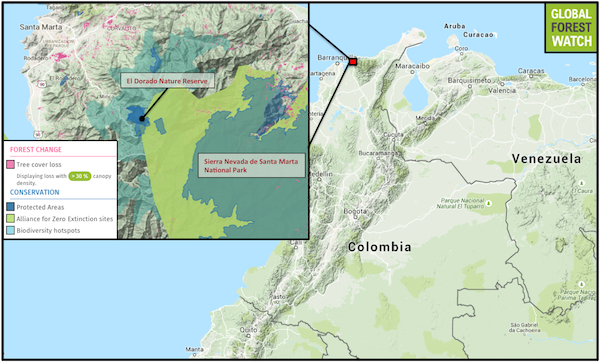 While the region surrounding El Dorado Nature Reserve lost approximately 2,000 hectares of tree cover between 2006 and 2014, according to data from Global Forest Watch, almost no loss occurred in the reserve itself. The reserve occurs in a biodiversity hotspot, as well as in an Alliance for Zero Extinction site, which means it is inhabited by species that are at high risk for extinction and that are found nowhere else in the world. Click to enlarge.

“The El Dorado Reserve ranges from 950-2,600 [meters in] elevation and is montane forest that boasts wax palm trees favored by [the] Santa Marta parakeet,” Skolnik told mongabay.com. “A small lagoon is located on the ridge top that harbors the Critically Endangered San Lorenzo harlequin frog (Atelopus nahumae). Many unique species and sub-species bear ‘Santa Marta’ in the common name, making it easier on visiting naturalists to learn the wildlife – as well as a bit comical. In addition to the endangered Santa Marta Parakeet, you may stumble across the Santa Marta bush-tyrant (Endangered), Santa Marta warbler (Vulnerable), Santa Marta antpitta (Vulnerable), and Santa Marta screech-owl (being described as a new species to science and probably Critically Endangered).”

Even though the El Dorado Nature Reserve is protected, Skolnik cautions that threats still exist. “The proximity of the San Lorenzo ridge to populated areas along the Caribbean coast have made this site particularly vulnerable to forest loss as people move upslope to clear land for cattle grazing, agricultural and vacation homes,” he said. “The cooler, montane climate attracts residents of nearby cities and development of vacation homes, but extremely rough roads has kept this threat at bay. Recently a neighbor of the El Dorado Reserve tried to illegally clear forest, but ProAves, with the support of police and environmental officials, was able to arrive in time to deter this action and take legal action.”

The establishment of the reserve has allowed for implementation of conservation plans aimed at stabilizing and eventually increasing Santa Marta parakeet numbers. For instance, ProAves – which owns and operates El Dorado – is working to establish more wax palm trees in the reserve. Through support of the American Bird Conservancy, an additional guard will be hired for the reserve who will oversee restoration and monitor the parakeets. Invasive pines originally planted for timber are also being removed and the land restored with native parakeet habitat.

“The pines are used in the construction of tourism infrastructure such as viewing platforms, benches and visitor cabins,” Skolnik said. “A nest box program is also being carried out to grow the population of parakeets and learn more about their behavior and reproduction.” 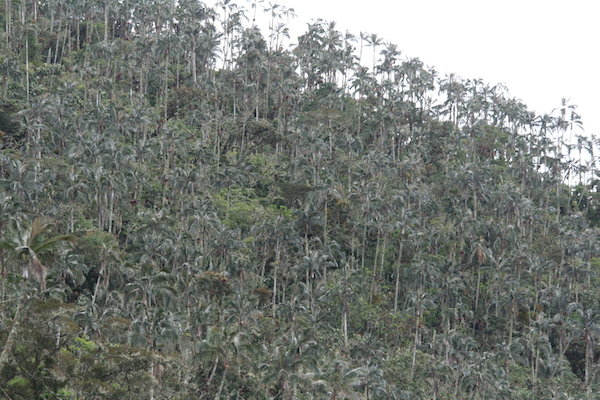 This grove of wax palms in the reserve provides food and nesting sites for the parakeets. Photo courtesy of Benjamin Skolnik.

In contrast to the possibly bleak future of the blue-bearded helmetcrest, there seems to be reason for hope that at least some species like the Santa Marta parakeet may persist in the Sierra Nevada de Santa Marta Mountains.

“I am optimistic about efforts to sustain conservation of the Santa Marta parakeet,” Skolnik said. “The reserve we have created is growing and as we restore additional habitat, so too do we see the revival of the parakeet. Local communities are becoming aware that this bird is special and found only in Santa Marta, and that we all must ensure the protection of its native habitat.”