According to a comprehensive new study published in the journal Science, bumblebees are particularly vulnerable to climate change disruptions. Historical bumblebee ranges have shrunk on their extreme southern edge, while species to the north fail to adapt with any significant migration into cooler regions. “Climate change appears to contribute, distinctively, and consistently, to… range compression of bumblebee species across both North America and Europe,” the authors state.

The five-year-long analysis of thousands of newly digitized observations concluded that multiple species of these vitally important pollinators are experiencing alarming decline and extinction across both continents. “The scale and pace of these losses are unprecedented,” states Dr. Jeremy Kerr, University of Ottawa conservation biologist and lead scientist on the study.

Bumblebees at the southern range extremes, and in the hottest areas, experienced the steepest drops in population. Lack of movement at the northern range extreme is “compressing” habitat. The news is troubling scientists who call for more research and urgent action on the problem.

“This was a surprise,” said Dr. Leif Richardson, a study researcher, and bee expert at the University of Vermont’s (UVM’s) Gund Institute for Ecological Economics. “The bees are losing range on their southern margin and failing to pick up territory at the northern margin – so their habitat range is shrinking.”

With the annual economic value of ‘free’ Bombus ‘buzz’ pollination services (sonication) to U.S. agriculture estimated at over $3 billion, their potential loss threatens availability of a wide variety of fruits and vegetables including blueberries, tomatoes, peppers, squash and clover. “Rising food prices are just one consequence of bumblebee demise,” says Richardson. “Like everything else, there will be others we cannot possibly anticipate.”

Researchers utilized 423,000 records gleaned from scientists, students, taxonomists, and museums across two continents, to look at the movements of 67 species over 110 years. They estimate that bumblebees have lost 185 miles (300 kilometers) from the southern edge of their range across continental Europe and North America from a baseline year of 1901 until the present.

It was a discerning, arduous study. “Observations had to meet three criteria to be included”, explains Richardson, “verification of species, exact location of sighting, and an exact date of the occurrence.” The team measured for differences in species’ northern and southern range limits, the warmest and coolest temperature ranges occupied, and the mean elevations of the observational sites.

Two of the largest factors impacting local bumblebee populations – intensification of land use and agricultural pesticide application – were figured into the data analysis to measure potential effects on the overall movement of bee populations. Both were ruled out in regard to range shifts.

The researchers used detailed, North American records, available since 1991, of the application rate of the most popular agricultural neonicitinoid pesticide, comparing it against a baseline period of 1901 to 1974, before the chemical was in use. Scientists saw consistent movement as temperatures warmed, but not in correlation to increased pesticide use, with the study stating “neither total pesticide nor neonicotinoid applications related to observed shifts in bumblebee historical ranges or thermal limits.”

Increased intensity of land use was factored out as a cause of decline as well, when comparisons were made between regions of less land use in Canada, and more intensive use in northern Europe, over the same time periods. Both regions showed consistent responses by bumblebee colonies, despite differing levels of land use pressure.

“Bumblebee disappearances from warm, southern areas are just as likely when there is no pesticide use and little agriculture,” concludes Dr. Kerr.

Bumblebees already face a variety of human-caused and natural pressures: use of increasingly more lethal agricultural pesticides, loss of habitat as a result of human activity such as logging and mining, and deadly “pathogen drift” – a crossover of disease into wild populations from both honeybees and commercially imported bumblebees. 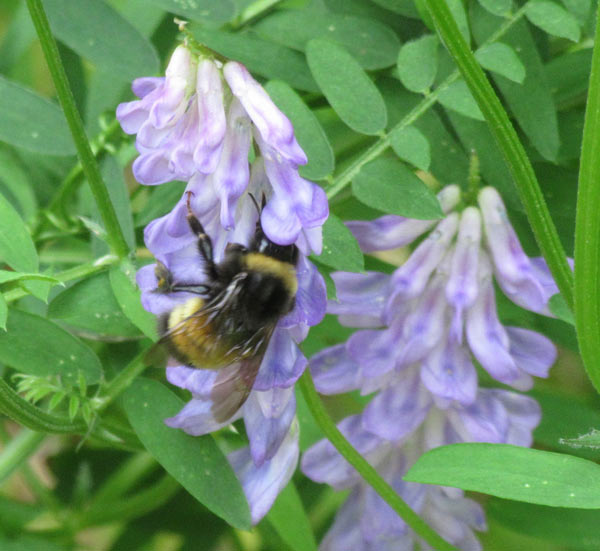 A common Black and gold bumblebee (B. auricomus) foraging in the Green Mountain National Forest, Vermont. Species like B. auricomus are lagging in their response to climate change, failing to shift ranges. Photo credit: Karen Johnston.

The study, according to many experts, supplies the final piece to the puzzling and rapid disappearance of bumblebee populations. Warming temperatures interact with changing habitat and cause “sudden shifts to the bumblebee life cycle that no longer synchronize with preferred forage crops,” Richardson explains. “Bees are emerging earlier in response to warmer temperatures and finding little to no forage.”

“As for habitat, continued warming creates changes to vegetation over time.” adds Richardson. “Alpine tree lines have advanced upslope in response to human activity and warming temperatures, so open areas suitable for bumblebee nesting, foraging and overwintering are taken over by the advancing trees. Northern species of Bombus are squeezed downslope, as seen in the study. This trend contrasts to bee colonies in southern latitudes expanding their ranges upslope to take advantage of cooler conditions. It’s all connected.”

Dr. Kerr and the study team were surprised to find bumblebee species along the northern edges of their range not moving in response to climate change pressures. Scientists had expected them to exhibit adaptive behavior by migrating into more temperate regions and shifting ranges, like many species of butterfly in similar habitats. The failure to move has been consistent across both continents. Though some European bumblebees take advantage of east-west running European mountain ranges and move upslope, UVM’s Richardson cautions that “eventually they may simply run out of hill.”

The team speculates that butterfly species’ origins and evolution in tropical regions give them a genetic advantage, allowing for ease in expansion during warming periods, with southernmost populations remaining stable in conditions resembling their tropical beginnings. 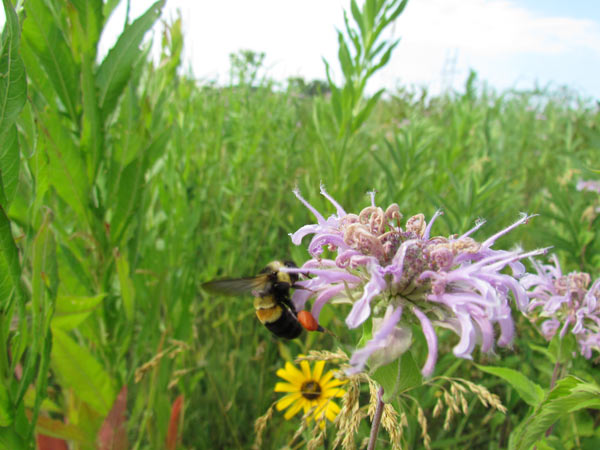 The Rusty patched bumblebee (B. affinis) foraging on a Bee balm blossom (Monarda fistulosa). Formerly common, this species is now near extinction across most of its range. Photo credit: Christy Stewart, 2012, xerces.org.

In contrast, Bombus ssp. have unusual evolutionary origins in the cool, temperate Paleoarctic period. Their genetic adaptation to a colder, wetter climate – a trait that makes bumblebees superior pollinators in the northern parts of their range – may now put them at great risk.

“For species that evolved under cool conditions, like bumblebees, global warming might be the kind of threat that causes many of them to disappear for good,” warns Dr. Kerr.

Bumblebees may require human assistance to survive, as the global mean temperature continues to rise, the study suggests. “We need new strategies to help these species cope with the effects of human-caused climate change, perhaps assisting them to shift into northern areas,” says Kerr.

This bold proposal: to move bumblebees out of high-risk areas and into new habitat that would support their continued survival, is a controversial one. The concept of “assisted migration” has long been discussed in conservation biology circles as too high-risk, though it has gained wider support as warming continues.

Dr. Richardson urges caution. “There’s a slippery slope in effect when you relocate a species from one area into a new one. Disease pathogens can be brought in, and new ones easily acquired in such a drastic move. The last thing bumblebees need is another problem courtesy of mankind, another reason for decline.”

His fear is well founded. Wild populations of several bee species in the U.S. West and South America have already experienced near extinction declines as a result of a lethal gut parasite, Crithidia bombi, introduced into the wild when infected commercially imported bumblebees escaped out of greenhouses.

Summing up the significance of such a large study, bee expert Richardson admits “This turned out to be less a study of bumblebees than another in a long line of conclusive studies that warn about the disaster of a warming world.”

Biologist Kerr concurs, adding, “We need to figure out how we can improve the outlook for pollinators at continental scales, but the most important thing we can do is begin to take serious action to reduce the rate of climate change.”