What do China, Kenya and India have in common? Wildlife trafficking

A white rhino in Kruger National Park in South Africa. Photo by: Rhett A. Butler.

When it comes to trafficking rhino, elephant, and tiger parts the biggest players are China, Kenya, India, Vietnam, South Africa and Thailand, according to a new paper in the Proceedings of the National Academy of Sciences (PNAS). Examining news media reports aggregated by HealthMap: Wildlife Trade, researchers were able to pinpoint the most important countries (called ‘nodes’) for exporting, moving and importing illegal wildlife parts worldwide.

“Our aim was not to point fingers but to identify key players in the trade,” said lead author Nikkita Patel, who conducted the research as a part of her dissertation with the University of Pennsylvania.

China proved the biggest ‘node’ for both rhino and tiger trafficking, while Kenya was the largest node in elephant trafficking–though China was second. In all, the paper identifies the six or seven most important nodes for each species (see list below).

“[If] you’re going to war against the wildlife trade and you need to have a good [idea] of where the players are and where are the nodes,” Sarah Olson, the associate director of wildlife epidemiology with the Wildlife Conservation Society, told the Washington Post. Olson, who was not affiliated with the study, praised its use of data to aid those combatting the illegal trade. 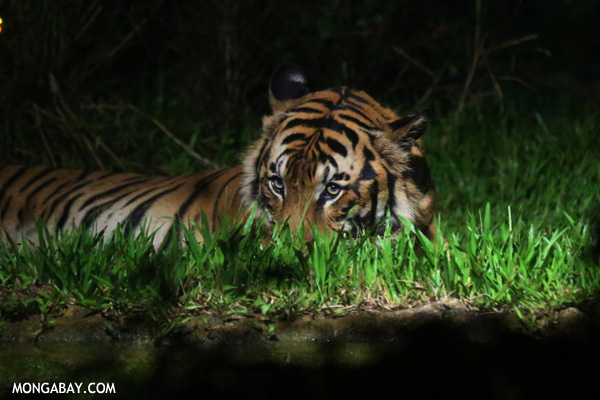 Captive tiger. There are more captive tigers in the world than wild ones. Photo by: Rhett A. Butler.

“Moving forward, we can track how these nodes change in time, we can improve the data we put into it and we can monitor the impact of different interventions.”

Patel said she believes her study “can inform strategic decision-making” but that ongoing research will be required to stay ahead of the curve.

“Criminals are quite savvy and trade routes will evolve in order to evade enforcement. Real-time analyses will be important in order to stay on top of current trade trends rather than relying on static, cross-sectional analyses based on one time period.”

To come up with their analysis, Patel and her team examined several hundred confiscated shipments from August 2010 to December 2013, including 232 shipments of elephants, 165 of rhinos and 108 of tigers.

But Jacob Phelps with the Center for International Forestry Research criticized the study for focusing on charismatic animals that already reap most of the media attention and conservation efforts devoted to wildlife trafficking.

“Tigers, rhinos and elephants are by no means the most widely traded of taxa. It’s things like seahorses, plants, pangolins, ornamental birds, corals for fish tanks, endangered fish for restaurants–these are the things that represent the bulk of illegal wildlife trade,” he told Wired. “We see a lot more reporting on tigers rather than turtle eggs or softshell turtles being served at a restaurant. We need to be aware that bias carries through.”

But Patel said they examined the trade around these three animals, because that where the data was strongest. 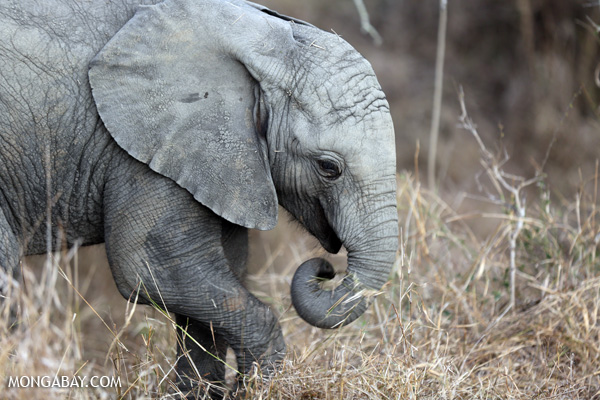 Young elephant in South Africa. Photo by: Rhett A. Butler.

“It will be interesting to further this work for other animals as the system continues to accumulate data,” she noted.

The paper also looked at where educational campaigns could make the most difference in disrupting the illegal wildlife trade.

“Again, China, Vietnam, Thailand, and India are important countries for educational programs,” the researchers write. “It is interesting to note that almost all key intermediary nodes, key import nodes, key nodes for network disruption, and key nodes for dissemination of information
included China as one of its targets. With its increasing global economic importance, China has to be a major focus for wildlife trade reduction programs.”