The poachers’ bill: at least 65,000 elephants in Tanzania

An elephant in Ruaha National Park. In just a few years poachers have wiped out most of the elephants in the Ruaha-Rungwa landscape, cutting the population down by 76 percent. Photo by: Cristian Samper/WCS.

During the last couple years there have been persistent rumors and trickles of information that elephant poaching was running rampant in Tanzania as the government stood by and did little. Yesterday, the government finally confirmed the rumors: Tanzania’s savanna elephant (Loxodonta africana) population has dropped from 109,051 animals in 2009 to just 43,330 last year—a plunge of 60% in just five years. While some populations in the north actually rose, poachers decimated elephant populations in the nation’s vast southern wildernesses.

“It is incredible that poaching on such an industrial scale has not been identified and addressed before now,” said Steven Broad, the Executive Director of the anti-wildlife trade group, TRAFFIC’s.

In 2013, TRAFFIC warned that the smuggling route used by ivory traders had moved to Tanzania’s port cities, a sign that poachers were also targeting the country with impunity.

In all Tanzania’s elephant population fell by 65,721 animals in five years, but that may not even reflect the full tally of the poachers’ bill. If one assumes, an annual population growth rate of 5%, this could mean more than 85,000 elephants were slaughtered for their ivory in Tanzania since 2009 or 17,000 pachyderms every single year. Such a scale may be one of the worst in Africa and even eclipses the announcement last month that Mozambique lost 10,000 elephants, representing nearly half of its population. 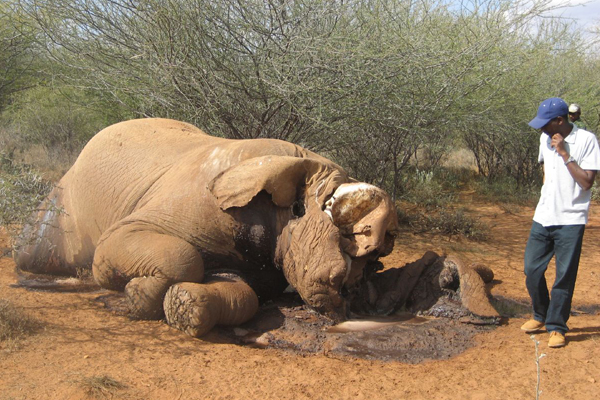 An elephant killed by poachers in Kenya. Photo by: Elaine Dawn/Creative Commons 2.0.

Poachers hit elephant populations hardest in remote protected areas in the south, such as Ruaha National Park, Rungwa Game Reserve, the Malagarasi-Muyovozi Wetlands, and the Selous Game Reserve, where conservationists have for years reported that elephants were dying en-masse.

In the Ruaha-Rungwa landscape, the government found that the elephant population had fallen from 34,600 in 2009 to 8,272 last year, a catastrophic drop of 76 percent.

He added that “Ruaha is one thing but Rungwa I believe is an epicentre of where all the trouble has come from.”

The Minister also announced a re-survey of the Ruaha-Rungwa landscape given the numbers were so poor.

Still, there were a couple bright spots in the government’s data. For example, elephant populations in the Serengeti double, rising from 3,068 animals to 6,087. But overall, the picture of overall carnage is hard to avoid.

In response to the new data, Lazaro Nyalandu, said the country would add another 500 wildlife rangers to its rosters this year (500 were added last year as well) and double the number of rangers in the hard hit Ruaha-Rungwa landscape. The country is also working with neighboring Zambia to crack down on the illegal trade. 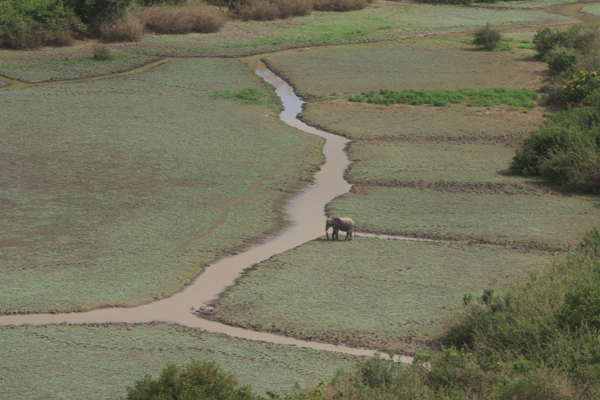 An elephant in Selous. This UNESCO World Heritage Site has been infiltrated by poachers who have wiped out many of its elephants. Photo by: USFWS.

“While the measures announced this week by the Tanzania government are welcome, there is a real risk that it could be a case of too little too late for some elephant populations,” said Broad with Traffic. “Tanzania has been hemorrhaging ivory with Ruaha-Rungwa the apparent epi-center and nobody seems to have raised the alarm; it is clearly essential that the government establish exactly how this has been allowed to take place, while taking urgent and incisive action to bring the situation under control.”

The new survey from Tanzania will help conservationists figure out just how many savannah elephants are left on the continent after a poaching crisis that began around 2007. Currently, an initiative called the Great Elephant Census is counting elephant populations across sub-Saharan Africa. Although the census has uncovered some bleak numbers—such as Mozambique’s loss of 10,000 elephants—it has also recorded some hope. For example, Uganda’s savanna elephant population is now around 5,000 animals, a significant rise from a 1980s low of 700-800. Moreover, Botswana remains the global stronghold for savanna elephants with a population of nearly 130,000 and no evidence of poaching in recent years. 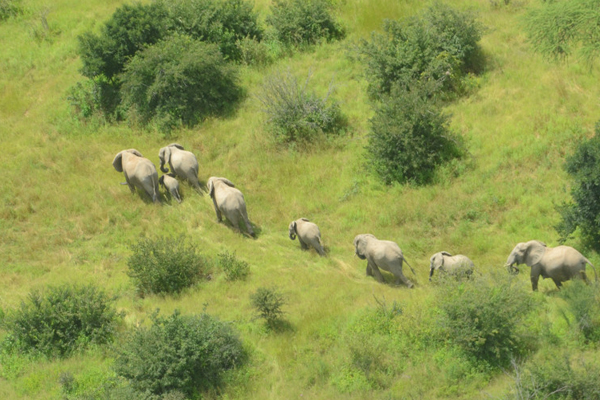 Aerial view of elephant herd in Ruaha National Park. Elephants have been decimated in this protected area. Photo by: Cristian Samper/WCS.