This article is the first in a two-part series on mangrove conservation. Read the second part here.

In a press conference held in May 2015 in the Sri Lankan capital of Colombo, U.S.-based nonprofit Seacology, Sri Lanka-based NGO Sudeesa (formerly known as the Small Fisheries Federation of Sri Lanka) and the government of Sri Lanka announced a joint program that makes Sri Lanka the first country in the world to grant full protection to all its mangrove forests.

Mangroves are widespread communities of evergreen plants and trees found in more than 120 tropical and sub-tropical countries, but they make up less than half of one percent of forested area worldwide. Taken together, some 70 species of mangroves found in these countries and territories occupy an area only slightly larger than Nepal (152,000 square kilometers). They have strong, stilt-like roots called pneumatophores that help them “breathe” as they are adapted to grow in some of the world’s most unique aquatic conditions – in saline seawater and in brackish water found in swamps, coastal areas or deltas.

Mangroves are considered by scientists to be one of the world’s most at-risk habitats. Over the last 100 years, it is estimated that the world has lost over half of its mangrove forests, with Sri Lanka losing 76 percent. According to the forest monitoring platform Global Forest Watch, the world lost 1.38 percent of its mangroves from 2000 through 2012. 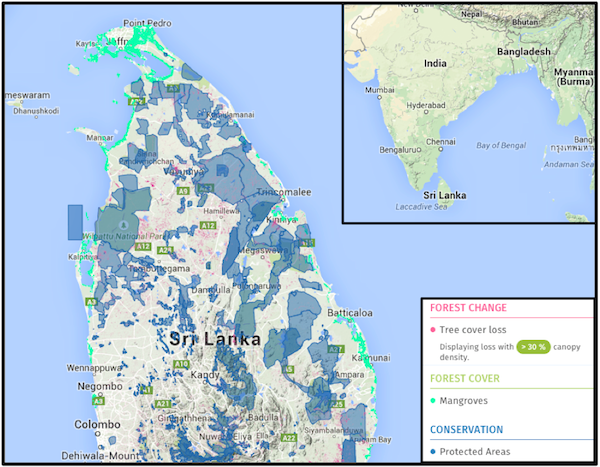 Until now, Sri Lanka’s mangroves have been largely unprotected from forest clearing. Global Forest Watch data show that in total, the island nation lost 1.5 percent of its tree cover from 2001 through 2013. Click to enlarge.

The project announced at the May press conference is estimated to cost $3.4 million over the next five years. It will protect all 8,815 hectares of Sri Lanka’s mangroves by providing alternative job training and microloans to 15,000 women from impoverished backgrounds who live in 1,500 small communities adjacent to the country’s mangrove forests. The project also includes replantation of over 3,800 hectares of mangrove forests that have been cut down. The communities receiving the microloans to help them start their own small businesses will, in exchange, be responsible for protecting the mangroves. A first-of-its-kind mangrove museum will also be constructed as part of this project.

The government of Sri Lanka will oversee demarcations and gazetting of mangrove forests and provide legal protection as well as rangers to patrol these forests.

“It is the responsibility and the necessity of all government institutions, private institutions, non-government organizations, researchers, intelligentsia and civil community to be united to protect the mangrove ecosystem,” stated Sri Lanka’s President, Maithreepala Sirisena.

Seacology, a U.S.-based nonprofit, has been working on putting this project together for over two years, according to its Executive Director, Duane Silverstein. “We believe that it will serve as a model of protection of mangrove forests and the blue carbon they harbor for other nations to emulate,” he said.

“No nation in history has ever protected all of its mangrove forests and Sri Lanka is going to be the first one to do so. This is through a combination of laws, sustainable alternative incomes and mangrove nurseries. It is also very significant considering the importance of mangroves as a means of sequestering carbon,” Silverstein said.

One of the greatest ecosystem services offered by mangrove forests around the world is their ability to not only sequester more carbon than other types of forests, but also their ability to sequester that carbon over a longer period. As a result of surviving primarily in an anaerobic environment without oxygen, the organisms that usually lead to the decomposition of organic material are not present, which keeps carbon locked up in the environment for longer. Moreover, because of the kind of habitat and the lack of readily available fuel, mangroves are also not susceptible for forest fires.

Mangroves are also excellent barriers that protect coastal settlements and shores from the impact of waves, erosion, tsunamis and storms. An IUCN report published 12 months after the devastating tsunami of 2004 compared two coastal villages in Sri Lanka that were affected by the disaster. Two people died in the settlement with dense mangrove and scrub forest, while up to 6,000 people died in the village without similar vegetation. Airplane view of coastal mangroves in the Bocas del Toro region of Panama. Photo by Rhett A. Butler.

“After the 2004 (Indian Ocean) tsunami, it became evident – particularly in Sri Lanka which was severely impacted – that those villages that had intact mangroves suffered significantly less damage that those that did not,” Silverstein said. “Another advantage of a healthy mangrove ecosystem is that the stilted root systems serve as nurseries for many of the fish species that go on to populate coral reefs.”

Mangroves help sustain healthy fish populations which, in turn, support the sustainable livelihoods of and provide nutrition for millions of small-scale fishermen and their families for multiple generations.

“We are thrilled to play a part in this groundbreaking effort that not only protects Sri Lanka’s mangrove forests but also helps some of Sri Lanka’s poorest citizens find sustainable livelihoods,” said Chairman of Sudeesa, Anuradha Wickramasinghe.

“People live in these areas because they depend on the mangroves because a lot of the fish they catch, come from mangroves,” he said.

Although mangrove displacement is not new, Sri Lanka ‘s protection precedent is coming at a time when the ecosystem is facing threats from many different directions.

A November 2012 United Nations report warned that growing demand for shrimp means increasing pressure on mangrove forests, which are felled to make room for farms. Farmed shrimp accounts for more than half of the global demand for crustaceans.

“Shrimp farming results in a significant fall in fish catch yields, so fishermen are losing income so it costs them their livelihoods,” Wickramasinghe told the BBC. “So they know about the importance of mangroves and they are keen to protect them.” 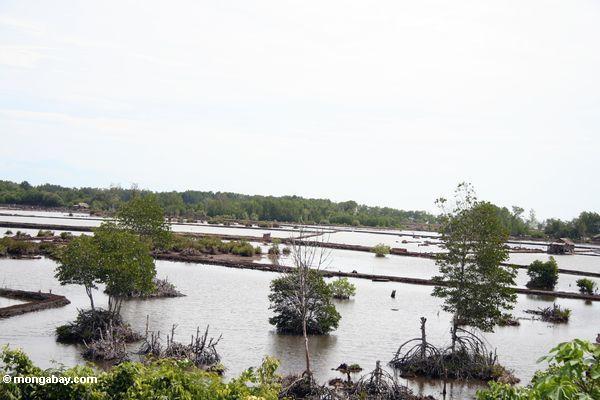 Mangroves cleared for settlement and shrimp farms in Sulawesi, Indonesia. Photo by Rhett A. Butler.

“Such large-scale conversion has had major negative environmental impacts, including collapses in wild fisheries. In a region where fishing in and around mangroves is a critical activity providing food and income for millions of people, the socio-economic impacts of this conversion have been tremendous,” said Van Lavieren, Coastal Zones Programme Officer at UNU’s Canadian-based Institute for Water, Environment and Health.

Mangroves are also threatened by other anthropogenic activities like over-harvesting, deforestation, agricultural and industrial runoff, oil spills and coastal development.

“These practices continue to take their toll and if left unchecked will cause significant economic and ecological decline,” Mark Spalding, Senior Marine Scientist at The Nature Conservancy, said in a release. Spalding is also a co-author of a report on the effects of climate change on coastal ecosystems, finding five to 20 percent of coastal wetlands, including mangroves, will be lost to sea-level rise by 2080.