Coral reefs are the gardens of the ocean. Covering just a tiny fraction of the vast sea floor, they are among the most biodiverse ecosystems on the planet. However, global warming and ocean acidification increasingly threaten them.

Now scientists have discovered that corals could potentially survive global warming by numbering among the Earth’s first climate change refugees. They could flee warming oceans to find a new home in the shade beneath coastal mangroves, says a recent study published in the journal Biogeosciences.

“Coral reefs are essentially spawning and nursery grounds for thousands of marine animals, helping sustain many of the world’s fisheries, and are home to more than 4,000 species of fish.” Dr. Michael Webster, executive director of the Coral Reef Alliance, told mongabay.com. 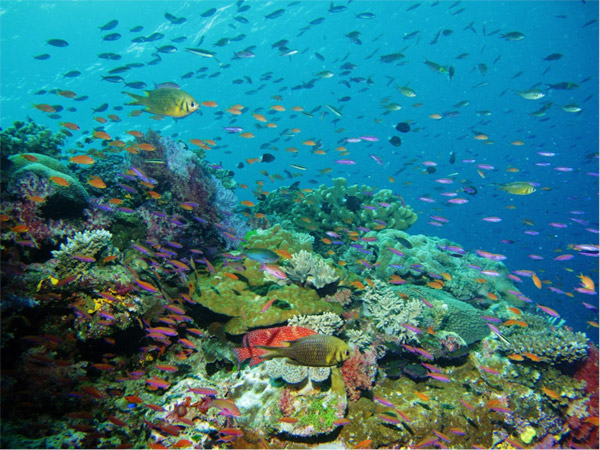 Coral reefs, such as this one in Fiji’s Namena Marine Reserve, support about a quarter of all known marine species. Photo credit: Coral Reef Alliance.

With sea temperatures rising, and increasing CO2 levels causing acidification of oceanic waters, coral bleaching events are regularly leaving large sums of dead coral in their wake. An estimated 90 percent of the world’s reefs will be at risk by 2030, rising to 100 percent by 2050, if current worst-case forecasts play out.

Bleaching occurs when a coral’s surrounding conditions change: warmer ocean temperatures, a drop in nutrient intake or a change in light exposure can cause the coral to expel the algae (zooanthellae) that dwells within its tiny calcium carbonate caves. The algae gives coral its beautiful coloration and also provides nutrients under normal conditions; when the algae is lost the coral turns a ghostly bleached white.

Bleaching events often result in the exodus of sixty to ninety percent of a coral’s zoolanthellae mass. Although such events are extremely damaging there is a chance of recovery. However, if conditions don’t stabilise the coral dies. 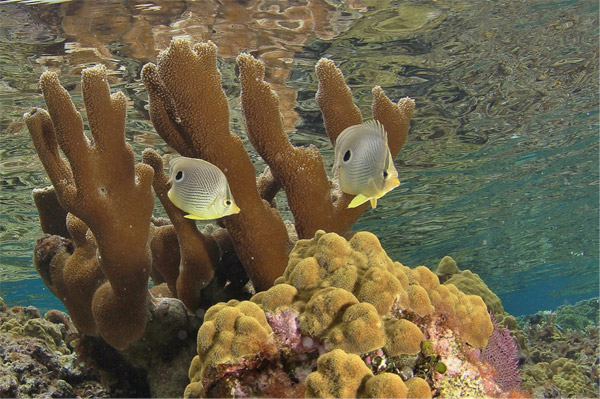 A pair of foureye butterflyfish swim on a coral reef off the coast of Roatan, Honduras. Photo credit: the Coral Reef Alliance.

In a race against time, scientists are seeking to identify non-reef systems that can protect coral species from climate change. “Repeated bleaching events and ocean acidification…[have] prompted an urgent search for coral reef systems that provide natural refuges from climate threats, ” the authors write. “Alternative shallow-water refuges… may be critical for insuring the survival of coral species.”

Several reef sites have been recognized globally as potential coral refuge sites. A recent study identified five potential sites in the Indian Ocean, and a further seven in the Pacific, ocean areas that may not be subject to sea temperature rise, possibly allowing coral to survive unscathed until 2100.

Elsewhere, corals in the Pacific islands of Palau found refuge under “suspended particulate matter.” In the Society Islands low cloud cover allowed corals to escape harmful sun rays during the deadly 1998 coral bleaching episode, one of history’s worst so far. But aside from these and a few other isolated examples dotting the world’s oceans, few promising refuge sites have been found.

Until now. Professor Kimberely Yates, of the U.S Geological Survey, and her team located the first non-reef coral refuge, and they found it in a surprising place. Previous research had dismissed coastal mangroves as a potential coral refuge due to this ecosystem’s high sediment levels, poor water quality and lack of structures for coral to cling onto.

However, Yates and her team, in the first study ever dedicated to mangrove-coral habitat, found that these coastal enclaves may in fact offer a high level of shelter. Enough to label them a refuge. This conclusion is based upon the resilience of coral species currently living under the mangroves of the island of St John in the U.S Virgin Islands.

The team undertook coral surveys between November 2010 and January 2011, in a bay of an island called Hurricane Hole. They found significantly less bleaching among corals sheltered beneath mangroves.

“The fact that C. natans occurred statistically more often in the shade and that few of these colonies bleached supports the role of shading in providing refuge conditions,” The researchers concluded. The scientists also learned what mangrove-corals hang onto for support: 33 scelatarian coral species, also called hard corals due to their skeletal structure, were found attached to mangrove prop roots. 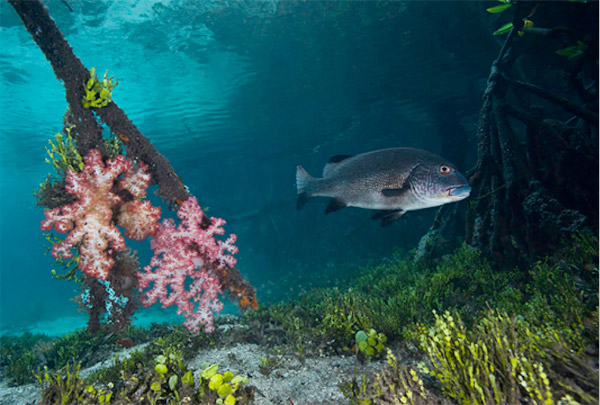 This discovery left the scientists with the question of specifically how mangrove habitat supports coral growth, despite previously being deemed unsuitable. Mangroves essentially act as a safe port of call for coral fleeing from changing ocean conditions. They offer shade from harmful UV radiation.

They also provide a measure of seclusion from ocean waters impacted by acidification and from the increasing temperatures found in the open waters of coral reefs. This non-uniformity of mangrove coral habitat, or “heterogeneity in the physical environment provides for semi-isolation of coastal water masses… enabling local differentiation of physical, chemical, and biological attributes of coastal ecosystems,” says the study.

Put simply, mangrove waters remain “out of equilibrium” with the ocean beyond, ensuring the coral beneath avoid the harsh temperature and acidification extremes brought by climate change.

“Our findings identify the first naturally existing, alternative refuge from climate change for reef-building corals,” the researchers write. “[M]angrove-coral habitats provide evidence of ecosystem transition that may be a response to pressures from unprecedented rates of recent climate change.”

Dr. Webster of the Coral Reef Alliance acknowledges that, in light of this ground breaking study, “A large-scale solution for coral reef conservation should include the full range of habitats where corals are found.” The Coral Reef Alliance works to involve communities around the world in coral conservation. “This research highlights mangroves as coral reef environments that need to be included in the areas we protect.” 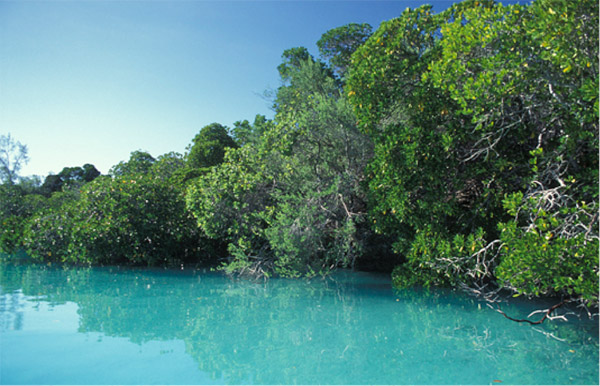 Mangroves in the Seychelles. Since the 1980s between 20-35 percent of mangroves have been destroyed worldwide Photo credit: ©David Hall / seaphotos.com

“Protecting a diverse set of environments and coral species is going to be important to the future of reefs,” Webster adds, “so that corals have enough genetic variability to be able to adapt to future changes… Therefore, mangroves should be included in regional plans for coral reef protection.”

Now that the first coral non-reef refuge from climate change has been identified, the search goes on to discover other such sanctuaries. As the world continues to warm and oceans to acidify, the task of ensuring a future for mangroves and other coral safe havens grows in urgency and importance.