The reputation of oil palm business group Sawit Sumbermas Sarana (SSS), a holding of one of Indonesia’s richest men, has in recent days taken hits on multiple fronts, with a pair of NGOs separately accusing the firm of violating various sustainability commitments it is party to.

The criticism highlights holes in both the Indonesia Palm Oil Pledge (IPOP), a high-profile sustainability pact to which palm giants Wilmar, Golden Agri-Resources (GAR), Musim Mas, Asian Agri and Cargill as well as the Indonesian Chamber of Commerce (Kadin) are signatories, and the Roundtable on Sustainable Palm Oil (RSPO), an eco-certification initiative that requires companies to abide by certain social and environmental criteria when opening up new lands for plantations.

Last week, Greenomics-Indonesia said in a report that an SSS subsidiary named Kalimantan Sawit Abadi (KSA) was clearing forested peatlands and orangutan habitat in Central Kalimantan province, in breach of no-deforestation commitments by its customers Wilmar, GAR, Musim Mas and Asian Agri, all of which have pledged individually as well as through the IPOP to purge their supply chains of deforestation. 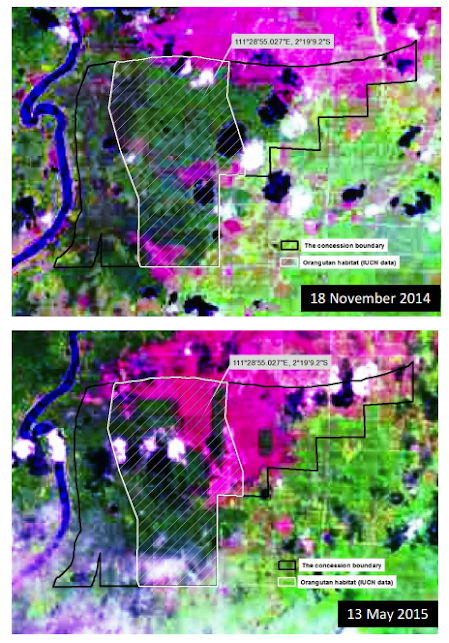 Then this week, UK-based NGO the Environmental Investigation Agency (EIA) lodged a formal grievance with the RSPO about a different SSS subsidiary. The complaint accuses Sawit Mandiri Lestari (SML), another developer in Central Kalimantan, of failing to consult communities with a stake in the land it meant to clear and failing to properly identify high-conservation value (HCV) lands for set-aside purposes, as required by the RSPO, a voluntary standard which SSS has chosen to join.

Neither had SML properly completed its legally mandated Environmental Impact Assessment (AMDAL) or obtained several required government permits, according to the EIA.

“This is unfortunately yet another case of a palm oil company riding roughshod over regulations and the rights of indigenous people in the area concerned and resorting to a variety of dirty tricks to do it,” EIA forest campaigner Tomasz Johnson said in a statement.

SSS did not respond to multiple requests for comment.

RSPO spokesman Stefano Savi told Mongabay that the RSPO would review the documents and meet with the EIA and SSS to encourage them to resolve the dispute on their own, as per RSPO procedure. Failing that, the case is tentatively scheduled to come before the RSPO’s complaints panel on July 29.

In an email to Mongabay, a GAR spokesman said it was “suspending all new purchases [from SSS] until these allegations have been thoroughly investigated.”

Wilmar said that following an earlier Greenomics report on SSS, it had suspended its dealings with the company pending the latter’s completion of a high-carbon stock (HCS) assessment, after which Wilmar had “reinstated buying, albeit in small quantities.” (The term “HCS” generally refers to any forest more robust than shrubland and marks the IPOP companies’ cut-off point for “deforestation.”) The spokesman did not address Greenomics’ finding that the supplier had continued to clear HCS forest through at least May 13, the date of the most recent satellite imagery provided in the report.

Musim Mas said it had not sourced SSS “for the whole year of 2015.” Asian Agri did not respond to a request for comment.

Kadin’s Dharsono Hartono said the relevant IPOP companies “have engaged or are engaging [SSS] on a one to one basis” in order to bring it in line with their commitments.

“Achieving our pledge is a journey that we are currently taking together with our suppliers,” Dharsono told Mongabay. “Our aim is to ensure that the deforestation-free [belief] is also practiced by our suppliers in conducting their business practices. It is a journey that requires resilience as well as patience from both parties in together achieving this shared objective.”

The Forest Trust (TFT), a nonprofit that helps companies run responsible supply chains and which last month suspended its cooperation with GAR’s plantation arm because of frequent policy breaches, said in vague terms that it was “actively engaging” its partners “to discuss these findings” and would issue a full update by June 17.

Greenomics highlighted some IPOP companies’ practices of making advance payments to SSS without, it said, “first conducting assessments so as to ascertain the extent to which the operations of such suppliers comply or conflict with IPOP.”

“It would appear that IPOP is devoid of monitoring and protocols,” Greenomics added. The EIA pointed to similar deficiencies with the RSPO. Since the beginning of 2010, when the RSPO’s New Planting Procedure (NPP) took effect, all new land clearing has had to be preceded by an HCV assessment and a social and environmental impact assessment (SEIA) by RSPO-approved assessors. In its NPP submission, SML’s auditor, Sonokeling Akreditas Nusantara, described a series of consultations it said took place with affected communities in the form of both “in-depth interviews” and focus-group discussions.

When the EIA and its local partner, the Independent Forest Monitoring Network (JPIK), visited the communities, however, they found that Sonokeling had either mischaracterized the nature of the consultations or that they had not taken place at all.

The NGOs also discovered a variety of inconsistencies pertaining to Sonokeling’s HCV classifications. For example, Indonesian law prohibits the clearing of areas in which the incline is more than 40 percent. In SNL’s concession, Sonokeling identified 4,567 such hectares; yet, the audit quantified only 2,837 hectares as “mountains.”

“The problem is that there is no scrutiny of the work that the auditors are doing,” Johnson told Mongabay. Such audits, he added, are generally “either weak in quality or outright fraudulent. … So the credibility or efficacy of the RSPO is entirely reliant on NGOs like LinkAR, SOS, FPP and EIA to look at what’s actually happening and try and enforce the standard. If we don’t do it, any number of sins will just get rubber stamped and greenwashed.”

SSS was founded by Abdul Rasyid, listed by Forbes magazine last year as Indonesia’s 41st richest person. Much of his $805 million fortune is said to have been built on widespread illegal logging.