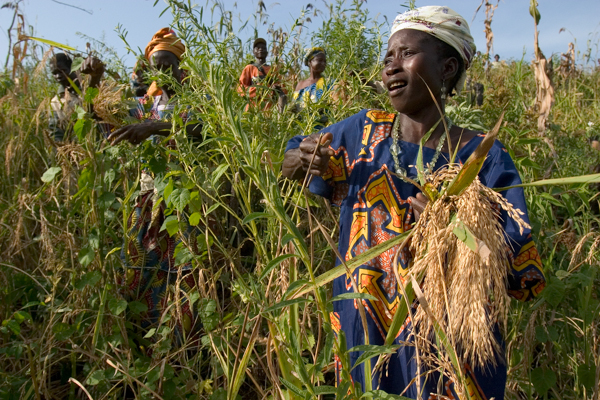 Villagers harvest rice in Sierra Leone. Harvesting is often a communal affair in West African nations, but the Ebola crisis interfered with group activities and disrupted many other aspects of agricultural production in the region. Photo credit: ©FAO/Peter DiCampo.

Pedelers Salee Craig used to grow vegetables. Near his home in Monrovia, Liberia, he planted peppers and bitter balls, potatoes and okra. A sturdy 39 year-old man with cheeks etched from former smiles, Craig is passionate and generally optimistic.

But he’s not smiling when he talks about the situation in Liberia now. Typically, farmers work to gather crops communally, harvesting together until the season is over. But in 2014, the Ebola crisis restricted travel.

“Everyone was afraid of each other,” Craig said. Mandatory government quarantines trapped people within their homes. As the disease spread, fields went unharvested and soon lay fallow.

Now, more than a year after the Ebola crisis began, Craig still can’t plant crops. “We have consumed almost all of what we kept to plant for the next season,” he said. “If we don’t have seeds, I can’t do anything for next farm season. And because we did not plant, we cannot sell. So the problems have multiplied.”

Liberian agriculture had been on the road to recovery after intermittent civil war from 1989 to 2003. Craig worked as an organizer during the years of conflict, and in 2000, helped start the Lofa Education and Agriculture Foundation (LEAF) to increase food access in camps for the displaced. “We entered into contracts with landlords around camps and began to organize farms,” Craig said. “We gave more than 10,000 people land to grow vegetables. We gave them existence.” Before the Ebola outbreak, Liberia was slowly regaining stability, but it was still ranked as the world’s fourth poorest country.

The outbreak, which is believed to have begun in Guinea in March 2014, infected nearly 27,500 people and killed over 11,000. But even though Ebola is now largely under control — there were only 20 new cases confirmed in the region last week — the chaos caused by the disease made it much more than a public health issue. Farmers, who are central to West African economies, suffered, and the effects have hampered the region’s efforts to recover from the disease.

“Agricultural activities were affected along the entire value chain,” said Kenyeh Barlay, a member of the Agriculture and Food Security Programme Unit of the Mano River Union, an intergovernmental institution of Sierra Leone, Liberia, Guinea, and Cote d’Ivoire. “Some families lost able-bodied members through death, and others, due to the panic, abandoned their farms.”

In the most productive agro-ecological areas, where the outbreak was the worst, Barlay said 90 percent of farm plots now remain uncultivated.

In December 2014, the UN Food and Agriculture Organization (FAO) completed a survey assessing the situation and announced that half a million people in the region were “severely food insecure due to the impact of Ebola." They warned the number could increase to one million by March.

It’s not just that harvests were limited: a variety of factors contributed to the widespread food insecurity. During quarantines, classrooms were closed for months, airlines stopped flying to affected countries, and businesses closed. A World Bank report in January found that Sierra Leone is now facing a severe recession: its GDP growth rate declined over 7 percentage points, to 4 percent at the end of 2014. Liberia’s GDP fell from 5.9 percent before the crisis down to 2.2 percent by the end of 2014.

Although the impact of Ebola is difficult to overstate, it’s unclear how agricultural activity may begin to recover. The only detailed survey that experts consulted for this story could point to was a report from the Famine Early Warning Systems Network, released in January, predicting this year’s harvests in Guinea, Liberia, and Sierra Leone will be “average to slightly below average.”

But that’s not how it feels on the ground. Kyndy Kobbah, a physician’s assistant in Liberia said, “It’s not easy to get food. Rice is not enough.”

Kobbah, who was the first Liberian to receive the experimental Ebola drug ZMapp after she contracted the virus, lost her laptop and many other personal belongings in an ambulance while she was sick. She’s working again now, but her income isn’t sufficient to meet her family’s needs. “Food access is not getting better,” she said. “The focus has been on Ebola, Ebola, Ebola. But there’s more to the problems.”

In unstable areas, crises almost always result in increased food insecurity. The Ebola response did not anticipate this: For example, people were told to stop eating bush meat, but not provided alternative protein sources. Although the health care system was an obvious and appropriate priority, aid organizations usually conduct surveys to determine what other forms of assistance are needed — something that is just now beginning to happen in West Africa.

Gavin Macgregor-Skinner, Director of Global Disaster Response at Beth Israel Deaconess Medical Center in Boston and a consultant for the U.S. Centers for Disease Control and Prevention who worked on Ebola control puts it bluntly. “We sent the wrong people. We sent health professionals but not emergency managers, and we put the wrong organizations in charge,” he said.

Macgregor-Skinner said any disaster response, including the recent earthquake in Nepal, usually begins with a door-to-door household survey. “What do they need?” he said. “Critical systems break down very quickly. It’s a whole community approach. And it wasn’t done with Ebola.”

FAO is in the process of carrying out a region-wide assessment to count what has been planted this year, and expects to have results this month.

But for now, Craig, who previously worked with the organization in Liberia, said, “The FAO, they don’t know who is where.” Understanding how things work in Liberia, Craig said, is an important missing factor. “When you come to Liberia, you need to understand who you are working with,” he said, “You need to know the patterns and dialect.”

Marc Abdala, an FAO representative, explained that their budget is limited, “Priorities are understood, but between resources and needs there is a gap.” Craig puts it slightly differently. “Their strategies are decided without hearing from local partners,” he said, which means the crop assessment is “set to failure.”

The consequences of this absence of information may be huge: Deciding the best way to spend limited recovery funding is crucial. A substantial amount of international aid has arrived in the region — the World Bank has mobilized $1.62 billion for Ebola response and recovery and the U.S. government alone has contributed $1.69 billion, most of which went to health care systems. While healthcare is important, West African countries also need resources for agriculture, education, social protection programs, and infrastructure.

Macgregor-Skinner said, “Ebola happened locally. We’re starting to get data now, but we have to disaggregate to a local level. I haven’t seen a map like that anywhere. Where are the most vulnerable populations [that need aid]? We still don’t know.” The World Bank is distributing seeds in some areas, but until broad population data is available, it will be difficult to know who needs what.

For now, the majority of aid has been delivered to people in urban areas, where there is higher population density and greater potential for civil unrest. Rural areas have largely been left to fend for themselves. But that’s also the population needed to grow crops again; if rural communities are displaced, it will be even harder for the region to regain independence from outside support.

“The epicenter of the outbreak is the bread basket of the region,” said Jolene Mullins, the director in Liberia for the aid group Project International Concern, who stayed in the country during the outbreak. Although the mood in Monrovia last month was joyful as the country marked 42 days since the last new Ebola case, Mullins remained wary. “In Liberia, we haven’t touched each other in nine months,” she said. “We’re just starting to see the impacts, the people who left farms, the families who lost loved ones. We know Ebola is not done.”

For West Africans, even though the disease has largely disappeared from news cycles the problems haven’t gone away. Craig said that even though he’s comparatively well-off, with a computer and connections to the outside world, he’s concerned about the future. “I’m worried about my family. Who do I go to for help?,” Craig asked. “Everyone fends for themselves at a time like this.”

“It doesn’t feel like the crisis is over,” Craig said. “The crisis that Ebola has created has just begun.”