Into the great unknown: The ability of global forests to store carbon is at risk 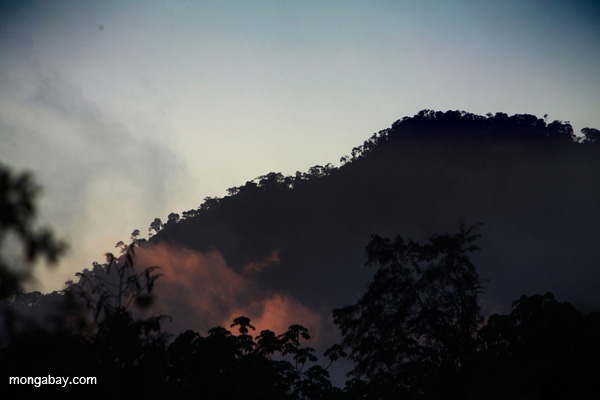 Though scientists are striving hard to discover how the world’s forests will respond to climate change – whether they will tip from being carbon sinks to being carbon sources – much remains clouded in mystery. Photo credit: Rhett Butler.

The world’s tropical and subtropical forests absorb 1.1 trillion kg. (120 billion tons) of carbon from the atmosphere every year, storing it in soil and living and dead biomass, according to USDA Forest Service researcher John Parrotta. Amazonian forests alone store more carbon than any other ecosystem on earth, estimated at 1.1 trillion kg. (120 billion tons). That’s important because any carbon that is stored in biomass is carbon not being released to the atmosphere and contributing to climate change.

Unfortunately, researchers still face huge unknowns when it comes to understanding the intricacies of carbon storage in the world’s forests. In some regions, for example, the amount of carbon sequestered in forests is offset, or even outweighed, by emissions from land-use changes such as deforestation and clearing.

This line between serving as a net carbon source and a net carbon sink is especially fine in the tropics and subtropics. In fact, between 1990 and 2007, carbon emissions from land-use changes in tropical and subtropical regions contributed roughly 100 billion kilograms (110 million tons) of carbon more to the atmosphere than the regions’ forests absorbed and stored, according to Parrotta’s research. 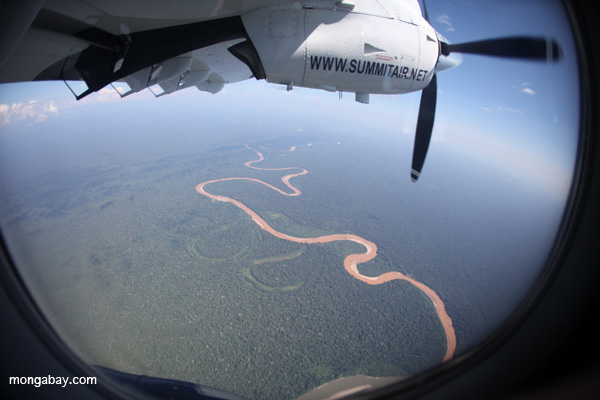 As climate change continues to impact ecosystems around the world, a critical question has confronted scientists: does maintaining or improving a forest’s biological diversity also enhance its long-term ability to retain carbon?

The connection is unclear at best, says Clinton Jenkins of the Institute for Ecological Research in São Paulo, Brazil. “People have tried to make the link, but I don’t think it’s there.” There are, he points out, many ecosystems which do lots of carbon storage but which lack biodiversity. Redwood forests, for example, store massive amounts of carbon but have relatively low diversity.

Adding to the complexity of the problem: when it comes to carbon storage, not all forest species are equal. A report this spring in Naturefound only a distant relationship between biodiversity and carbon storage, at least in the Amazon. Using a data set of 530 forest plots, the study found that only around 1 percent of tree species in the Amazon are responsible for half the forest’s carbon storage and productivity. Thus, even though the rainforest is extremely diverse, carbon sequestration there is concentrated in a handful of “hyperdominant” species.

Of course, this represents just one study, done in one forest type, at one moment in time. It’s important to keep in mind that these results – though important – are limited to present-day conditions and current sampling methods, notes study author Sophie Fauset of the University of Leeds. “Under future conditions, different [plant] species might be more suited to the environment,” and the hyperdominant carbon sequestration species could change.

That’s one reason why the preservation of the full suite of forest plants is an important hedge against a warming world. Rare species, Fauset says, can possess unusual combinations of functional traits, and hence could be important for long-term forest resilience. “Having a diverse species pool increases the chances of those suitable species being present” in the future, she says.

Abigail Swann, an atmospheric scientist at the University of Washington, agrees that solid scientific answers are still lacking regarding forest carbon sequestration. However, she does say that it is clear that functional diversity does make forests more resilient in a changing climate. And more resilient forests will continue to thrive and absorb carbon, while less resilient ones will die and become carbon sources adding to climate change.

Research currently under review supports the idea that forests with a diverse range of tree species suffer less mortality, and thus retain more living biomass as a whole, during stressful climate events. Dead biomass eventually releases carbon into the soil and atmosphere, a process that is hastened in the tropics.

“The question is how quickly [forests] might recover,” from stressful climate change events, Swann says, as well as what that recovery brings; tropical forests can regain biomass quickly during regrowth, but the regrowth may not have the forest’s original diversity. That changing forest mix will no doubt impact carbon storage and release and resiliency.

The mind-boggling complexity of a forest’s response to climate change can be seen in another recent study in Nature. Trees in the Amazon are dying faster, according to a 30-year survey by almost 100 researchers. Rising growth rates seen early in the study – due in part, ironically, to increasing levels of CO2 – leveled off and then started to decline over the past decade. During the most recent years, above-ground biomass fell by one-third compared to the 1990s, while tree mortality continued to increase, possibly because of more extreme climate events such as high temperatures and droughts, including an intense one in 2005.

The combination of an increase in tree mortality and decrease in biomass reduced this Amazon forest’s sequestration abilities: over the 30-year survey period its net carbon uptake fell from a high of 5.4 trillion kg. (6 billion tons) per year in the 1990s to 3.8 trillion kg. (4.2 billion tons) in the 2000s. 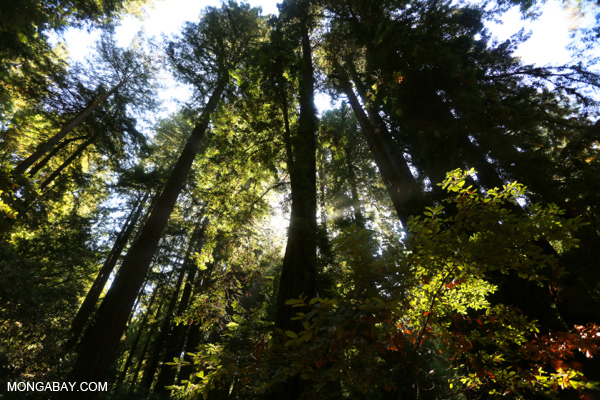 It seems intuitive that forests with high carbon storage will also have high biodiversity, but that isn’t always the case. Redwood forests like this one, for example, store massive amounts of carbon but have relatively low diversity. Photo credit: Rhett Butler

Such findings are extremely important to climatologists who create climate change models. The fact that climate change can cause any given forest to shift from being a carbon sink, to being a carbon source, is extremely important to global warming forecasts. However, it will take massive amounts of research and data to begin to track and project such changes in the world’s many forest types.

While we cannot say with certainty how any forest will respond to climate change, we can say with some assurance that the best way to prepare forests for a future in which they will be buffeted by extreme weather events is to maintain their biodiversity at the highest levels possible. High biodiversity improves resilience and protects a forest from mortality, which in turn prevents dying bio-matter from contributing to global warming.

From an ecological perspective, says author Roel Brienen of the University of Leeds, it is intuitive to assume that a larger list of more species protects a forest against the impacts of climate extremes, at least to some degree. “When the species pool is big and has a large functional diversity, then the chances of finding species that can resist newer higher temperature or more extreme drought regimes is higher, thus protecting the forest against such impacts.”

“It’s really about balance: making sure all species are present to provide optimal ecosystem functioning,” says Martha Stevenson, Director of Forest Strategy and Research for the World Wide Fund for Nature (WWF).

“The relationship between climate change and carbon fluxes in forests is very complex and region-dependent,” cautions Bronson Griscom, Director of Forest Carbon Science for the Nature Conservancy. The long list of climate change’s effects on ecosystems, and all the species living within them, can both raise and lower carbon accumulation, and there is a very long way to go before these many mechanisms and impacts will be thoroughly investigated.

However, scientists are beginning to understand some relationships. We do know, for example, that rising CO2 levels can increase growth rates and carbon storage for a time, while drought decreases storage by decreasing living biomass. Dry times also make forests more prone to fire, which in turn quickly releases large amounts of carbon to the atmosphere. While no one knows how a particular forest will respond to climate change in the long term, it’s likely that the best way to help forests thrive in a future buffeted by extreme weather is to maintain diversity at the highest possible levels. Photo credit: Rhett Butler.

One thing is certain: forest ecosystems do not exist in a laboratory. They are constantly bombarded by a large number of interacting stressors, including the extreme temperatures, drought and deluge brought by climate change; rapidly increasing atmospheric carbon; forest fragmentation; invasive species; the sudden decline of pollinators; insect damage and disease; wildfires; varying rates of air, water and soil pollution; as well as other human disturbances ranging from oil drilling to the creation of palm oil plantations. Any or all of these stressors – many of which are worsening in today’s forests – can potentially influence carbon sequestration in complex ways.

“Farmers and foresters are telling us things are getting more unpredictable,” concludes Richard Donovan of the Rainforest Alliance. Experienced voices on the ground are speaking up and warning of major threats to the world’s natural and working forests and to commercial agriculture. “If they’re telling you they’re worried, from Vermont to Brazil, I would be worried, and so should anyone who buys from them.”