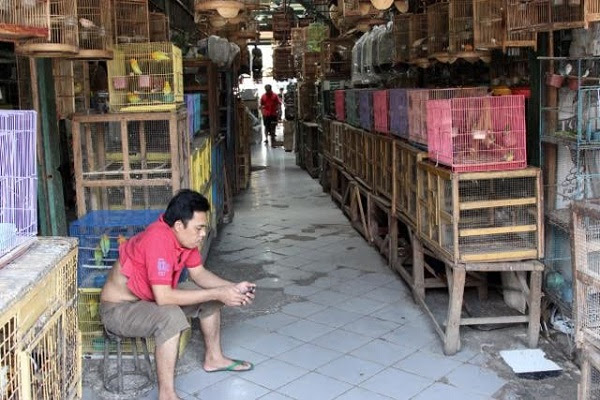 A vendor checks his phone at the Jatinegara bird market in East Jakarta. Photo: Harry Pearl

The Indonesian shop owner turns and motions to the back of the grubby, concrete-floor stall.

Beyond the boxes of chirping parakeets stacked four high, two bamboo cages hang from the low ceiling. Inside each is a chattering lory (Lorius garrulus), a forest-dwelling parrot endemic to North Maluku, which over the past 25 years has seen its population plummet by between 30 and 50 percent, according to Birdlife International.

The two parrots, each about 30 centimeters in length and mostly red, with green thighs and wings, bob mutely on their perches. In the wild, getting a glimpse of the noisy birds, which are classified as vulnerable by the International Union for the Conservation of Nature (IUCN), is increasingly difficult.

But in Indonesian markets like this, in gritty East Jakarta, they’re an all-too-familiar sight.

Indonesia is a global hub for the wild bird trade, given its abundance of bird species and deep-seated tradition of bird-keeping. The country boasts 1,615 different birds, 419 endemic species and 132 globally threatened birds.

“They supply the markets through massive poaching.”

At Jatinegara bird market in Indonesia’s capital, Jakarta, thousands of birds are crammed into wire and bamboo cages for sale. Here, buyers can purchase birds from across Indonesia, as well as Asia and Africa. Similar markets operate in other parts of Java, Sumatra and Bali; dirty and smelly places where dozens of threatened bird species are sold openly. Last month, 23 yellow-crested cockatoos and a green parrot were found crammed into plastic water bottles aboard a ship at a port in the Indonesian city of Surabaya. The endangered creatures are commonly kept as household pets in Indonesia. Photo: Petrus Riski

For decades, Indonesians — and particularly Javanese — have kept birds, which have come to signify status and peace of mind. A third of households in the six biggest cities of Java and Bali are thought to keep birds as pets, according to a study by Oxford University researchers in 2011.

Songbird contests, a phenomenon known as Kicau-mania, are also hugely popular, and supported by a thriving network of clubs, online forums and blogs. Weekly kicauan contests offer winners the chance to take home up to several thousand dollars. Prized songbirds can sell for more than $10,000.

“Through transmigration programs many Javanese people have spread across Indonesia,” said Muhammad Iqbal, one of Indonesia’s leading authorities on birds.

The scale of the caged-bird trade has long worried conservationists, and many ornithologists say the hobby is taking an unsustainable toll on Indonesia’s wild bird population. But the extent of its impact is hard to gauge.

“No organizations are conducting regular monitoring in markets and wild bird populations in the whole of Indonesia,” Iqbal said.

The costs of monitoring can be prohibitive, specialized scientific knowledge is often hard to come by, and there is not a strong popular culture of conservation in Indonesia, experts say.

A recent study of bird markets in Sumatra, however, seems to have confirmed a link between Indonesia’s thriving caged-bird trade and plummeting native bird populations.

Using market data and expert opinion, researchers from Princeton University found that commonly traded Indonesian bird species that increased in price but were harder to buy at markets showed declining populations in the wild.

Researchers also found that only five of 14 species the study classified as experiencing population declines were on the IUCN Red List, or listed as declining globally.

“Basically we have a clear imprint that the trade is affecting the birds, and we now need to try and figure out the ones that are declining,” said J. Berton Harris, one of the report’s co-authors.

For developing countries that are at the center of the world’s multibillion-dollar wildlife trade, but often lack the means to monitor wildlife declines, looking at market trends could be a way to accurately — and cheaply — gauge species declines.

However, experts in Indonesia say much more needs to be done to prevent extinctions. Several birds endemic to Indonesia that are highly valued as pets, such as the yellow-crested cockatoo (Cacatua sulphurea) and the Bali myna (Leucopsar rothschildi), are critically endangered. And there’s a chance more could follow.

“It is possible to identify the problems, but [it] looks impossible to make it halt,” Iqbal said.

“Having a bird as a pet is a tradition and sometimes shows the high class of people.

“In addition, wildlife crime is not really a priority for authorities, so you can see local bird markets everywhere in Indonesia.”

Dwi Adhiasto, of Indonesia’s Wildlife Crimes Unit, says while Indonesia does have laws prohibiting the trapping and trade of certain birds, law enforcement is weak.

“This is a big problem. Not only the traders, but poachers and illegal keepers should be punished under Indonesian law for [the trade of] protected birds.”