Less than three weeks after APRIL unveiled a sustainability policy that is supposed to protect natural forests, an environmental group is alleging that one of the Indonesian forestry giant’s subsidiaries is already breaching the commitment. But APRIL refuted the claim and says it continues to stand by the policy.

The controversy is centered in a concession run by PT Adindo Hutani Lestari (AHL) in North Kalimantan, Indonesia’s newest province, on the island of Borneo. According to Global Forest Watch, three quarters of the concession consists of degraded primary forest, much of which is classified as “deep peat” — peat swamp deeper than three meters.

Data from Global Forest Watch shows that Adindo has dramatically scaled up forest clearing in recent months, after clearing some 5,000 hectares between 2011 and 2013. The dispute is over the timing of the clearance. APRIL set a May 15, 2015 cut off for ending deforestation. 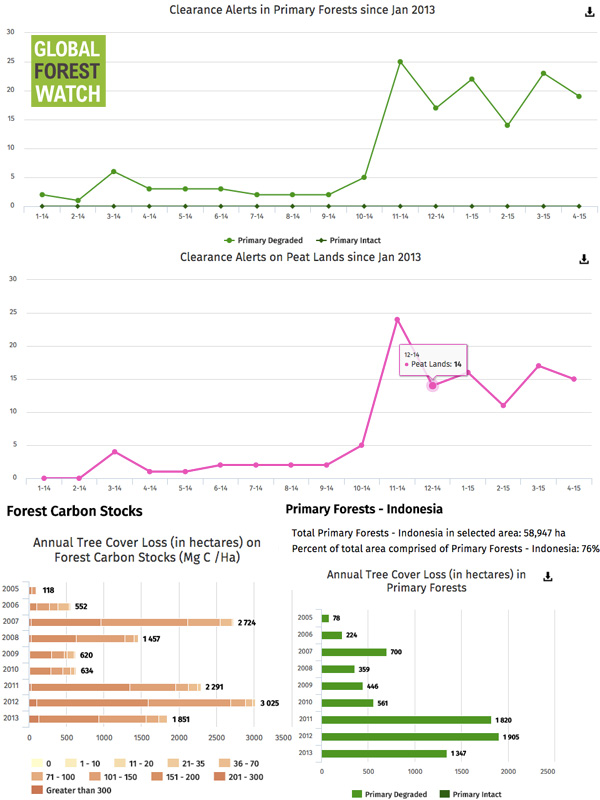 Global Forest Watch data for the Adindo Hutani Lestari (AHL) concession at the center of the controversy.

Eyes on the Forest, a coalition of Indonesian environmental groups coordinated by WWF-Indonesia affiliates, alleges that Adindo continued to chop down peat forests after the May 15 cutoff date.

“Landsat satellite images of the PT Adindo Hutani Lestari (AHL) concession taken on 16 and 24 May and 9 June show forested peatland being cleared after 15 May 2015, the day by which APRIL promised to halt all their suppliers’ forest clearance,” Eyes on the Forest said in a statement. “The clearing violates APRIL’s SFMP 2.0 released just a few weeks ago in which the group promised that it ‘will not undertake any new development on forested land or forested peatland.'”

Eyes on the Forest adds that the activity also violates APRIL’s 2014 commitment and a law barring conversion of deep peat. Global Forest Watch data suggests that some of the recent clearing breaches Indonesia’s Forest Moratorium.

But APRIL told Mongabay that trees in the area in question were felled prior to May 15.

“It’s important here to note… that while harvesting would halt on 15 May 2015, extraction and land clearing would continue until the end of the year at the latest,” an APRIL spokesperson told mongabay.com. “The specific areas highlighted by EoF late last week had been classified by Adindo as ‘felled’ areas as at 15 May 2015.”

“Based on our experience, we are aware that though an area may be harvested, it will still appear ‘green’ on maps till the area has been cleared or until the scrub has browned.” 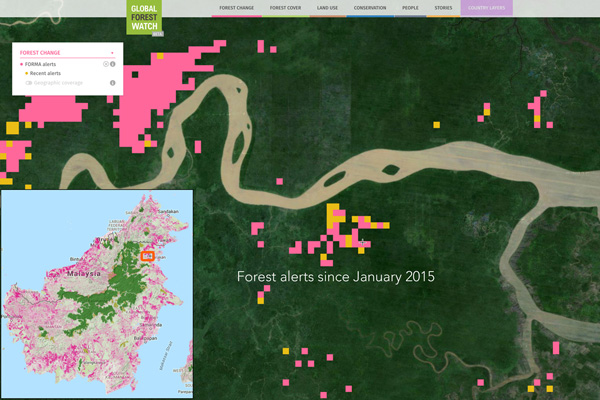 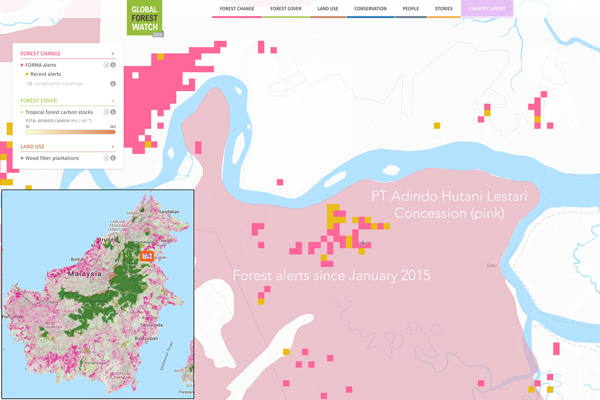 Nonetheless APRIL said it has asked PT. Hatfield Indonesia, a mapping consultant, to conduct further analysis of the points highlighted by Eyes on the Forest. It expects the analysis to be completed by the end of the month.

The pulp and paper giant, which has been the target of campaigners for long-running conversion of peatlands and rainforests in Sumatra for industrial acacia plantations, reiterated that it remains committed to its policy.

“We take this matter seriously and are working hard across our concession to implement the strengthened commitments announced in SFMP 2.0 on 3 June,” said APRIL. “The bottom line is that we have committed to halting the harvest of non-plantation supply and are accelerating towards our 1-for-1 plantation to conservation commitment.

“We would add that there are compartments in this area not harvested, as work was not completed prior to the cut-off date. The Hatfield analysis will clarify this and this is land will be added to our conservation area. If there is proven, as a result of Hatfield’s analysis, to be any process error among any of our suppliers across our concession on or around the cut-off date, we will take the appropriate steps to rectify immediately.” 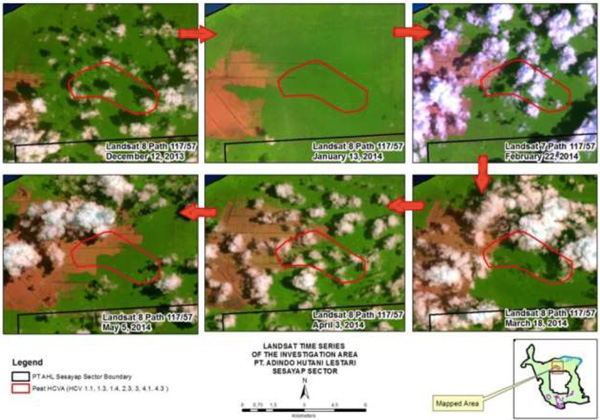 Landsat analysis released by Eyes on the Forest. The analysis shows forest loss in AHL’s concession between December 2013 and May 2014. The report says 290 hectares of high conservation value forest are identified within the red boundary. 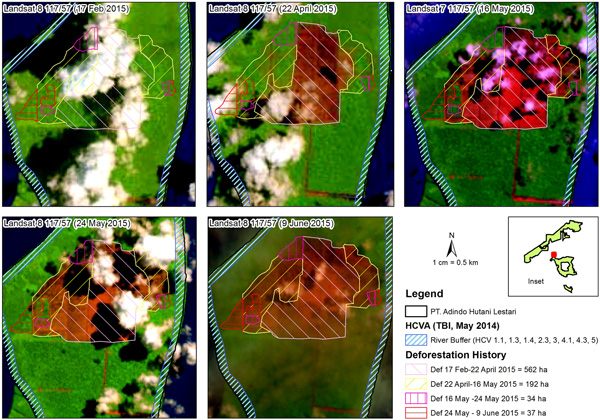 However despite APRIL’s reassurance, Eyes on the Forest maintains that since the beginning of last year AHL logged an area that had previously been categorized as having high conservation value, which the company previously committed to protect.

“Our field investigation between 17 and 25 April 2014 discovered AHL to be still clearing natural forest, even a small High Conservation Value Forest identified by Tropenbos for protection, in its Sesayap Sector concession of 63,700 hectares,” stated Eyes on the Forest.

“The peat depth in the area where AHL continued to clear natural forest is estimated to be more than 4 meters deep,” said the group. “Based on the Government Regulation PP No. 26 Year 2008 on National Spatial Planning, the area is protected and no forest clearance is allowed.” 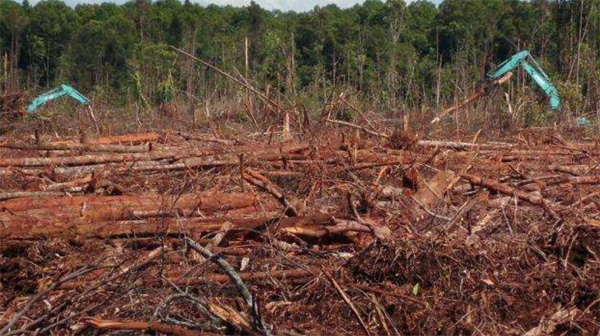 Greenpeace, which suspended its campaign against APRIL earlier this month after the new forestry policy was released, also expressed concern about the situation.

“Under the new commitment there no way for APRIL to continue forest clearance per 15 May 2015 including in Adindo concession,” Bustar Maitar, the Global Head of Indonesia Forest Campaign, told Mongabay. “We urge APRIL to investigate about this claim and publish openly the result. Greenpeace will investigate on this case and if true, then APRIL should take immediate action to their supplier on this breach.”