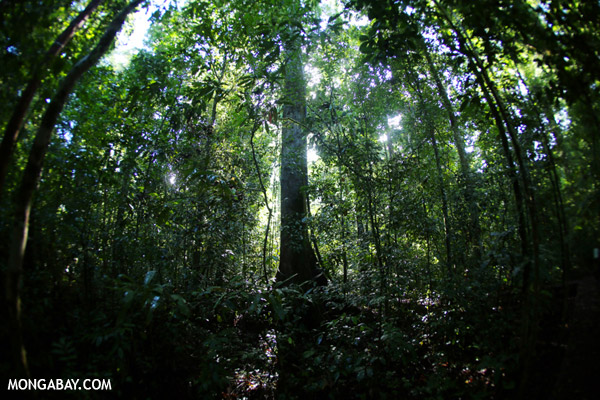 Negotiators at U.N. climate talks in Bonn, Germany, have produced a draft agreement on the technical provisions of a plan to reduce emissions from deforestation and forest degradation. Known as REDD+, the forest conservation plan is now far more likely to be included in a climate deal to be negotiated in Paris this December, thanks to the breakthroughs made in Bonn.

The fact that a complete REDD+ draft was agreed to in Bonn came as a bit of a surprise to many observers of U.N. climate negotiations, which are notorious for proceeding at a glacial pace. Some particularly difficult issues needed to be resolved, and it seemed likely that settling them would be left to the Paris talks — even countries fully in support of REDD+ want every bargaining chip they can get.

Washington, D.C.-based conservation non-profit Forest Trends said in a statement that expectations were low even though negotiators have worked hard for over a decade to reach the REDD+ deal. But there is still substantial work left to be done in Paris before REDD+ is ready to be put into action — mainly, figuring out how the whole program will be financed and implemented on a large enough scale to effectively halt deforestation and lower global emissions.

“While REDD+ is finished on paper, the Paris global deal must provide the policy certainty to implement REDD+ on the ground,” Forest Trends’ Gustavo Silva-Chávez said in the statement. “REDD+ must be able to generate significant amounts of finance to REDD+ countries, do so with environmental integrity, and contribute to reducing global greenhouse gas emissions as rapidly as possible.”

REDD+ would direct billions of dollars from developed countries to developing countries via multilateral organizations like the Forest Carbon Partnership Facility, the Forest Investment Program, and the United Nations Collaborative Initiative on Reducing Emissions from Deforestation and Forest Degradation in Developing Countries (aka UN-REDD).

But first the money has to make its way through the various bureaucracies in the donor countries, and then through another set of departments and agencies in the recipient country, before finally finding its way to forest conservation activities on the ground. All those steps have to be tracked and measured to ensure the money is actually being spent to reduce emissions from deforestation and forest degradation. Hence the need for a thorough set of guidelines and methodologies, which is what the REDD+ draft agreement finished in Bonn represents.

There were essentially three issues that were left to be decided in Bonn by the Subsidiary Body for Scientific and Technical Advice, a permanent subsidiary body of the UN Framework Convention on Climate Change (UNFCCC) that was created to provide information and advice on scientific and technological matters.

One was the quality and type of information forested recipient countries are required to report about how they’re implementing safeguards for indigenous rights and biodiversity. Brazil, which had been the main impediment to an agreement on safeguards, apparently decided it would rather not let the issue drag out until the December talks, according to Reuters.

Ecosystem Marketplace, a Forest Trends website providing news and analysis that has been following the REDD+ negotiations closely, reports that a compromise agreement was reached on another of the issues, payments for non-carbon benefits of protecting forests, such as the preservation of watersheds and biodiversity. Until now there has been no official guidance document describing how to account for these additional benefits, so the issue has typically been handled on an ad hoc basis.

The third issue had to do with whether or not non-market mechanisms could be used for REDD+ payments. In the end, the final draft text leaves the door open to both market-based approaches as well as non-market approaches — direct transactions between an entity looking to offset its emissions and whoever is doing the work on the ground that is being funded. This way, countries can choose whichever approach they prefer.

Some UN observers are critical of the REDD+ draft agreed to in Bonn. Christoph Thies, a forest expert with the conservation group Greenpeace, says some of the technical details are weak. “That’s better than no agreement, but nothing to celebrate, as long as financing for REDD+ is still unclear and implementation cannot go ahead on a big scale,” Thies told mongabay.com in an email.

But with these details hammered out, not only does REDD+ have a better shot at making it into the broader climate accord to be hashed out in Paris later this year, but it also lets countries incorporate REDD+ into their national climate action plans, or Intended Nationally Determined Contributions (INDCs), as they’re called in UNFCCC parlance.

None of the big emitters that have submitted INDCs so far, like the U.S., have used REDD+ to meet their reduction targets. But then just eleven countries, plus the EU, have submitted their INDCs.

The fact that all countries can head into the Paris talks with a complete draft of REDD+ in hand is being viewed as a good sign to those who are watching the UNFCCC negotiations with cautious optimism.

“I think this will increase the confidence of everybody — both donors and the forest countries — that REDD can be done in a transparent and inclusive way with environmental credibility,” said Duncan Marsh, Director of International Climate Policy at The Nature Conservancy, according to the Ecosystem Marketplace story. “The fact that countries in these REDD negotiations were able to get to an agreement here two days before the conference ended is a great signal for Paris.”

The author, Mike Gaworecki, was an employee of Greenpeace ending in 2010. A current Greenpeace employee is quoted in this story.