Catch a whiff? Device aims to reveal age, gender, and identity of endangered wolves from the scent of their poop 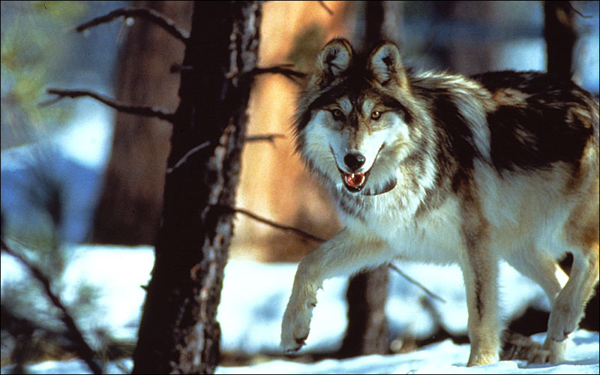 A Mexican gray wolf waits in a pen before being released to the wild. Photo credit: Arizona Game and Fish Department.

Wolves use their noses to track their quarry by its scent. Now a scientist is turning the tables, building a handheld device that analyzes the odor of wolf scat to determine the age, gender, and individual identity of the animal that left it.

The goal is to improve estimates of the size and demographics of endangered Mexican gray wolf populations, and ultimately to help bring back the wolf and restore greater balance to the forests of the southwestern U.S. and Mexico.

The Mexican gray wolf (Canis lupus baileyi) is “the smallest, southern-most occurring, rarest, and most genetically distinct subspecies of gray wolf in North America,” according to a U.S. Fish and Wildlife Service (USFWS) website.

By the 1970s the subspecies had nearly been wiped out throughout its native range. An intensive eradication effort targeted the wolves after they began attacking livestock when their natural prey populations declined as cattle and sheep ranching took hold in the region. After wolves were listed as endangered under the U.S. Endangered Species Act, recovery efforts led to the first reintroduction of 11 captive-bred Mexican gray wolves to the wild, in 1998. 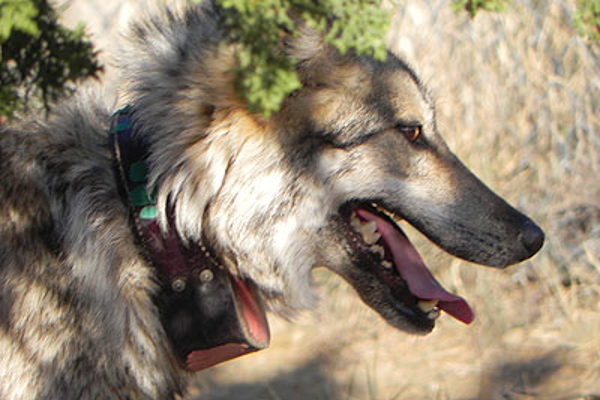 A female Mexican gray wolf, just before being transported to a release point in the Arizona wilderness. She had been brought into captivity for breeding, and was released, pregnant, with her mate, in April 2015. Photo credit: U.S. Fish and Wildlife Service.

Today there are about 110 wild Mexican gray wolves, most of them living in a roughly 6,000-square mile area of Arizona and New Mexico designated the Blue Range Wolf Recovery Area (BRWRA). Another 300 live in captivity. Estimating their population size and demographics is critical to the recovery effort, led by the USFWS. It isn’t easy, though: wolves are naturally elusive and roam large backwoods territories.

Enter Eric Burnham, a wildlife biologist at New Mexico State University who has spent time among wolves in Washington and Wyoming. When it comes to wolves, Burnham saw shortcomings in methods commonly used to study wildlife populations, he told mongabay.com.

Some of the wild Mexican gray wolves wear radio collars to track their location, but they’re bulky and putting them on requires capturing and sedating the animal, which is stressful for them and expensive for researchers. Determining a wolf’s age is even harder — researchers must sedate the animal and extract a tooth to analyze its rings — so it’s rarely done. 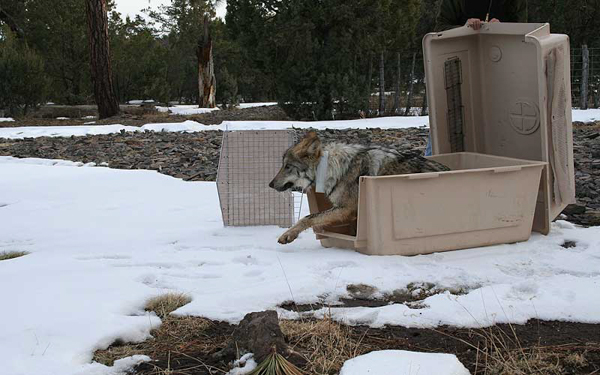 And while scientists have increasingly been turning to new noninvasive methods for studying wildlife, several important ones aren’t ideal for tracking wolf populations. Motion-triggered cameras have limited value because individual wolves can’t be identified visually. Genetic analysis of cells in hair or scat can be wonderfully informative, providing information about the animal’s individual identity as well as gender. But that approach is not foolproof and it is expensive — around $100 per scat, Burnham said. 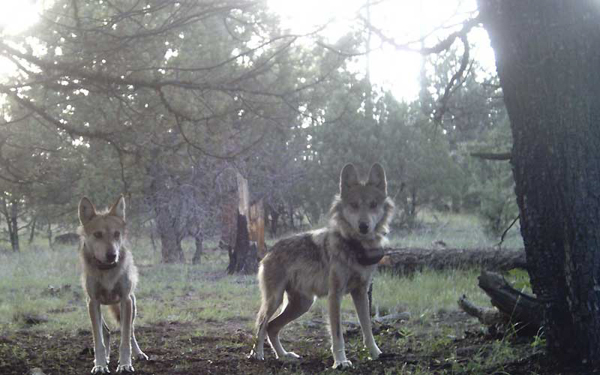 Burnham has conducted further research that has yet to be published, using scat from captive gray wolves. His method was able to identify individual wolves based on the unique chemical profile of their scat scent with 94 percent accuracy, he said. It could also accurately identify the gender of the wolf that made a given scat 89 percent of the time and the age 95 percent of the time, he said.

It takes about 90 minutes to produce a result, and it costs about $20 per poop — one-fifth the price of genetic analysis, according to Burnham.

“Eventually what we’d like to have is a handheld, portable instrument that is battery powered that you could take with you into field and analyze scats,” Burnham said. He has a working prototype — a poop-o-meter, if you like. He is also developing a way to gather and analyze scent from footprints that he hopes to test this summer.

The next step is to try out his approach on a large group of scats collected from wild Mexican gray wolves, and compare his results to those of current genetic-analysis methods.

To that end, Burnham set up a crowdfunding site to raise $3,000 for field time and equipment so he can head out into the BRWRA on a scat-collecting mission. He said he figures he needs 100 scats, which means collecting more than that since it’s hard to tell wolf from coyote poop in the field. 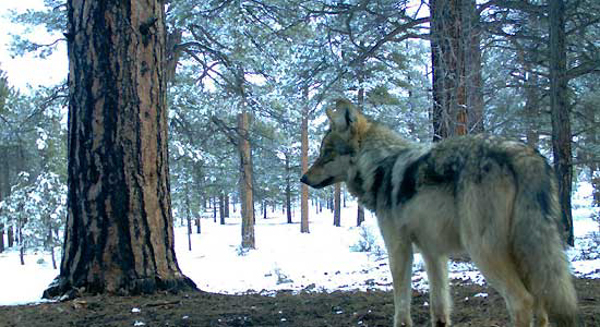 Burnham said he is confident he can get the method to work, and if so it should be useful for studying all sorts of wildlife. “I think it’s a great piece of technology for any animal that wanders over a large area, and especially for animals that are kind of elusive like wolves are: bears, mountain lions, and wildlife in Africa like lions and leopards and so on,” he said.

There’s no telling what else scientists might eventually be able to learn from the scent of an animal’s scat — its diet and immune status are good possibilities.

As for the Mexican gray wolf, bringing the top predator back to the southwest could unleash a cascade of positive ecological effects. Burnham pointed to Yellowstone National Park, where reintroduced gray wolves have reduced the number of elk and taught them to avoid grazing near streams.

“Streamside areas are a great place for a wolf ambush,” Burnham said. Absent the elk, streamside vegetation has grown lusher and more diverse causing a notable uptick in insect pollinators and other wildlife. “What we’d really like to see is for that same effect to happen here in the forests of the southwest.” 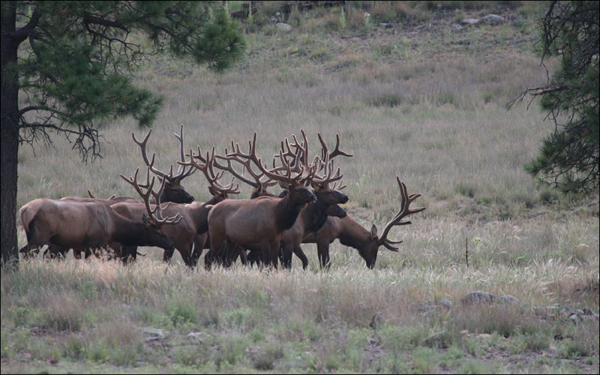 The Mexican gray wolf isn’t out of the woods yet, though. Their reintroduction has been controversial in ranching communities and illegal hunting remains a problem, even though there have been very few instances of the reintroduced wolves attacking livestock, according to Burnham.

If they do start picking off sheep or cattle, the USFWS has the freedom to either recapture or kill problem animals since the wolves are classified as an “experimental, nonessential population.” Two reintroduced wolves have been killed by USFWS since the reintroduction program began, the most recent one late last month after it took to approaching and watching people, including children. 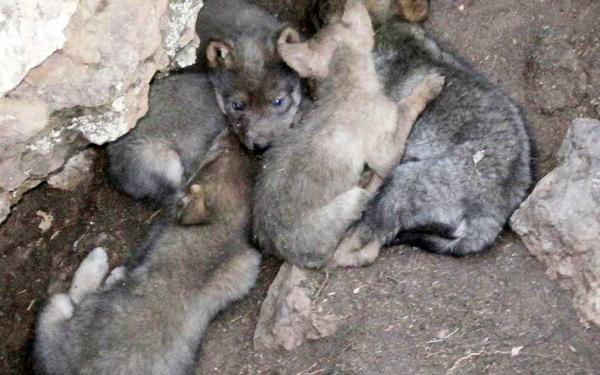