BLD Plantation Bhd, a Malaysian palm oil company, plans to clear some 14,000 hectares of peatlands in Sarawak, on the island of Borneo, potentially putting it in conflict with the deforestation-free sourcing policy established by American agribusiness giant Bunge, say campaigners who filed a grievance over the matter.

In a statement issued last week, Forest Heroes announced it has formally filed a complaint via Bunge’s grievance system in anticipation of BLD Plantation’s peatland clearance. The complaint urges Bunge to suspend sourcing from the company, which supplies the multinational with palm oil via the Kirana refinery in Bintulu, Sarawak. It also asks BLD to adopt a zero deforestation policy and restore an area of peatland equivalent to the 6,000 ha it has already cleared. 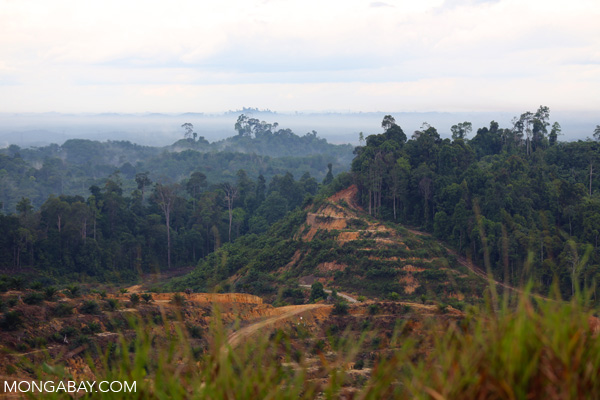 Forest cleared and planted with oil palm in Miri, Sarawak. Photo by Rhett A. Butler.

“Bunge is playing a constructive role in moving the palm oil industry rapidly away from the destruction of forests and peatlands, and supporting sustainable, legal development in Sarawak” said Forest Heroes chairman Glenn Hurowitz. “We are confident that Bunge will move quickly with its regional business partners and the Sarawak government to channel development onto areas that don’t threaten forests, peat, or Native Customary Rights land. Both the government and the private sector have recognized that Sarawak can continue to grow its agricultural economy and employment while protecting forests, peat, and communities, and it’s important to ensure that BLD doesn’t undermine this critical statewide initiative.”