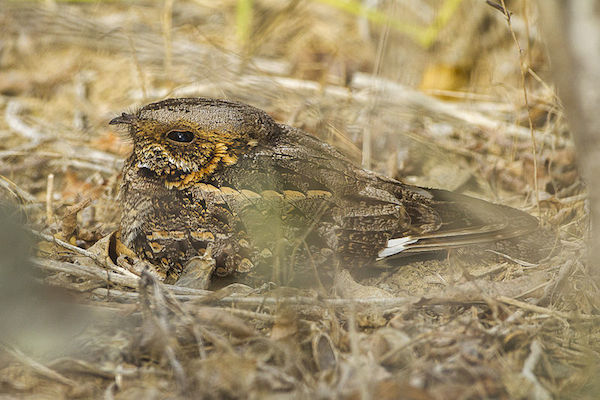 Many of the world’s endangered animals live in only one place, making them hugely susceptible to environmental upset. One fell swoop, and entire species could disappear from existence forever. New analysis shows that possibility may be edging closer and closer to reality in some areas, with forests known to harbor high-risk species losing an area of tree cover the size of Connecticut in a little over a decade.

In 2010, the Alliance for Zero Extinction (AZE) mapped out these sole areas of habitat for endangered species, finding 587 areas critical for the conservation of 920 species. Analysts at World Resources Institute (WRI) then overlaid tree cover satellite data on AZE sites using the forest monitoring platform Global Forest Watch to see how their forests had changed in the last decade.

They found that the world’s AZE sites lost about 1.2 million hectares of tree cover from 2001 through 2013, WRI published in its blog on Wednesday. Among the sites with the highest amounts of forest loss is one near Tarapoto in Peru. Straddling the eastern Andes front into the Amazon Basin, the site provides the only habitat for two species of endangered frogs — Rulyrana saxiscandens and sky blue poison dart frog (Hyloxalus azureiventris). But the area is only partially protected and it has lost more than 12 percent of its tree cover since 2001, according to Global Forest Watch, largely due to human settlement and agricultural activity such as palm oil plantation development.

Lack of official protection seems to be a theme throughout many AZE sites. The Itombwe mountains in the far-eastern Democratic Republic of Congo (DRC) near Burundi is a poorly explored, geographically isolated area, a large portion of which is currently earmarked for the country’s mining ambitions. The area is home to at least three endangered species found nowhere else: the Itombwe nightjar (Caprimulgus prigoginei), the Congo bay-owl (Phodilus prigoginei), and Hyperolius leleupi, a small, bamboo-dwelling frog. In addition to the mining threat, these species have lost habitat to agriculture. The bay-owl and nightjar were particularly affected after a corn blight reduced yields in the 1990s, forcing farmers to clear their forest habitat for more farmland. Global Forest Watch shows that the Itombwe AZE site lost more than 27,000 hectares of tree cover from 2001 through 2013, representing nearly 3 percent of its forests. The authors of the IUCN assessment for Hyperolius leleupi write that the need for protection of the Itombwe mountains is “urgent.”

Even sites that are designated as protected areas are experiencing habitat loss. Liberia is considered a “center of endemism in West Africa” by scientists. Yet, its forests have often borne the brunt of the country’s struggles with civil unrest and health crises, with its trees cut down to finance wars and its wildlife killed for bushmeat. Deforestation even appears to be happening in Liberia’s few protected areas. Global Forest Watch shows Zwedru National Park, a 67,000-hectare swath of forest in northern Liberia along its border with Cote d’Ivoire, lost 1,100 hectares of tree cover from 2001 through 2013. The area is designated an AZE site due to the presence of the critically endangered Liberian greenbul (Phyllastrephus leucolepis), an olive-green songbird found only within the park. Scientists estimate as few as 250 may exist in the world today due to habitat fragmentation from logging and agriculture. Indeed, a logging concession occupies half the park. 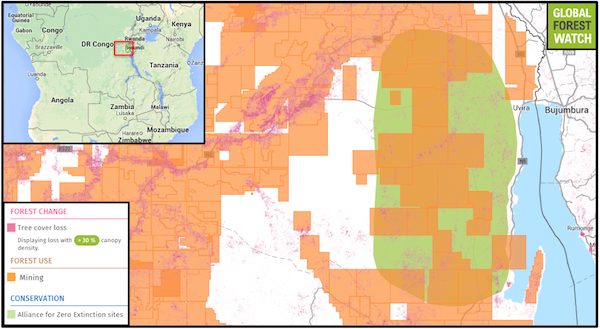 The Itombwe AZE site is home to three endangered species found nowhere else. Yet, like much of the DRC, mining concessions hold claim to a large portion of it. Click to enlarge.

Liberia’s only AZE site is also protected as a national park. However, that doesn’t mean it’s immune from development pressures, with a large logging concession occupying its eastern half. Click to enlarge.

To help protect what remains of Liberia’s forests, Norway agreed last year to provide development aid to Liberia in return for a logging ban and protected area expansion. Specifically, Liberia may not issue any new logging concession permits under the agreement, and must increase to 30 percent the amount of its land covered by formal protections.

World Resources Institute notes a positive finding from their analysis: AZE sites experienced less tree cover loss than in most other forested regions. The authors stress the importance of monitoring, managing, and protecting these sites and other areas of important habitat to conserve at-risk wildlife.