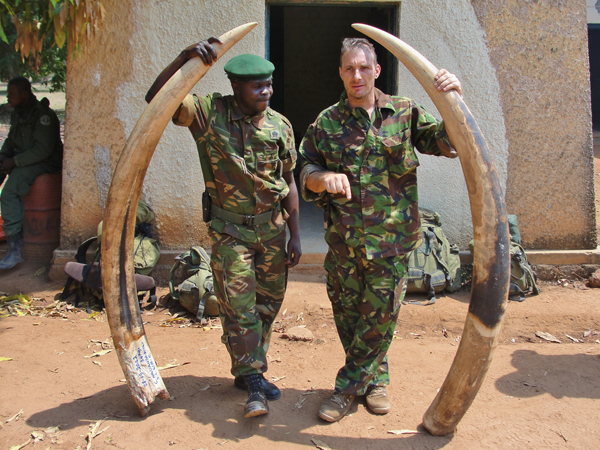 Elephant ivory seized from poachers in Garamba. Photo by: Jonathan Hutson for the Enough Project and Satellite Sentinel Project.

On April 25th, poachers shot and killed wildlife ranger, Agoyo Mbikoyo, in Garamba National Park in the Democratic Republic of the Congo (DRC), according to the organization African Parks. On the frontline of the illegal wildlife trade, Garamba Naitonal Park is known as a hotspot for elephant poaching, including a vicious slaughter last year that killed at least 86 elephants, many shot dead from helicopter.

“The untimely death of ranger, Agoyo Mbikoyo, leaves his wife without her husband and his children without their father and we extend our sincere condolences to them over their loss,” said Erik Mararv, Garamba’s park manager. “Agoyo will also be sorely missed by his fellow rangers for his commitment to conservation and his role in our fight against poaching.”

Mbikoyo had worked protecting elephants and other animals in the park for over seven years. African Parks, which currently runs the embattled protected area along with the the Institut Congolais pour la Conservation de la Nature (ICCN), noted that Mbikyo’s wife and children will be provided for under the organization’s accident policy. African Parks works with governments to take over management of struggling parks on the continent. The group is currently working in eight parks in seven countries.

A UNESCO World Heritage site, Garamba National Park covers nearly 4,920 square kilometers. Park officials believe poachers are infiltrating the protected area from South Sudan, some of which are with Joseph Kony’s Lords Resistance Army (LRA), which sells tusks on the black market to finance its criminal operations, including child soldiers and sex slavery.

Garamba National Park is home to less than 2,000 elephants currently—a 90 percent decline in the park’s population from fifty years ago.

A young elephant killed by poachers, one of 22 slaughtered in a single day in 2012 by a sharpshooter from helicopter. Photo by: Nuria Ortega/African Parks Network.