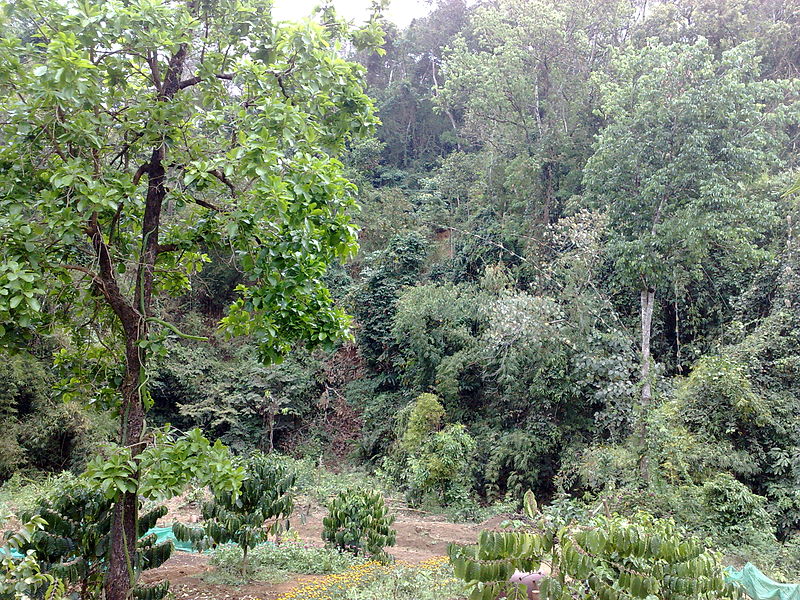 A proposed border checkpoint at Kbal Damrei, on Cambodia’s border with Vietnam, together with a new road leading up to it, may harm Cambodia’s Mondulkiri Protected Forest, according to a recent press release by WWF-Cambodia.

The proposed border crossing is slated to be developed within Mondulkiri Protected Forest, in Eastern Cambodia. Across the border in Vietnam is the Yok Don National Park, the largest nature reserve in the country.
“The only way to reach the border crossing would be through the protected area,” Thomas Gray, Manager of Species Conservation for WWF Greater Mekong, told mongabay.com.

The Srea Ampom-Kbal Damrei road, proposed to connect the Kbal Damrei border crossing, will cut across Mondulkiri Province, with about 36 kilometres of the proposed road within Mondulkiri Protected Forest, Gray and other experts from WWF wrote in a technical review. Of this, nearly 19 kilometres of the road is proposed to lie within a Special Ecosystem Zone of the forest, home to numerous threatened wildlife species including one of the largest populations of Asian elephants in Cambodia, the review notes.

“The road that will be constructed follows a request from Vietnam,” Svay Sam Eang, Deputy provincial governor of Cambodia, told The Cambodia Daily. “They requested it a long time ago and they requested it because they want a road which makes it easy to cross from Dalat province to Mondolkiri province.”
But Gray told mongabay.com that experts at WWF-Cambodia believe that the proposed border crossing, as well as the road, is completely incompatible with conservation and sustainable development.

Construction of the road has not started yet, he added, but if approved by the Ministry of Interiors, construction is probably likely to begin at the beginning of the next dry-season.

According to the review undertaken by WWF-Cambodia, the road is not likely to not add much value to the already existing infrastructure, communication and transport network within the Mondulkiri Province.

To make their case, the experts explain that no villages exist within a five-kilometer buffer of the 36-kilometer road. The nearest village to the proposed road is about 15 to 20 kilometers away, on the edge of the protected area, Gray said.

Moreover, four border checkpoints already exist at Keo Seima, Dakdam, Bousra-Namlyr, and Chimeat along the 210-kilometer border between Cambodia and Vietnam in Mondulkiri Province. These checkpoints are well-connected by existing roads and infrastructure that covers majority of the province’s population, the review notes.

“So there is insufficient evidence that the new proposed road will provide any net benefits to Cambodia,” the review adds. “In contrast the proposed road will increase pressures of deforestation, illegal logging, land encroachment, illegal hunting, and illegal wildlife and timber trade. This will affect the opportunity for the establishment of sustainable nature based tourism that would bring long-term return to local communities and provincial government.”

Mondulkiri Protected Forest continues into the Lomphat Wildlife Sanctuary in the northwest, and Phnom Nam Lyr Wildlife Sanctuary to the southeast. It also shares its borders with Yok Don National Park in Vietnam. Covering a total of over one million hectares, these protected areas together form one of the largest protected area complexes in Southeast Asia.

Cambodia’s forest cover has gone down from 72 percent in 1973 to less than 48 percent in 2014, according to data from Open Development Cambodia. 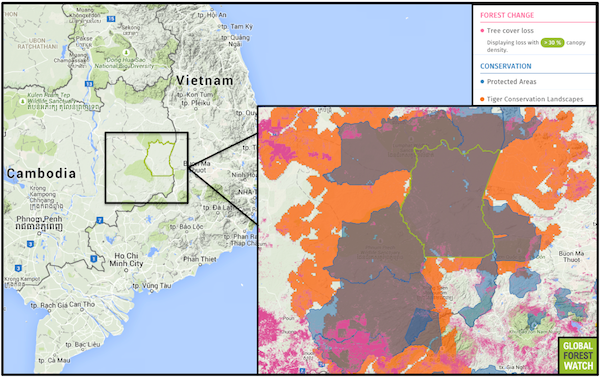 Global Forest Watch shows Mondulkiri Protected Forest (outlined in green) is located within TX2 Tiger Conservation Landscapes, which are areas with confirmed tiger presence, and where wild tiger numbers could double by 2020 through effective conservation efforts. Click to enlarge.

The two major forest types within this area – mixed deciduous, and semi-evergreen – are very important for the local communities for non-timber forest product harvest, the review states. Wild honey extracted from these forests, for instance, has an estimated annual value of over $10,000, the experts add.

Moreover, there are no roads inside Mondulkiri Protected Forest at present, Gray said. So the construction of a new road through the protected area could facilitate access for illegal hunting and timber harvesting. 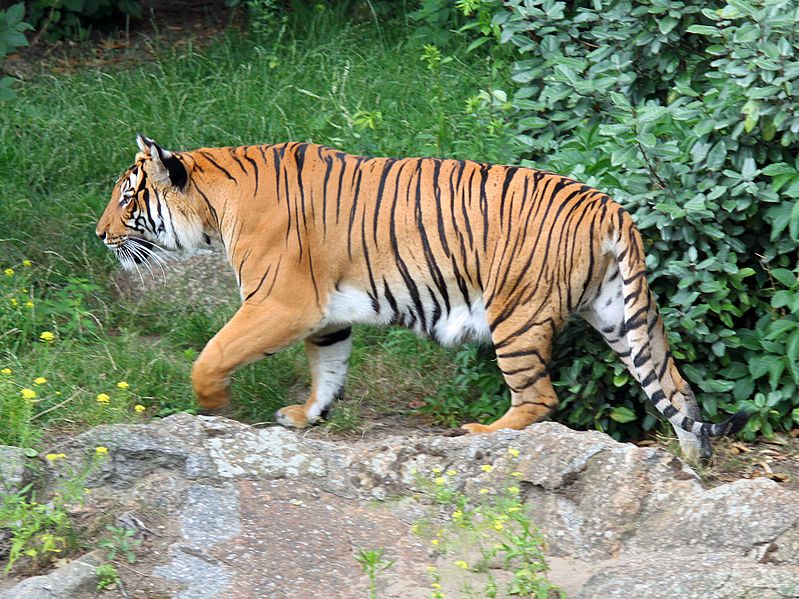 “A road improving access into this critical area for biodiversity would exponentially increase these threats; effective law enforcement to safeguard Cambodia’s natural resources would be difficult,” the review states.
The proposed road would also threaten the Cambodian government’s ambitious plans of restoring tiger populations in Cambodia, WWF warns.

Mondulkiri Protected Forest has been chosen as a priority site for establishing a delimited and inviolate tiger source site within the Cambodia Tiger Action Plan of the Department of Wildlife and Biodiversity, Forestry Administration.

According to the review, the proposed road will pass within two kilometers of the planned inviolate source site within the protected forest.

“Tiger restoration is a prestigious project for Cambodia and a unique opportunity for the Royal Government of Cambodia to become global leaders in effective species conservation,” the review states. “The proposed road would undermine all of these potential benefits and present a missed opportunity preventing Cambodia meeting its global obligations for tiger restoration.”

“Unfortunately both the spectacular biodiversity and the tiger reintroduction are in jeopardy if this border crossing and road are built through the core zone of the protected forest,” he said.