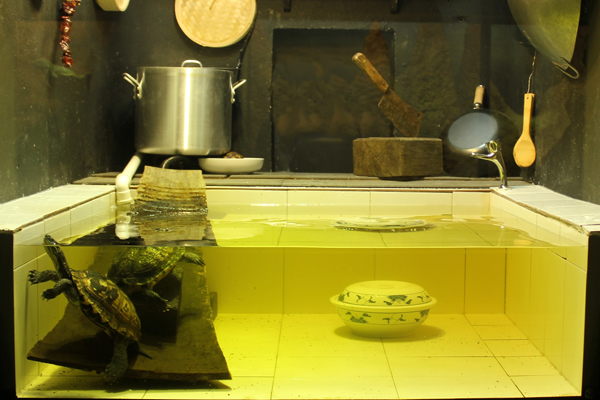 Usually animal pens in zoos are designed to resemble a species’ native habitat: lions in sprawling savanna, pandas in bamboo forests, and crocodiles in mangroves. But a new pen at the Zoological Society of London (ZSL)’s London Zoo is meant to dramatically highlight not a species’ habitat, but it’s biggest threat. Here, the Critically Endangered Annam leaf turtle (Mauremys annamensis) lives in a replica of a Vietnamese kitchen complete with butchering knife and woks.

“We’ve gone to town on the new Annam leaf turtle exhibit here at ZSL London Zoo, as we want our visitors to really understand the threats facing these animals,” said Ben Tapley, the team leader of the Reptile House at ZSL London Zoo. “Providing a great habitat for these beautiful turtles, with water for them to swim in and a secluded nesting area hidden behind a carefully positioned wok, the creative exhibit tells a serious story.”

The Annam leaf turtle, much like many other Asian turtles, is hugely threatened by overhunting for its meat, which is considered a delicacy. The species is only found in Vietnam.

“It has been estimated that more than ten million turtles are being traded for food, traditional medicine and the pet trade each year in Asia,” said Tapley. “Breeding programs and zoo populations like ours here at ZSL London Zoo, are becoming increasingly important in guaranteeing the existence of these animals for the future.” 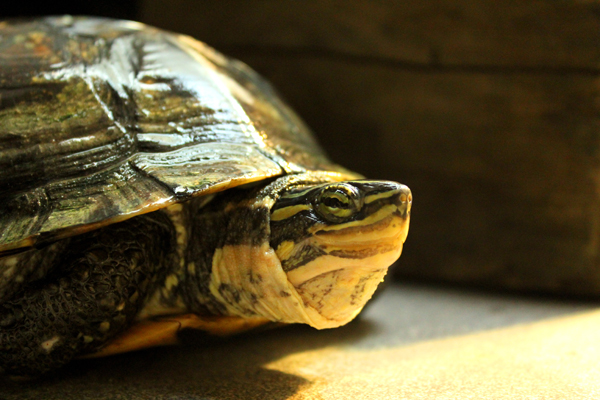