Motive not yet clear in nightclub stabbing of Indonesian environmental campaigner 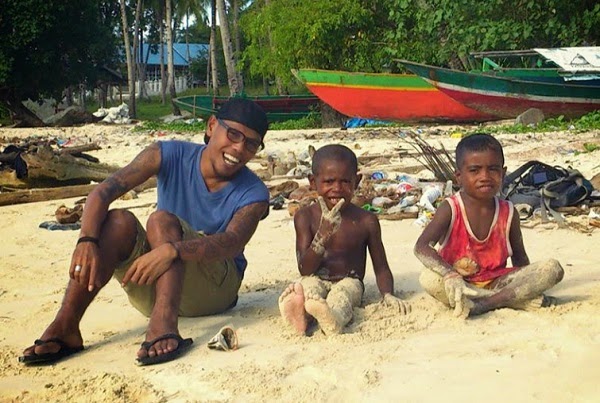 Slain activist Jopi Peranginangin posted this photo to his Facebook page in April. (The children are not his.)

An Indonesian activist who opposed unbridled oil palm expansion was stabbed to death before dawn this morning outside a nightclub in South Jakarta.

Whether the attack was related to his activism or the spontaneous result of a barroom brawl is not yet clear. But Indonesian media are reporting that one of the assailants shouted “I am a soldier” as he brandished the knife-shaped bayonet that killed Jopi Peranginangin, the 39-year-old head of campaigns for Sawit Watch, which strives for social and ecological justice in the palm oil industry. Reports are also highlighting eyewitness descriptions of the attackers as brawny men with military-style crew cuts.

“We don’t yet know the motive,” South Jakarta Police Chief Wahyu Hadiningrat said this afternoon as officers reviewed CCTV footage from the scene. “What’s certain is that before the stabbing there was a quarrel, but we’re not yet sure what the problem was.”

The head of Sawit Watch’s environmental department, Carlo Nainggolan, said Jopi’s friends and colleagues were waiting for the police investigation to determine whether the assault was premeditated.

“We are really sad but we hope that this doesn’t have any relation with the work,” Carlo told Mongabay. “But if so, we will stand to face it. We never run away.”

Globally, 116 environmental activists were murdered in 2014, including two in Indonesia, according to Global Witness. From 2002 to 2014, eight Indonesian activists were slain.

Earlier in the night, Jopi attended a concert of the Balinese band Navicula, which collaborated with Sawit Watch’s Stop Palm Oil Expansion campaign with a performance in Indonesia’s Central Sulawesi province in late 2013. A photo Jopi posted on Twitter later that night shows friends playing beer pong at what appears to be Les Moluccans, a bar in South Jakarta’s Kemang neighborhood.

At 3:30am, Jopi and friends arrived at Venue, a club in Kemang, according to a timeline provided by the Indigenous Peoples Alliance of the Archipelago (AMAN), one of Jopi’s former employers, and based on the account of a witness AMAN is keeping anonymous for the person’s protection.

When Venue closed at 4am, according to the timeline and also to various Indonesian media, one of the brawny men exchanged words with one of Jopi’s friends, and a fight broke out. One of the men removed a knife-shaped bayonet from his bag and fixed his eyes on Jopi. The men eventually pursued Jopi into a nearby parking lot where he was knifed in the back.

After that, Jopi’s friends rushed him to South Jakarta’s Pertamina Hospital, but doctors could not save him. He was pronounced dead at 6am. The blade had pierced his lung and caused massive internal bleeding.

According to news portal Kabar24, Jopi’s friend Galih left the group shortly after arriving at Venue to go rest in the car outside. When the morning call to prayer woke him, Galih was surprised the others had not returned. He tried to call Jopi but received no answer. Then he called someone else and was informed Jopi had died at the hospital.

“The night was fun, and I slept in the car,” Galih said. “Then in the morning I learned Jopi was dead.” 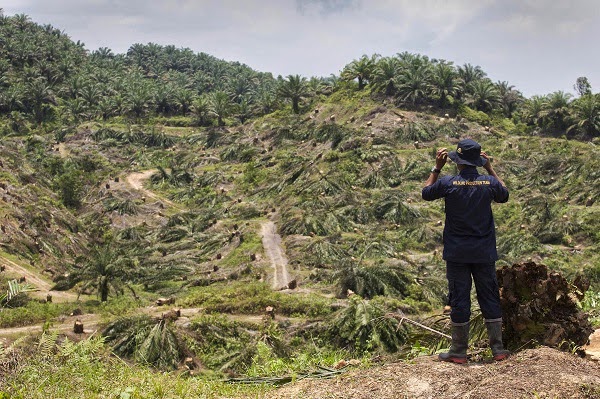 Slain activist Jopi Peranginangin surveys an illegal oil palm plantation whose trees have been uprooted in Aceh as part of a local government campaign earlier this year. Photo: Chaideer Mahyuddin/AFP

Jopi previously worked for Greenpeace as well as AMAN and Sawit Watch and was a member of pro-democracy groups around the time of the fall of the dictator Suharto in the late 1990s.

His recent work focused on oil palm expansion in Central Sulawesi, where Sawit Watch is campaigning for the passing of a local regulation on sustainable plantations with a focus on transparency, according to Carlo.

Jopi lived in Jakarta and commuted to the suburb of Bogor every day. He was single with no children, Carlo said. He volunteered for President Joko “Jokowi” Widodo’s campaign ahead of last year’s election.

He kept a blog, last updated in May 2014 before the vote. In that post he criticized candidate Prabowo Subianto’s environmental platform as “eco-fascist” in that it ignored indigenous peoples’ role in preserving forests and dependence on nature.

Another post suggests Jopi didn’t oppose oil palm per se but rather focused on how the rush to expand plantations was, in his words, “causing land conflicts, marginalizing indigenous communities, destroying forest biodiversity, criminalizing farmers – extra-serious excesses that are erupting everywhere. Excesses that absolutely must be addressed and parsed one by one, in a clear and objective way, if you do not want palm oil to continue to bring social disharmony at various levels.”

The original version of this story said Jopi was stabbed “by a group of men,” while according to the timeline provided by AMAN he was stabbed by one man from among the group he and his friends had the confrontation with. The story has been updated to reflect this.