Poison dart frogs (Dendrobatidae), named for their poisonous secretions used by indigenous tribes to coat blow gun darts, may possess another less deadly talent. According to a recent study, published in the journal Biology Letters, the curiously named brilliant-thighed poison frog (Allobates femoralis) can use its memory to find its way home through the rainforest.

A University of Vienna team set out to determine whether A. femoralis had spatial learning capabilities — the ability to learn, recognize and be guided by landmarks — allowing it to successfully plot a course to and from its territory in Neotropical jungle habitat. The team, part of the Femoralis Project, conducted the study over 3 months, working from its ‘Saut Pararé’ base in the Les Nouragues reserve in French Guiana where they’ve studied the frog since 2008.

The brilliant-thighed frog, named for its colorful legs, is diurnal and lives on the forest floor throughout the Amazon region. Males, the focus of the study, are highly territorial and are the absolute rulers of their small forest patch — averaging around 13.9 square metres (150 square feet). They loudly announce their virility to potential mates and warn away rivals, defending their territory against intruders in what study author Andrius Pašukonis described to mongabay.com as “prolonged wrestling fights.” 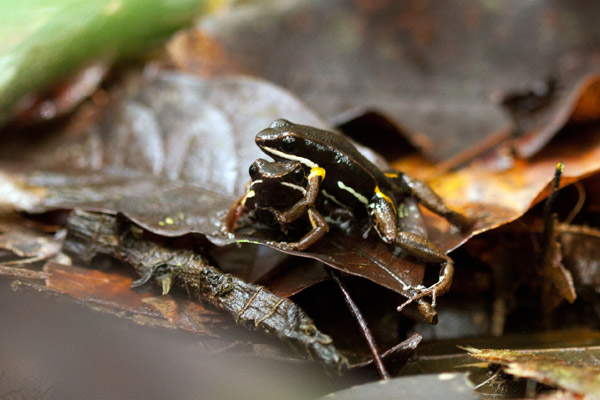 The densely vegetated habitat of A. femoralis presents it with unique homing challenges not faced by other species. To cope, the frogs have developed adaptations that allow them to regularly traverse their territories and beyond. “Tropical frogs show an extreme diversity in their reproductive and spatial behaviors, and dart-poison frogs show some of the most complex spatial behaviors among amphibians,” Pašukonis said. “Understanding these behaviors and their underlying navigational mechanisms will give insights into how environment shapes animal mental abilities.”

The male frogs regularly ferry tadpoles from nesting areas to flooded hospitable locations — anything from peccary wallows to a footprint. In the process of finding suitable deposition sites, the usually idle brilliant-thighed male becomes an intrepid traveller, carrying his offspring up to 185 meters (607 feet) away from his home turf. These excursions outside A. femoralis’ territory, covering large tracts of forest, are vital in prompting the creation of a spatial map so the frog can find its way back home.

“Tadpole transport takes many hours or even days,” the study notes. “This comes at a direct cost in the form of lost reproductive opportunities and the risk of losing the territory altogether.” Using spatial awareness to learn routes and, more importantly, remembering them, the frog can reduce time spent depositing tadpoles by taking the quickest path home.

“In order to say that the frog is spatially aware, it must be shown to ‘understand’ the relation between certain landmarks,” Pašukonis said. If, for instance, a frog’s territory lies beneath a particular ficus tree and the frog remembers that tree within its surroundings — just as we might remember a familiar street corner — and the frog uses the tree as a cue to help find its way home, then it can be said to be spatially aware. 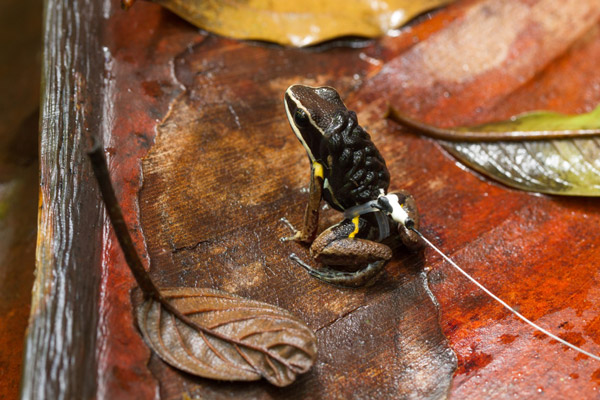 Tracking natural movements. Male brilliant-thighed poison frog (Allobates femoralis) equipped with a tracking device transporting tadpoles from his territory to a deposition site, which can be located as far as a couple of hundred meters away. Photo credit: Femoralis Project.

Other vertebrates have spatial learning capabilities, but little is known about this behavior in amphibians in general, or poison dart frogs in particular. What we do know, said Pašukonis, may be inaccurate: “In zoology classes frogs are sometimes presented as an example of a ‘pre-programmed’ animal that doesn’t rely on experience for successful survival and reproduction. We are trying to challenge this view by showing that at least some amphibians show very complex spatial behaviors that cannot be explained without implying advanced learning abilities.”

The researchers attached small transmitters to 46 highly territorial males in the wild. The frogs were then sealed in opaque, airtight containers, complete with rotating rod magnets, to deprive them of any sensory abilities that might allow them to navigate home.

The frogs were then moved. Some were deposited in habitat similar to their home territory, while others were placed beyond a river, which created a natural barrier to their movement. The researchers discovered frogs returning to their territory from within their own habitat had a remarkably successful homing rate, often taking a strikingly direct route back to their territory. In comparison, those on the other side of the river — a place to which they likely never would have travelled before — showed very little homing ability. 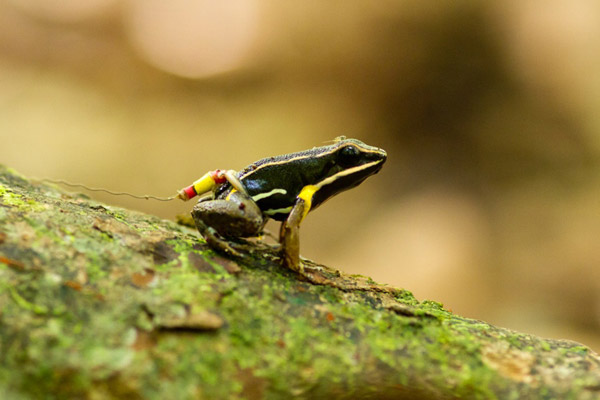 For the homeward bound frogs, traversing the forest floor may have been a breeze, however that wasn’t quite so for the scientists. “The main difficulty was to keep up with these little frogs in the rainforest.” Pasukonis said. The researchers were tracking them for up to 7 days — no matter the conditions. “These little frogs will easily run through areas such as big treefalls and liana tangles… at times we found ourselves in the middle of a tropical downpour climbing in a massive tree-fall listening for a faint signal.”

The scientists believe their results indicate the probable use of spatial maps. “The fact that the frogs choose a direct path home (during the experiment) when released in their local area, but are disorientated in an unfamiliar area demonstrates that experience with local areas is necessary for successful homing,” wrote the authors.

These results are important for the conservation of amphibians around the world with many facing extinction. According to the IUCN, 41 percent of species are now at risk.

Pašukonis believes that the learning capabilities his team observed in A.femoralis’ are likely to be shared by other species within the poison frog family. Learning how one species interacts with its environment will increase the capacity of conservationists to protect other amphibians. 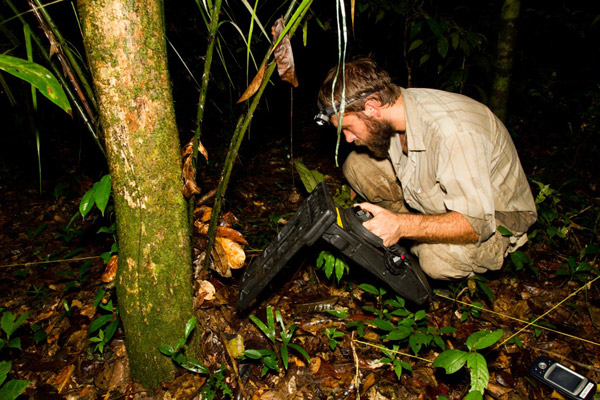 Bed time. Study co-author Ian Warrington, checking the sleeping site of one of the translocated frogs using a harmonic direction finder. Poison frogs are diurnal and they do not move at night. Photo credit: Femoralis Project.

“I strongly believe that we can’t protect what we don’t understand,” Pašukonis said. “For example, altering the environment in a certain way may disrupt the ability to navigate of the animals living there… and one of the commonly used conservation measures is captive breeding and reintroduction. If many frogs rely on learning about their environment for successful reproduction, it is crucial to understand at which life stage such exploration and learning occurs.”

The discoveries made by the University of Vienna team raised new questions about frog navigation, but this doesn’t trouble Pašukonis. The lack of research on how spatial awareness influences the functional development of A. femoralis’ brain only causes him to anticipate future study with relish.

“After sharing my fascination of how these tiny frogs navigate the complexity of the rainforest, one of the locals in French Guiana replied to me: ‘You know, living [in] the forest makes your brain work,'” said Pašukonis. “This could be a valid and actually testable scientific hypothesis!” 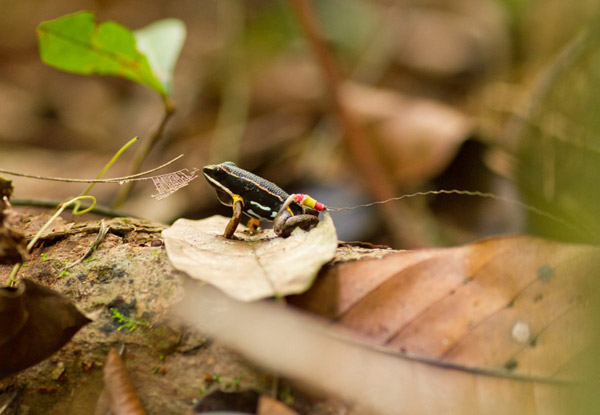